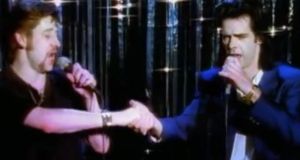 In a post for his Red Hand Files newsletter, the Australian singer and songwriter describes the collaboration between The Pogues and the late Kirsty MacColl as the “greatest Christmas song ever written” and says changing a word in the lyrics from a slur to “haggard”, as the BBC’s edited version of the track does, “destroys the song by deflating it right at its essential and most reckless moment... [meaning it] can no longer be called a great song”.

Fairytale of New York evokes a mud-slinging row between MacGowan and MacColl’s characters, an alcoholic and a heroin addict whose love has descended into vitriol.

Fairytale of New York stands shoulder to shoulder with any great song, from any time, not just for its sheer audacity, or its deep empathy, but for its astonishing technical brilliance

Describing the song as “under attack”, Cave says the idea that the lyrics can be changed without doing “significant damage” to it “can only be upheld by those that know nothing about the fragile nature of songwriting”.

Cave is close friends with Shane MacGowan, who wrote the song with his bandmate Jem Finer; he was responding to the BBC’s announcement that its Radio 1 will not play the original, 1987 version of Fairytale of New York this season because its listeners may be offended by some of the lyrics. It said that Radio 1’s young audience – the station is aimed at people between 15 and 29 years old – is unfamiliar with the track and “would find some of the words stark and not in line with what they would expect to hear on air”. It also noted that younger listeners “were particularly sensitive to derogatory terms for gender and sexuality”.

The BBC’s edited version alters two lines: MacColl’s character now sings “You’re cheap and you’re haggard” instead of “You cheap lousy f****t”. The BBC describes the other edit as “a word removed entirely” in the section “sung by Shane MacGowan in the second verse”. (This is when his character says to MacColl’s: “You’re an old slut on junk.”) BBC Radio 2 has decided to continue to play the original; BBC Radio 6 Music says both versions can be played, at individual presenters’ discretion.

In his post on the controversy, Cave, who lives in England, says “truly great songs that are as emotionally powerful as Fairytale of New York are very rare indeed. It stands shoulder to shoulder with any great song, from any time, not just for its sheer audacity, or its deep empathy, but for its astonishing technical brilliance.

The BBC, that gatekeeper of our brittle sensibilities, forever acting in our best interests, continue to mutilate an artefact of immense cultural value and in doing so takes something from us this Christmas

“One of the many reasons this song is so loved is that, beyond almost any other song I can think of, it speaks with such profound compassion to the marginalised and the dispossessed. With one of the greatest opening lines ever written, the lyrics and the vocal performance emanate from deep inside the lived experience itself, existing within the very bones of the song. It never looks down on its protagonists. It does not patronise, but speaks its truth, clear and unadorned. It is a magnificent gift to the outcast, the unlucky and the brokenhearted. It is as real a piece of lyric writing as I have ever heard.”

He added: “I am in no position to comment on how offensive the word ‘f****t’ is to some people, particularly to the young – it may be deeply offensive, I don’t know, in which case Radio 1 should have made the decision to simply ban the song, and allow it to retain its outlaw spirit and its dignity.

“The BBC, that gatekeeper of our brittle sensibilities, forever acting in our best interests, continue to mutilate an artefact of immense cultural value and in doing so takes something from us this Christmas.”

In a separate Red Hand Files post earlier this year, Cave said political correctness has an “asphyxiating effect on the creative soul of a society” and described so-called cancel culture as “bad religion run amuck”.