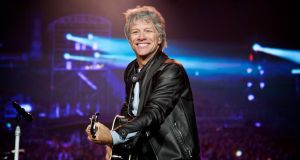 Jon Bon Jovi has raised eyebrows – and appalled some listeners – with his new cover of Fairytale of New York, The Pogues and Kirsty MacColl’s Christmas classic.

The American rock singer released his version of the hit on A Jon Bon Jovi Christmas, a three-track EP that also includes a cover of Elvis Presley’s If I Get Home on Christmas Day and Tom Petty’s Christmas All Over Again, on Monday.

To make his cover more radio-friendly, Bon Jovi has changed some of the lyrics. The original song’s most controversial verse now appears as: “You’re a bum, you’re a braggart/ You’ve lost all your swagger/ And the word around town is you ain’t much in bed/ You’re a squirrel ’cause you’re nuts/ You’re a kick in the gut/ Happy Christmas my ass/ I pray God it’s our last.”

The worst ever version of this song . Sorry Jon ... embarrassing and pointless https://t.co/PgJ5VcKywP

The Pogues have responded to the song by retweeting the dismayed reaction of the Irish musician and DJ Rob Smith: “It’s the worst thing to ever happen [to] music... Thanks a lot, Jon. Kid’s crying now, saying ‘Christmas is ruined’.”

Steve Lillywhite, who produced the original, and was married to the late MacColl when the song was first released, in 1987, tweeted: “The worst ever version of this song. Sorry Jon... embarrassing and pointless”.

The YouTube video of the new recording has more than three times as many thumbs-downs as thumbs-ups, plus more than 1,000 mostly negative comments.

“Sweet Jesus. He has absolutely murdered it. That’s appalling. If it ain’t broken don’t fix it,” one listener writes. Another comments: “2020 just gets worse and worse, oh holy god.”

Listeners also point out that it is odd for Bon Jovi to sing both parts of the duet himself. The version sung by MacColl and Shane MacGowan spent 109 weeks on the official Irish singles chart, appearing in 17 separate years.