Plus: songs you have to hear from Gabe Gurnsey and Spies 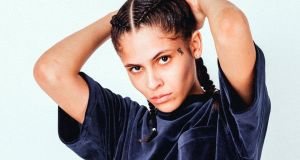 Danielle Balbuena aka 070 Shake: snapped up by Kanye West’s label in 2016

Why: It’s easy to hear why Danielle Balbuena was snapped up by Kanye West’s label in 2016 and promptly put to work on his recent Project Wyoming albums. The New Jersey singer possesses a voice that sits in an androgynous sweet spot that can cut through any type of genre or geographical trend.

Before the New Jersey singer’s big debuts this year, she had started out writing poetry, which soon begat writing over beats, which led to working with the 070 collective (a New Jersey zip code) and racking up Soundcloud plays in the thousands for her heartfelt R&B and hip-hop tracks.

It wasn’t until this year that her adaptability became obvious as a participant in three of Kanye’s ProjectWyoming albums. Whether it was on the memorable Spanish-sung hook of Pusha T’s Santeria, Not For Radio – the opening track of Nas’ Nasir LP – or Kanye’s Violent Crimes from Ye, 070 Shake sucks the air and occupies all of the frequencies with her contributions.

070 Shake’s voice emotes all-caps feelings, has a tone that bleeds raw emotion and catharsis without shedding a versatile pop hook timbre. Nowhere is this more evident than Ghost Town, the Ye standout where 070 Shake reflects the song’s destructive but breakthrough second half. “I put my hand on a stove/ to see if I still bleed/ and nothing hurts anymore/ I feel kinda free,” she sings with ecstatic purgation.

Whether drenched in Auto-Tune, or singing in a style close to reggaeton or a straight-up pop hook, Balbuena’s voice is always memorable, and we’re going to be hearing a lot more of it.

Gabe Gurnsey’s other band Factory Floor are known for excelling at square-wave synths and elongated krautrock electronic music. The musician’s new solo album Physical is more corporeal than escapist, with a narrative based around the recreation of a night out. While the theme is loose, the music is tactile, sweaty and drawn towards electro, disco and pop. The rough edges are still there, yet the workout is filled with sweet release.

Spies’ lead singer and lyric writer Michael Broderick wrote the lines of this song while on holiday in Vietnam, hence the titular reference to the city named after the country’s Communist leader. The song is certainly better than a postcard, with the declarations of love and friendship from the Dublin indie-rock band set to gentle synths, cascading background vocals and imbued with melodic brightness. It’s the latest in a line of songs from a band reinvigorated in the lead-up to their new album Constancy, out November 23rd.

Are the Irish different? Getting to the heart of the national psyche