Icebreaker at the NCH; Lisa O’Neill and Junior Brother in Galway; Eve Belle at Whelan’s 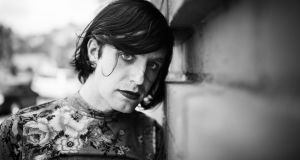 Icebreaker
National Concert Hall, Dublin
This UK-based new music interpretive group has been around almost 30 years, and specialise in blending amplified classical and minimal music with rock and post-rock. With previous projects focusing on the music of Kraftwerk and Scott Walker, this year (the 50th anniversary of the moon landings) seems apposite to revisit Brian Eno’s Apollo: Atmospheres & Soundtracks album. Icebreaker’s rendition of it will be performed to a film of the Apollo space mission, and the concert will also include forays into Scott Walker’s Epizootics, Gavin Bryars’s The Archangel Trip, and music by Anna Meredith. TCL

Ezra Furman
Cyprus Avenue, Cork. Also Wednesday 24, Button Factory, Dublin; Thursday 25, Róisín Dubh, Galway
Chicago songwriter Ezra Furman is an artist of many layers. His background is alt.rock with various strands thrown in for good glam/sex measure. His two most recent albums – 2015’s Perpetual Motion People and 2018’s Transangelic Exodus – helped to raise his profile far above the counter. Add in, also, his soundtrack work for Netflix’s drama-comedy show, Sex Education, and you have a rising (if, perhaps, still somewhat niche) songwriter that we can look forward to hearing from Cork to Dublin to Galway. The latter gig, by the way, is part of Galway International Arts Festival. TCL

Action Bronson
The Academy, Dublin Once hailed as “one of the most promising prospects in New York hip-hop”, Action Bronson matches his staunch musical output with a bold n’ brashy personality. Having studied in the Art Institute of New York’s culinary programme, the Queens rapper doubles as a food lover. With song titles like Roasted Bone Marrow, Pouches of Tuna and Jerk Chicken and a side gig as the host of Viceland’s food documentary show F*ck, That’s Delicious, he is, as Lizzo says, not a snack but the full meal. LB

The Wailers
Vicar Street, Dublin. Also Wednesday 24, Cyprus Avenue, Cork
Fronted by bassist and founder Aston “Familyman” Barrett and joined by Wailers guitarist Donald Kinsey, the reggae band keeps the promise made to Bob Marley to “keep the Wailers together”. Since Marley’s death in 1981, the line up has changed – with children of some of the original members stepping in to play – but their music finds new fans in every generation. One of the most influential groups in music history, this gig will be a celebration of their legacy. LB

Eve Belle
Whelan’s Upstairs, Dublin
Between Eve Belle’s 2018 EP, Things I Once Believed, and her very recently released EP, The Fine Line Between Brave and Stupid, she has delivered almost a full album’s worth of material in less than 12 months. That’s good going for a singer-songwriter who has, generally speaking, been keeping a low profile as she hits the study books in Dublin’s Trinity College. A really good songwriter who can swerve her way in and out of emotional issues without crashing into anyone, this is Belle’s debut headline Dublin show – make her remember it for all the right reasons, eh? TCL

Lisa O’Neill and Junior Brother
Róisín Dubh, Galway
Ah, now, this is a pairing we have been waiting for for over a year, and so kudos to whoever made it happen. Cavan’s Lisa O’Neill, as many people are possibly aware, is one of the most intuitive chroniclers of the human spirit, while her delivery of songs is, to say the least, singular. Like O’Neill, Kerry’s Junior Brother (aka Ronan Kealy) is what you could euphemistically describe as an alternative folk singer, but his stylings are slightly more atonal. Borrowing as much from England (notably the arch-traditionalist Waterson/McCarthy clan) as America (musicians such as primitive guitarist John Fahey), Kealy is something else altogether. As is O’Neill. As part of Galway International Arts Festival. TCL

Two Door Cinema Club
Heineken Big Top, Galway
Noted in some quarters for being the only winners (to date) of the Choice Music Prize award to donate their prize money (a cool €10,000, for their 2010 debut album, Tourist History) to charity, Co Down’s Two Door Cinema Club bring their recently released fourth album, False Alarm, to Ireland for the first time. Having a good reputation for their live performances only adds to the treats you’ll hear at this one. Special guests are another guitar-gifted Irish band, All Tvvins. As part of Galway International Arts Festival. TCL

Kerbdog
The Limelight, Belfast. Also Saturday 27, Whelan’s, Dublin
Kerbdog? The rock group from Kilkenny that, back in the mid-late 1990s should have and could have? The group that has 2FM presenter/producer Cormac Battle in its ranks? The group that Biffy Clyro’s Simon Neil has said are “one of the most underrated bands ever”? Yes, the very same. Now older and wiser, they are back together for random shows, but don’t for a second think that Kerbdog plan to undersell their much-admired back catalogue with middle-aged fatigue. These musicians were early masters of the monster riff/melody combo, so expect body shocks aplenty. The Dublin show is sold out. TCL

An Evening with Kim Gordon
IMMA, Royal Hospital Kilmainham, Dublin
Well known to music fans as a co-founding member of Sonic Youth, multi-disciplinary artist Kim Gordon is in Dublin for a few things. Firstly, she will be presenting a solo exhibition, She Bites Her Tender Mind, featuring paintings, drawings, and sculpture. From 7pm, however, in the IMMA courtyard, Gordon will feature in a live performance with her experimental electric guitar unit, Body/Head, guitarist Heather Leigh and poet Elaine Kahn. If any Sonic Youth songs are played (which we doubt) expect them to be fundamentally recalibrated. Gordon will also take part in a public interview with writer/essayist (and music lover) Sinéad Gleeson at The Lighthouse cinema at 2pm. TCL

Orbital
Heineken Big Top, Galway
With only the occasional hiatus, brothers Phil and Paul Hartnoll have been going strong since 1989 as Orbital. Like Booka Shade, they’re regulars on the festival circuit and for a very good reason; they can lift you up and out of any bad mood. If in doubt, check out Tiny Foldable Cities taken from 2019’s Monster Exist album. It’s a stone cold summer anthem. Supporting them is Daithí, who will have Bell X1’s Paul Noonan, Sinead White and Elaine Mai joining him onstage for their collaborations. LB

Josh Ritter
National Concert Hall, Dublin. Also July 28, same venue
With this show selling out swiftly, the promoters were quick to put on another one (July 28th). Ireland, it seems, still can’t enough of Josh Ritter, the US singer-songwriter who has made some good friends in this country since he first arrived here 20 years ago. As good a songwriter as they come, Ritter (and his Royal City Band) will be plugging his latest album, Fever Breaks, the songs from which are (this paper concluded) “infused with first-rate lyrics typical of a person who majored in American history through narrative folk.” TCL

Lumo Club #46: Summer in the City
Yamamori Tengu, Dublin
Joe Cocker once sang, “Come on, come on and dance all night. Despite the heat it’ll be alright and babe, don’t you know it’s a pity the days can’t be like the nights in the summer in the city” and do you know what? He’s dead right. Join Nialler9, Gavin Elsted and Simon Roche for an extra sizzling dose of Lumo. Along with the usual suspects like Phil Collins and LCD Soundsystem, expect some summery tunes from 10cc and Arthur Lee. LB

Booka Shade
Monroe’s, Galway
German house duo Booka Shade are well acquainted with the Irish music festival circuit, appearing at either All Together Now, Forbidden Fruit, Electric Picnic and Metropolis almost every year since 2009. Reliable as they are consistent, you can count on them for a good time and while they’re not part of the Galway International Arts Festival, a night spent with them will be the perfect finish to the day. Check out Understanding, their latest EP, to get you locked and loaded for this one. LB

Mary Coughlan
Daly’s Storehouse, Boyle, Co Roscommon
Quality and talent will always last, and so for over 30 years (and a bit more) Mary Coughlan has been presenting smouldering and often boisterous performances that have mixed blues with jazz, pop and folk. Her shows, however, are also invested with life experiences, triumphs, joys and regrets (of which you might say she has had a few), so when you hear Coughlan deliver a particularly bittersweet song you know there are strong hints of herself in there. In one word? Classy. As part of Boyle Arts Festival. TCL