Swinging Sligo: how a jazz school won over the west

Every year the Sligo Jazz Project puts internationally renowned musicians in a classroom with students for the serious business of improvisation, followed by gigs in the town 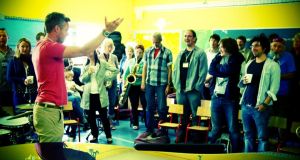 School of jazz: every year, the Sligo Jazz Project assembles a roll call of internationally renowned musicians and puts them in a local national school with a group of students from all over Europe

Rufus Reid has travelled the world and seen more than his fair share of jazz festivals, but the famous bass player has always felt particularly at home at Europe’s westernmost jazz festival and summer school, which has swung into Sligo town this week.

He suspects however, that it’s not just him. “My wife and I would walk down the street and everyone would be very friendly. But I think that’s normal,” he says, with a wry laugh. “I’d like to think it was specially for us, but I think Sligo people are like that, period.”

Reid isn’t the only jazz star to be attracted by the special Sligo vibe. Every year, the Sligo Jazz Project assembles a roll call of internationally renowned musicians, puts them in a local national school with a group of students from all over Europe, and together they get down to the serious business of improvisation. But if the style of the music is mostly downtown New York, the vibe is very much small-town west of Ireland.

The driving force behind the project is bassist and former Nervous Animal Eddie Lee (remember My Friend John?). Speaking to him, you get the feeling even he can’t quite believe what a positive environment for jazz he and his fellow volunteers have managed to create west of the Shannon, since their first festival in 2005.

“When it started, we were just four Sligo musicians, the kind of guys who had been playing music all our lives but had never been educated in a jazz way. So we decided to get some people in to help us.”

The first person Lee called was Sligo-born jazz guitarist Mike Nielsen, who has trained at the prestigious Berklee school in Boston and is director of jazz performance at DIT Conservatory of Music. Nielsen was delighted to help out in his hometown, and began suggesting other musicians who might be persuaded to come.

Now, eight years later, Nielsen is still on the faculty and puts the growing reputation of the project among musicians down to the way Lee runs things.

“Eddie knows what musicians want, and he’s able to speak to them as a musician, so the vibe comes from the top down. And because it’s held in the national school, close to where everyone is staying, it’s just a very close community. We all sit and have lunch together, and it’s all just like one family.”

Heavy hitters in town
As well as local heroes such as Nielsen, and international stars such as Reid, over the past eight years the faculty has included heavy hitters such as drummer Paul Wertico, pianist John Riley, vocalist Norma Winstone and bassist Dominique Di Piazza, while the festival’s evening concerts have featured high-profile bands such as the Yellowjackets and the influential Avishai Cohen Trio.

To the uninitiated, Sligo might seem an unlikely location for such big names, but there is a sense of dynamism within the local artistic community that feeds off the energy generated by the project.

“Making things happen seems to be a way of life around here,” says Marie O’Byrne, director of the Hawk’s Well Theatre, the main venue for the evening concerts.

Originally from Ennis, O’Byrne moved to Sligo two years ago and was immediately impressed by the energy in the local arts scene. “Sligo has a long history of being progressive. The Hawk’s Well [Theatre] itself was born from the endless work of the people of Sligo, and festivals such as Sligo Live, the Yeats International Summer School, and of course the Sligo Jazz Project help keep the creative juices powerfully flowing around here.”

Werner’s warning
This year’s headliner is US pianist Kenny Werner. Author of the definitive jazz self-help book Effortless Mastery – an inspirational tome, well-thumbed by the current generation of musicians – Werner is as impressive in the classroom as he is on stage. But he is realistic about the stern challenge involved in becoming a jazz musician – “this is something they should be talked out of” – and students looking for an effortless route to mastering this complex music will be disappointed.

“The word ‘effortless’ is the most misunderstood word,” says Werner with a theatrical sigh. “It doesn’t mean you didn’t make an effort to get there. But if you watch a great golfer, does he look like he’s making an effort ? Or does it look like his body does it by itself? That’s what effortless means. It’s about getting out of your own way, learning how to master your own mind so that you can maximise your own creative potential.”

With teachers of the stature of Werner, the project is attracting an ever-greater number of international students, and unlike other jazz schools around Europe, there is room in Sligo for all levels.

“There’s such a mixture of people,” says Lee. “We have professional musicians, and semi-pros, and then you have retired people who never got a chance to work on their instrument before – and then there’s the younger students, some of them only 14 or 15.”

Dublin drummer Stephen Kohlmann, a veteran of several summers in Sligo, is enthusiastic about the positive spirit of the week, even for those who don’t play any instrument. “Even if you just went to the gigs, with the amount of quality musicians that are there, it’s like being in New York for a week.”

Pianist Orla Cunningham is an optician by day, but Sligo has opened her eyes as a musician, and for her, the special vibe is down to the tone set by the tutors. “It’s very down-to-earth; there’s no them and us. The teachers are very supportive, whatever your level, and really good about passing on what they know.”

As well as studying and eating together, the students get plenty of opportunity to play together at nightly jam sessions, but in a town that is famous for traditional music sessions, there was always the chance of some resentment at the influx of foreign music. But the project has been a model of inclusiveness, reaching out to the wider musical community, and the local trad musicians have embraced the improvisers.

This year, Lee collaborated on a piece of music, the Barinthus suite, with Belfast drummer David Lyttle, which blends trad and jazz, to be performed on Thursday by an admirably diverse ensemble, including many of the course tutors, with Werner at the piano, along with Manchester bodhrán master John Joe Kelly and piper Tyler Duncan from progressive trad group the Olllam.

For Werner, the whole concept of the jazz summer school is a good model for other art forms, putting different levels of musicians together in one place, drawing on the experience of acknowledged masters of the art, and delivering more intangible benefits to the wider community.

“I think a summer school energises the town it’s in, it energises the audience, and above all, it energises the musicians. It’s like a happening, and we as musicians get great forward motion from the camaraderie, and just the intention that we express by going somewhere where that’s all you’re going to think about for a week.”