Bob Dylan smiles on Kilkenny, but the night belongs to Neil Young 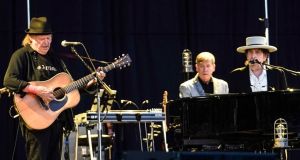 Bob Dylan and Neil Young are among the great undimmed icons of their generation, and a double-date with the duo was always going to be an occasion to savour. And so it proves as protest pop’s twin-headed Mount Rushmore – Dylan is 78, Young 73 – serve up a septuagenarian two-hander for the (rock of) ages.

The gravitas and the inscrutability is of course courtesy of Dylan, sporting a pill-box hat and an enigmatic grin.

Young, his hat more conventional, chimes in with power-chords and songs you can sing along to (seldom a priority with Dylan across the past 40 years).

There’s a legitimate surprise, too, as Young joins Dylan and his band for a jaunty run through Johnny Cash’s Will the Circle Be Unbroken. It’s the first time they have played together since 1992. And also possibly the first time since 1992 that Dylan has beamed in public like a schoolboy.

Otherwise Dylan delivers one of those performances that has been his mainstay for the past several decades. He comes not to honour his back catalogue but to interrogate and complicate it. Blowin’ in the Wind, trotted out during the encore, is, for instance, dismantled and built back up as a fragmented, fiddle-infused torch song. All the elements of the original are there. But Dylan, his voice a passionate rasp, wants us to put them together for ourselves.

This is less a trek down memory lane, then, than a revisionist plunge into one of the most sanctified repertoires in rock. Thus Like A Rolling Stone is re-shaped as a jazz inflected funk jam. The crowd bravely try to sing along. Every time the chorus rumbles around, Dylan finds a way to catch them out.

Can’t Wait and When I Paint My Masterpiece are similarly subjected to deconstructive pummellings. Around Nowlan Park, fans are, as ever with Dylan nowadays, torn between delight at his refusal to become his own glorified covers act and amusement at his disinclination to simply bang out the hits.

Either way, nobody could accusing him of dialing it in. He’s still rock’s awkward customer and he still declines to be boxed in by his audience’s expectations.

Young, who takes to the stage at shortly after 6pm, following opener Glen Hansard, doesn’t quite blow Dylan away. But he does demonstrate you can give the masses what they want while also forging forward artistically.

Young rolls in to Kilkenny from Hyde Park in London where he and Dylan performed beneath the same banner on Friday (though they did not sing together).

The London concert almost came unstuck when Young discovered it was sponsored by a bank. He declared the institution’s involvement a “huge f**k-up” leading to the quiet scrubbing of Barclaycard’s name.

Clearly he has fewer issues with Kilkenny hurling and is cheerfully garrulous at Nowlan Park. With his latest band Promise of the Real (who have come here straight from 1976 and feature Willy Nelson’s son Lukas on guitar) Young is happy to swing back to his peak years, with a particular focus on 1990’s return to form Ragged Glory.

In the blazing teatime sunshine, he opens with Like An Inca (is its chorus “like an Inca . . . like a skipping, rolling stone” a wink towards Dylan?). He next plunges into a grizzled Mansion on the Hill and raises the temperature in the baking venue with country rock pile-driver Over and Over.

It is the very best kind of racket. It is also in contrast to his eardrum-shredding 2013 Irish tour with Crazy Horse, when he cheerfully frightened the bejaysus out of everyone.

A blown cable on stage – “I don’t know what that means” – gives him pause. But he soldiers on into Heart of Gold. The first singalong of the night breaks out.

Young occasionally ventures a smile (“this is our transition,” he deadpans as the tuning up threatens to go on a bit). And unlike his troubadour chum Dylan, he played the hits in largely recognisable form.

From Hank to Hendrix and Everybody Knows This Is Nowhere waft in the pale sunlight. Loudest of all is Rockin’ In The Free World, the 24-carat chugger with which Young accidentally invented grunge. Dylan diehards may take issue but for the neutral supporter at this compact county ground, bragging rights go to Young.