The Atrix: Legends back from the wasteland

Cult new wave national treasures The Atrix return with a gig, a CD and new material 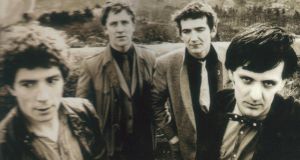 The Magnet Bar. Pearse Street. Late 1980. The Atrix play. Swirls of image and lyrics, vectors of vivid and deft poetics layered across the kaleidoscope of Chris Green’s keyboard. The circus. The music hall. Like off-kilter piano leaking from the College of Music on Chatham Street. Hugh Friel’s drums are manufacturing frantic strange beats: the pulse of an excess-chambered heart that speeds and almost goes too fast but then stops terrifyingly for a fraction of a second before resuming. And Dick Conroy is pounding the Yamaha bass, its strings deep tonal safety ropes that secure and propel every tune. John Borrowman sings: “The agony of watching your life/Makes it hard to watch my own.”

The Moon is Puce (1979) and Treasure on The Wasteland (1980) brought The Atrix to the public’s attention. As had the Pat James Show on Radio Dublin, where one night in 1979, Hugh and John spoke about their new demo tape as DJ James generously played all four tracks for those taping out there in the pirate dark.

The band’s mythical inception is at Number 2, Beresford Place. Close to Busáras. Three young men rent it for £10 a week. Friel. Green. Borrowman. They start to write songs. Conroy is about to find the ley line and join them in The Atrix.

It’s 1979. Dublin’s city centre is derelict. People give out stink at bus stops. The Atrix drink in The Flowing Tide. The Palace. Mulligan’s. They go back to Beresford Place. The music seeps out from a capital whose duty is to be congested. “The traffic roared past,” says Friel. “Words like juggernaut and Datsun. We loved the sound of a word and how it goes into music. Jugg/er/naut. Dat/sun. We pared it down. That’s how City Syndrome came about.” City Syndrome was never released.

“We moved to a house in Ringsend at the end of Pigeon House Road. Number 78. Before the East Link bridge was built. We were caretakers. Treasure on the Wasteland was written there.” The mantra of the schoolyard informer which became its chorus – “Oo-e-oo-e-oo-e/Oo-e-oo-e-oo-e” – rang out often over national radio.

“It was a very small world. You could do a demo in Keystone Studios. And that evening have it on Dave Fanning and the other pirates. In Dublin magazine was starting up and Hot Press was there. It was a great town. Everyone was around.” Number 78 Pigeon House Road is long-demolished.

“The Atrix were in the zone of intelligent art rock like Television and Talking Heads, like XTC, Magazine and Wire. Their sound and quirkiness was left-field. Not straight rock ‘n’ roll, something far smarter,” says guitarist Paddy Goodwin. “Of all the front men at that time, John Borrowman was streets ahead. He had class. There was an aura to him that was exceptional.”

The Atrix got support slots with The Stranglers, Lena Lovich and Toyah. In 1981, they toured the UK with The Boomtown Rats, who’d had a number one with I Don’t Like Mondays. The two Dublin bands packed out the Rainbow and the Hammersmith Odeon. “The NME were raving about our band,” says Friel. “We knew it: the whole thing was there.”

The return to Dublin jarred. “The timing was great for the gigs but the back-up wasn’t there. Money was going on the costs. Billy McGrath, our manager, was good. But it was hard to go back to gigging around Ireland. We did a gig in Trinity, on the lawn. I remember feeling ‘This isn’t fun anymore.’ We never broke up. It just came to a halt. We would never have remained friends. We’d done three years.”

In the rich and lucid world of The Radiators, The Blades, DC Nien, early Microdisney, Chant! Chant! Chant! and Meelah XVIII, many deemed The Atrix better than U2. Could things have gone differently?

“I think events went just the way they should have gone. There are no regrets. U2 got where we all wanted to go. We wanted as big an audience as possible. But you cannot grow as a person if you are in a gang all your life. It would have taken outside people and money.”

“U2 went in the targeted direction of the American market and Island Records went with them. Then there was a recession and Stiff Records and other companies were going under. No one was going to take a risk on a left-field band. It was the same for all the bands. Nobody got a deal like the deal U2 got.”

Around 2004. A laneway off Castlewood Avenue in Rathmines. Across the vertical ripple of rusting, corrugated iron, a band’s name is scrawled in survival graffiti. The Atrix.

Friel is big-hearted and dedicated to music and painting. Reigniting the band with Dick Conroy, he has shifted to singing. With Horslip Jim Lockhart on keyboards (Chris Green is not well), Shane Power on drums and Drogheda-based solicitor Paddy Goodwin – who has played with everyone from The Radiators to MC5’s Wayne Kramer, and Paul Brady to Horslips – on guitar, The Atrix return with a gig and a compilation CD. These complex songs produced by Phil Chevron, Midge Ure and John Leckie are brilliant exemplars of the intelligent new wave. And placed on the CD in a better order than the Procession album (1981).

“Hugh is so immersed in these songs,” says Goodwin. “Some might ask why we are coming back without John Borrowman. Hugh is a fantastic drummer, but also a fantastic singer. He takes on a different persona and brings an intensity to these songs. It is astonishing. There’s a spark that happens.”

“I am very happy to be playing old Atrix songs,” says Hugh Friel. “But new stuff too. You can’t become a tribute band to yourselves. In three years, I’ll be 70. You can do a lot in three years. We have two new albums nearly done. All new songs. This is a band called The Atrix. The old and the new. This is the start.”

The Atrix play The Sugar Club on Thursday, September 19th. They will be launching the compilation CD “The Atrix: Dublin 1979-1981”. A panel discussion about the band’s significance precedes the gig.

Borrowman was a human wand for The Atrix. A singer and guitar magician, he was committed to poetry and the stage. He moved to Copenhagen in the 1990s and died there in 1998. One of his three daughters, Ieske Poppers, writes lovingly of him in the CD booklet: “I am often overcome thinking of how deeply he felt and how raw and powerful his words were and still are.”

Like Friel, he grew up around Ferndale in Finglas/Glasnevin North. They were lifelong friends: Tom Sawyer and Huckleberry Finn. “We lived on the edge of the country,” says Friel. “The Ballymun flats hadn’t been built. Cedarwood and Willow Park were only starting. We used to go over the wall. Into the fields. To climb trees.”

“The Atrix were a fully formed band with their own unique sound and mystique. They embraced the new wave but were very much their own thing. I remember so many great performances. They were always generous to up-and-coming bands. The late 1970s in Dublin were extraordinary. I was way too busy being a Virgin Prune but have very fond memories of The Atrix.” Their fatal flaw? “Simply: the wrong place at the wrong time.”

“The Atrix left their mark and the retrospective compilation should introduce them to a new audience. What was special was John’s poetry-style lyrics and the keyboard as primary instrument. They had lots of variation. They were literally a treasure on the wasteland.”

Versatile Dublin rappers: I'd like to thank all the smack heads on Abbey Street
10