Florence + the Machine at Electric Picnic: An incandescent finale

Review: The festival’s closing set leaves the audience stirred and gasping for more 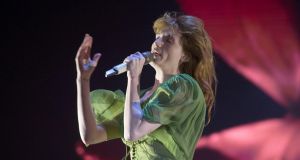 Electric Picnic 2019: everything is eclipsed by Florence Welch’s soaring vocals as she blazes through What Kind of Man and Shake It Out. Photograph: Dave Meehan

Main stage
★★★★☆
Florence Welch is celebrating 10 years as a flame-haired pop star. She marks the anniversary with an incandescent Electric Picnic closing set containing something for everyone – even Game of Thrones fans mourning the end of their favourite show.

Welch materialises barefoot wearing a billowing skirt suggestive of a yoga teacher tired of playing it safe with her fashion choices. She sways and pirouettes, a willow in the teeth of a gale.

Her most striking attribute is her oak-hewn voice. It booms out over a Stradbally tired but happy after three days of festivalgoing.

There are a lot of hits to get through. She delivers her biggest, Dog Days Are Over, early. Welch bounces on the spot, waving her arms. At one point she appears set to levitate over the crowd. She also takes a moment to urge everyone to put away their phones and then delivers a short lecture on mindfulness (which briefly threatens to become quite a long lecture on mindfulness).

Having reeled in the years with that smash, we set sail for Westeros. As the wind gusts and the night draws in, she tiptoes through the Game of Thrones anthem Jenny of Oldstones, dedicated “to Arya Stark”.

That widescreen dirge was a highlight of the ghastly finale season of the bums’n’broadswords saga. Welch, who performed it on the official soundtrack, re-creates the song’s slightly hammy majesty. It’s essentially Frodo Baggins’s idea of a power ballad. Florence imbues it with hard-won gravitas.

She pauses to warn against the evils of toxic masculinity and those who seek to advance themselves by sowing division. That’s by way of introducing Patricia, which she dedicates to Patti Smith. “Paddy who?” says the bucket-hat-wearing man next to me.

But everything is eclipsed by her soaring vocals as she blazes through What Kind of Man and Shake It Out. Shake it she does – leaving the audience stirred and gasping for more.