Stimming x Lambert: The new artists of the week

Plus songs you have to hear from Janelle Monáe and Kojaque 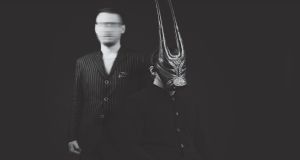 What: An ambient electronic collaborative album.
Where: Berlin.
Why: Separately, Stimming and Lambert have cultivated their own audiences in the narrow fields of the ambient electronic and neo-classical music world. Stimming is known as a composer who creates music like a minimal techno dance DJ while Lambert, known as the masked neo-classical pianist, indulges in a calmer side of things.

Both artists have a classical background and operate on the fringes, while Lambert has built up an Irish following through regular shows with independent promoter Homebeat.

Their collaboration started when Lambert saw a documentary video of Stimming proclaiming “perfection is for idiots,” and recognising a musician with a similar outlook to himself, he dropped him an email. The pair were soon working in the studio improvising.

Their album Exodus, together released on March 9th, was made not in the studio but by trading ideas, samples and sketches while travelling and touring. Lambert used the wood noise of his piano to make beats, and not being a singer, used simple vocal sounds and built “choirs” from these elemental noises.

Stimming produced the album in a hotel room in Osaka, responding to the samples and piano lines Lambert sent him. The result is an album of swirling sonics that intersects contemporary classical with experimental electronics. The Germans will be in Dublin for the album’s debut performance on March 14th at the Sugar Club.

The Dublin rapper Kojaque was happy to skulk around posting tracks on Soundcloud and YouTube for a good few years building his craft, but last year he embraced a public persona and a fresh ambition. His just-released Deli Daydreams EP is conceptually about the week of a deli worker and the theme adds a gritty weight to his tunes. White Noise rages with anger and societal frustration at class divide set to some mournful strings taking in “weekly standups in the streets with Síochána” and aiming vitriol at a country “that leaves abortions to the backstreets.” Listen here

The tightrope-walking singer Janelle Monáe has spent the last few years building her successful acting career with appearances in Hidden Figures and Moonlight. Her success in her new field meant that it was easy to forget the magnetic musician on display when she appeared. For the lead single of her forthcoming Dirty Computer album and accompanying “emotion picture”, Monáe offers the closest thing to the music of her hero and mentor Prince, with a sleek funk pop jam that oozes with class and sex appeal. Listen here