Sparks still flying after all these years 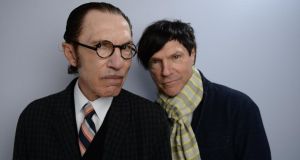 At 8am, from his back patio at home somewhere in Los Angeles, Ron Mael admits he is feeling the pressure. Yes, he has more time on his hands, but for all the wrong reasons. Self-isolation due to Covid-19 restrictions provides, he says, “the downtime that nobody wanted, expected, or what anyone hoped for”.

It gets worse. Ron admits he isn’t the kind of person that thrives in semi-isolation. “I kinda hate it, to be honest, because I need outside stimulation to be motivated to isolate myself to work; I enjoy going out and getting a coffee, sitting somewhere among other people. I really miss all of that, because it’s almost like a bribe for me to get back to work. If I don’t have that I feel stifled.”

There are always, of course, things to talk about, and despite Ron’s performative presence of poker-faced inflexibility he comes across as a warm-hearted, expressive sort. Most improbably, the primary songwriter of Sparks is 74 years of age and has been a core member (in parallel with his 71-year-old younger brother, Russell) since the early 1970s.

There is surely not a pop duo of their vintage still releasing durable, endearing music. A new album, A Steady Drip, Drip, Drip, adds to their catalogue yet another collection of watertight pop songs that manage the feat of sounding just how you want Sparks to sound while deviating ever so slightly from the familiar. They are still a much-admired going concern, I suggest, because their perennial mantra of “innovate or die” has been applied so sensibly across the decades.

“We’ve always tried to do that, and we still feel it’s important to never just coast along. When we started all those years ago, music meant something quite different from what it can now mean to many people. There are so many distractions for your attention in these times, so many other ways to be entertained, so what you do has to be strong. You have to fight through all of that. It’s something that motivates us to do better, if not different as much as possible, without losing sight of what myself and Russell do.”

And yet with each work comes an extra level of what seems to be effortless quality. The trick, of course, is in making the results of the hard work that goes into creating a song seem easy.

“Obviously, that is the desired effect,” Ron allows, “but if anything – not that one wants to reveal what goes on behind the curtain – songwriting has got more difficult as time has passed.

“I have a huge interest in sports, and I study the way athletes operate throughout their careers. It’s almost as if the most successful people don’t put too much effort into being so brilliant at what they do, that they’re just doing extraordinary things. The truth, however, is they’re putting more and more effort into maintaining their levels of excellence.

“I take lessons from this, in that despite the laborious work that has gone into such achievements, the end result always seems to have arrived by being scooped out of air.”

Whatever about the evolving nature of the work, from the very start Sparks have been a singular proposition. Formed in their native LA, their overtly theatrical stage presence arrived at time, recalls Ron, when the majority of American music lovers preferred Little Feat and Edgar Winter over a group with a bouncy rabbit of a falsetto lead singer and a static, hard-staring keyboard player. Los Angeles club gigs in the early 1970s, he says wryly, would be sparsely attended.

Things changed dramatically in 1973 when a short tour of the UK (which included a residency at London’s Marquee Club) brought them to the attention of Island Records. Within a year, the now London-based brothers released their breakthrough (third) album, Kimono My House, and accompanying hit single, This Town Ain’t Big Enough for Both of Us.

The reaction to their music and live shows was “of the kind we had always dreamed about. It was bizarre that we were playing the same songs in the UK venues as we were in the US, but it was a 180-degree turn from what we were experiencing.”

What did the UK hear that the US didn’t? The brothers’ love of British music helped, he offers.

“When we were growing up, Russell and I were into The Who, The Move, The Kinks, early Pink Floyd, really good tight pop bands. In the US, many people thought what we were doing was frothy, silly, just not serious enough. The kind of pop role-playing we were aiming for was out of place in American pop culture. In England at that time, though, there was Bowie and glam, so what we were doing didn’t seem at all weird to a British or European audience.”

That was way back then. More than 45 years later, and only slightly weather-beaten, Sparks remain as delightfully oddball as ever. There is more to come, too.

Out of the traps sometime this year is the movie musical, Annette (the English-language debut by director Leos Carax), which co-stars Adam Driver and Marion Cotillard. Over eight years in various forms of development (at points along the way Rihanna, Rooney Mara and Michelle Williams were cast; production was also stalled due to Driver’s filming commitments to the Star Wars movies), the “95 per cent song-based” film, says Ron with noticeable relief, “is completed”.

Also waiting in the wings is a feature documentary on the Mael brothers. Directed by Edgar Wright (Hot Fuzz, Baby Driver), there is a three-hour cut that will “probably have to be edited down to two if it’s going to go into theatres”. With Covid-19 still lingering in the air as much as taking over the narrative, he admits: “I suppose we’ll just have to wait and see.”

It’s a far cry from the brothers’ early days in Los Angeles. They never had a plan, Ron says. When he and Russell attended UCLA in the mid-1960s, they sent a batch of demo recordings to many musicians, record labels and producers. The only person who responded was songwriter/musician Todd Rundgren, who subsequently produced their self-titled debut album.

“We were so overjoyed and said at the time that if this had been the only album we released then we would have been very happy. We know we’re lucky to be in the position to make pop music we like and that in its own way is still current, and also to work on various musical projects that require other skills. Many people lucky enough to have a long career in music aren’t always given the opportunity to expand and grow.”

At this, we leave Ron Mael to ponder on further weeks of self-isolation, and to come to terms with whatever the new social patterns are going to be. “Right now,” he says, “there’s a certain level of absurdity within us as to where we presently are. I suppose we try to pretend that it’s normal.”

A Steady Drip, Drip, Drip is released (via BMG) on May 15th. Annette and the Sparks documentary will be released later this year

“When Sparks first started as a band we really wanted to be like the Who, in that each member would be their own type of performer, where it felt natural for them to do what they felt like doing rather than copying someone else or doing something on stage they weren’t genuinely feeling. For a keyboard player, and one that looks like me, it was hard to figure out what to do when performing. I didn’t want to leap around my keyboards like Rick Wakeman – I’m not really a leap around kind of person – so there had to be some other way.

“I gravitated towards the stoicism and stillness of the Who’s bass player John Entwistle, except I was sitting down, which made the immobility even more pronounced. I had always been a huge fan of people such as Buster Keaton, as well as silent movies and how subtle facial movements could be utilised in various expressive ways. Plus, shows like Top of the Pops used camera close-ups, and that was fortuitous for us because what I was doing – or not doing – wasn’t your stereotypical rock/pop star thing.

“I have to say the look, or the style, attracted more immediate attention than I had ever expected.”