How are composers affected by lockdowns, wars and revolutions?

From Stravinsky to Schoenberg, composers differed in their treatment of global events in the 20th century 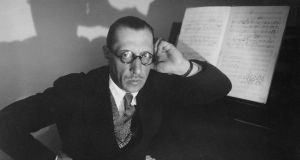 How are composers affected by the experience of lockdowns, pestilence, wars or revolutions? It all depends.

At the end of the first World War, Igor Stravinsky was living in exile in Switzerland. It was nearly five years since the scandalous premiere of his The Rite of Spring and his name was being taken around the world, literally, by Serge Diaghilev’s Ballets Russes, through Europe and America, north and south, though never actually in Russia itself.

At the beginning of 1918 the Ballets Russes, which had also given the premieres of Stravinsky’s earlier ballets, The Firebird and Petrushka, found itself in Lisbon without any upcoming engagements. The company’s lack of work was a problem for Stravinsky, too, since without performances his royalties would dry up.

His solution was to go small and write a piece that could easily be taken on tour. With the Swiss writer CF Ramuz he created The Soldier’s Tale, for a small instrumental ensemble with dancers and a non-singing cast of three. The music was additionally designed to be viable as a concert work and the first staged performance, in Lausanne at the end of September 1918, was well received.

But the planned tour fell apart. The Spanish flu epidemic brought down the troupe that had been brought together and Stravinsky had to wait a full five years to see another production.

Unlike Stravinsky, Arnold Schoenberg was actually mobilised during the war. He served in the Austrian army, though he was discharged from duty at the front because of asthma.

His wartime service yielded an amusing exchange with a superior. A music-loving colonel, it is said, had heard that there was an Arnold Schoenberg under his command, and wondered if it might be the notorious composer of the difficult music he so disliked.

Schoenberg was summoned before the colonel to find out if he was that Arnold Schoenberg. “Someone had to be,” said Schoenberg, “and nobody else wanted to. So I took it on myself.”

But Schoenberg’s Great War-inspired work, the searing A Survivor from Warsaw, was sparked not by the war he served in, but by accounts - some of them first-hand - he received when living in Los Angeles, about the Warsaw Ghetto uprising of 1943. The work’s first performance was given by the Albuquerque Civic Symphony Orchestra in November 1948, when the audience’s enthusiastic reception prompted an immediate full second performance.

Schoenberg’s father had died in the flu epidemic of 1890 and the composer himself suffered many bouts of flu, twice a year for a period of 12 or 15 years, he said, and he was also affected in 1918. But it was not until the String Trio he composed in 1946 in the wake of an incident to do with severe chest pain that his health was directly represented in his music.

A doctor gave him an injection of Dilaudid (the opioid hydromorphone) directly into his heart and, Schoenberg explained, “after 10 minutes I lost consciousness, had no heart beat or pulse and stopped breathing”. Thomas Mann later said the composer had told him that he had “represented his illness and medical treatment in the music, including even the male nurses and all the other oddities of American hospitals”.

Schoenberg himself reported that when he regained consciousness “a man with coal-black hair was bending over me and making every effort to feed me something . . . It was Gene, the male nurse. An enormous person, a former boxer, who could pick me up and put me down again like a sofa cushion.”

Among the most famous pieces of the 20th century with war associations are Dmitri Shostakovich’s Leningrad Symphony and Olivier Messiaen’s mystical Quartet for the End of Time. Both were completed in 1941, most of the symphony during the Siege of Leningrad, the quartet in a prisoner of war camp in Silesia, where it also had its first performance. The fact that the symphony’s first movement was finished before the siege had started, or that the quartet includes material composed before Messiaen’s captivity, has not diminished either work’s public appeal.

Even Stravinsky, who made the controversial statement that “Expression has never been an inherent property of music,” said that his wartime Symphony in Three Movements “was written under the impression of world events”. He carefully excluded the possibility that the piece expressed “feelings about them” though he revealed that the opening movement had been sparked by a film of “scorched-earth tactics in China”.

As a composer of ballets split into sections with highly descriptive titles, Stravinsky would have been keenly aware of the power of a title to influence listeners’ responses. Think also of Krzysztof Penderecki’s Threnody for the Victims of Hiroshima, which was originally titled just Threnody. Or Aaron Copland’s Appalachian Spring, a ballet for Martha Graham, which was given its title by Graham only after the music was completed.

Copland recalled having people come up to him and saying: “‘When I listen to that ballet of yours, I can just feel spring and see the Appalachians.’ But when I wrote the music, I had no idea what Martha was going to call it! Even after people learn that I didn’t know the ballet title when I wrote the music, they still tell me they see the Appalachians and feel spring. Well, I’m willing, if they are!”

After all, many are the composers who have recycled music from one opera to another, or from sacred texts to secular ones, and the other way around.

It wouldn’t be surprising if someone produced a Covid-19 related work. But in the end, it may all be in the name.