When will concerts be on again? When people feel safe to go

With most summer events cancelled, the picture for autumn is looking a lot less clear 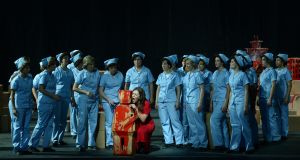 Germany’s Schleswig-Holstein Music Festival and the Bayreuth Festival (above), both scheduled through July and August, and Oktoberfest, due to begin in late September, have been cancelled. Photograph: Christof Stache/AFP/Getty Images

It’s ruin out there. The long list of cancellations now extends well beyond the official restrictions that are currently in force until Tuesday May 5th. The Great Music in Irish Houses in June and the West Cork Chamber Music Festival in June and July are gone. And a string of promotions by the National Concert Hall and the RTÉ National Symphony Orchestra in Dublin, and the Ulster Orchestra in Belfast, have all fallen victim to Covid-19.

That unfortunate list is likely to get longer for quite a while to come. August’s Edinburgh International Festival has been cancelled, though, formally, not yet the BBC Proms, due to run from July to September.

Details of the Proms, which would normally have been announced by now, have been held back until the end of May. The BBC says: “We are still hoping that the Proms will be part of the summer this year, although that will involve adapting and changing the festival we originally planned.”

The Oktoberfest in Munich, which attracts about six million visitors, two million of them from outside Germany, was cancelled last week in a joint press conference with Bavaria’s minister-president Markus Söder and the mayor of Munich, Dieter Reiter. “It hurts, it’s such a pity,” they said. “We have agreed that the risk is simply too high.” And it seems unlikely that many of the 2019-20 music or opera seasons around the world will be resumed.

The website of the Lucerne Festival in Switzerland carries a message from last week saying that, “on the basis of what is known at present”, the summer festival “will be able to take place as planned” in August and September. But Lucerne, which is one of the world’s largest annual gathering places for internationally touring orchestras, is going to be affected by some of those other cancellations. With the likes of Edinburgh and Schleswig-Holstein out of the picture, there will be a domino effect as the lost dates make tours unviable – and not just for orchestras.

Here in Ireland, the Government has banned public gatherings of more than 5,000 until September 1st. Obviously there are no classical music concerts or events that fall under that description. But what can be expected in the National Concert Hall, or any of the country’s other music venues or theatres, between September to December is far from clear.

This time last year, the National Concert Hall had already announced its new season. Now its publicity is all about cancellations. Not a word about the next season’s offerings has been uttered.

The NCH, which has often presented international orchestras at the end of August, is being caught up in the domino effect and, quite apart from that, it doesn’t know, any more than any other planners or curators, when the Government will actually be in a position to allow normal activity to resume.

To maintain social distancing, the audience would have to assemble in a specific order

The reason for that is clear. The Government itself does not know that yet. And when the Government does restore the freedom to assemble in large enough numbers to allow something approaching normal concert and theatrical life to resume, it’s completely unknowable what anyone’s appetite is going to be for scrunching through a row of people to find the right seat, or mingling with a large crowd in a foyer or bar.

I’ve heard that some venues have calculated how they might fare if audiences were allowed to gather under current social distancing rules, with one scenario showing that just one in eight of the normally available seats could be filled.

The practical problems go much further than that. To maintain social distancing, the audience would have to assemble in a specific order. Seats in the centres of rows would have to be taken first, and, presumably, rows nearest the entrance would have to be filled last. And the opposite on the way out. Intervals would be a nightmare. And wouldn’t it all go to pot if there was an emergency? I just can’t see it working.

The Minister for Health, Simon Harris, has already stated that “the week beginning May 5th is not going to be a Big Bang moment in terms of the lifting of restrictions”. And the longer the restrictions are in force, the less likely it is that their lifting will be a decision based purely on the consideration of the health of the nation.

In the end, it will be a political decision that will have to balance considerations of health against broader issues of sustainability and a realistic prospect of compliance.

It is surely relevant that Germany, with less than half the confirmed Covid-19 cases per million of population that Ireland has, and only a third of the deaths per million, is also further down the road than we are in the cancellation of major festivals.