Zara Devlin, locked-down star of Sing Street, is to perform in its online Covid-19 fundraiser 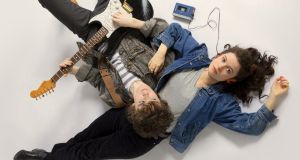 Zara Devlin makes her Broadway debut on Thursday. But it’s one with a difference. The Irish actor will be appearing from her bedroom in rural Kildress, between Omagh and Cookstown, in Co Tyrone.

The 24-year-old, who plays Raphina, one of the leads in the Broadway production of Sing Street, is among the stars of the Covid-delayed stage musical who will sing songs from the show from their homes for a charity livestream on Thursday evening.

Based on John Carney’s Golden Globe-nominated film set in Dublin in 1982, where Conor, a teenager, turns to music to escape troubles at home and impress the mysterious Raphina, the stage adaptation premiered to strong reviews at the off-Broadway New York Theatre Workshop in December; it was due to transfer to the Lyceum Theatre to open on April 19th. The show, produced by Barbara Broccoli, was in technical rehearsals when Broadway had to shut because of coronavirus. The show is on hold pending new dates.

I didn’t think in my wildest dreams that Broadway would ever happen. I thought if you couldn’t tap-dance you’ll never be on Broadway

In the meantime the young cast of the show, who had scattered around the world after the shutdown, chatted and recorded scenes and songs via their mobile phones and laptops from their homes in Ireland, Britain and, mostly, the United States. They will perform “together” on Thursday in Sing Street Grounded: At Home with the Broadway Cast.

Back with her parents, Michelle and Michael Devlin, and her younger siblings, Shane and Emily, Zara laughs about recording her numbers in the bedroom while they were “dropping saucepans and banging doors downstairs”.

She had been living in New York since October, for the off-Broadway run – the city felt like home when she left, she says. They had only just started their technical rehearsals – when the stage, sound, light and other non-acting aspects of the production are worked on – the day Broadway closed.

“I think we had about an hour’s tech. We had just walked into the theatre that day, and we had to leave at five o’clock. It was hard to take in at the time, but when you see how New York is now, how the world is... I was lucky to get home.”

Devlin, who went to the Lir Academy in Dublin, has performed at the Gate, at the Abbey and in Rough Magic’s staging of Hecuba, the Marina Carr play, in last year’s Dublin Theatre Festival; she was nominated as best supporting actress in last year’s Irish Times Irish Theatre Awards for her part in Carr’s play On Raftery’s Hill, at the Abbey. But getting the part in New York was a big break. “I didn’t think in my wildest dreams that Broadway would ever happen. I thought if you couldn’t tap-dance you’ll never be on Broadway.”

All proceeds from the livestream go to Broadway Cares and to the Mayor’s Fund to Advance New York City, for the fight against coronavirus.

Sing Street Grounded: At Home with the Broadway Cast will be livestreamed at 6.30pm Eastern time in the US (11.30pm in Ireland) on Facebook. Donations can be made using the donate button during the livestream, which will be available on demand until Monday, May 4th

Flying columns: The elite guard of the old IRA
10

Live entertainment from your couch: What’s on this week
Real news has value SUBSCRIBE