‘She was on a roll’: The Cranberries on the last days of Dolores O’Riordan 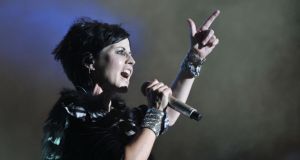 The last time the Cranberries guitarist Noel Hogan saw Dolores O’Riordan was in the Limerick hotel where we are now standing, in November 2017. He had agreed to do an interview with a Chinese journalist. The band are huge in China, apparently, and had a run of arena gigs booked there. O’Riordan was living in New York and she wanted distraction; she decided, in a typically whimsical move, to come to meet the journalist, too, taking the direct flight to Shannon Airport. She was in good spirits, although ongoing back problems – a slipped disc, from picking up a guitar – had led to a cancelled tour that summer.

Christmas came and went, but The Cranberries were still recording. O’Riordan would send Hogan vocals by email. On January 14th she emailed him new songs: she had flown to London to mix an album with her side project D.A.R.K.At 1.12am on January 15th, calling from the Park Lane Hilton, she left a friend an excited voicemail in which she said a new recording was sounding “f***ing terribly good”. At 2am she spoke to her mother. Later that night she died.

I meet the band four days before an inquest ruled that the 46-year-old had drowned accidentally in the bath, with high levels of alcohol in her blood. Hogan looks around the lobby and says it is hard to believe that the last time he saw her it was somewhere so mundane.

When she sang I wondered how and why she wasn’t already in a band. I didn’t want to question it. We were lucky enough that she had come into this room

On the top floor, with its views out over the River Shannon, three Cranberries bear the mark of men still coming to terms with bereavement. Like many bands who lose a member, they threw themselves into activity. Their new album was nearly finished, so they completed it; April and May passed by in a blur. The strangest thing, they say, was that working in the studio was not all that different. The three of them would always record by day and O’Riordan would come in to sing at night, alone, with their producer Stephen Street.

“We’d pass each other in the corridor,” says Mike Hogan, Noel’s bassist brother, who was only 20 when the band achieved international fame. “Dolores would say: ‘You know that thing you recorded?’ I’d say: ‘You mean the thing that took me five hours to get right?’ She’d say: ‘Yeah. It’s not working!’ This time around there were nights when we were waiting, looking for her to come in the door.”

“Waiting for her to come in, like,” his brother echoes. “I found that, at night, I was so exhausted. Not physically but mentally; those months from when Dolores passed away were intense.”

The pair, along with Fergal Lawler, the band’s drummer, are a close-knit circle, managed by one of O’Riordan’s five brothers. She grew up 15km outside Limerick, in Ballybricken, but they are from the city and met when breakdancing in their teens, in the mid-1980s. They first saw O’Riordan when she was 19 and tried out for their band. She was painfully shy and quiet, they all agree, but “when she sang”, Noel says, “I wondered how and why she wasn’t already in a band. I didn’t want to question it. We were lucky enough that she had come into this room.”

While the four of them shared a love for The Smiths and The Cure, O’Riordan’s vocal style stood alone: it was described by a Melody Maker journalist in 1991 as “the voice of a saint trapped in a glass harp”. She learned her yodel from her dad, a country-music fan, and there were church influences, too. The music mag went to her family home to meet the band and painted an intriguing, kitsch picture: a Jesus clock and holy water from Lourdes, with Christmas turkeys being bred in a shed in the dark. She adored her father, a farm labourer who was injured in a motorbike accident that left him unable to work; she is buried alongside him in St Ailbe’s Church in Ballybricken.

O’Riordan recalled an idyllic childhood – warm beds, hearty dinners, a fair dose of spirituality – but, in 2013, she told the Irish Independent that between the ages of eight and 12 she had been sexually abused by a family friend. Throughout her life she would flip, in interviews, between poetic positivity and confession.

The heady combination of raw, emotional lyrics and evocative Irish flavours quickly caught the attention of the wider world: the very first song O’Riordan wrote for the band was Linger, and it remains their biggest hit. Although their debut album, Everybody Else Is Doing It, So Why Can’t We?, tanked the first time around, after two US tours Linger was put on heavy rotation by MTV, and upon its rerelease the album went to No 1 in Ireland and the UK. By 1995 it had sold five million copies in the United States. It is being reissued in a box set next month.

The US was always The Cranberries’ second home. O’Riordan wrote an international protest song in Zombie, her response to the IRA bombing that killed two children, Jonathan Ball and Tim Parry, in Warrington, in northern England, in 1993. Its lyric was so powerfully abstract that Parry’s father, Colin, only realised, on O’Riordan’s death, what had inspired it. Their label was wary of the track’s politics, but the band were not.

That first album was all about relationships that she’d had through her teenage years. You could open yourself to ridicule – but she didn’t care

“In the 30 years with Dolores, what she wanted to do lyrically was her thing; we never interfered,” Noel says. “That first album was all about relationships that she’d had through her teenage years, and to stand there and spurt that out to everyone, you could open yourself to ridicule – but she didn’t care. That remained with her always. She wrote what she felt was right.”

When fame hit they were all about 20. It was always tougher for O’Riordan, Mike says, being on the front of the local paper, buying fish fingers at the supermarket. She broke her leg badly on a group ski trip during the recording of their second album – she wrote songs from her hospital bed – and, during her protracted convalescence, she began to struggle with depression and anorexia. By 1999 she was listed as the fifth-richest woman in Britain or Ireland, but fame was wrecking her nervous system. By 2003 the band were “burnt out”: they saw very little of each other for six years, with O’Riordan living in Canada with her husband, Don Burton, and their three young children. There was a reunion in 2009, but you get the sense of a band kept on their toes by an unpredictable leader.

“She would say we needed some time off and a week later she would be bored,” Noel says. “Her emails were like text messages. Fifteen of them, but they’re all, like, two lines, at two o’clock in the morning.”

“Sometimes, when you did want time off, you’d be dreading seeing her ringing,” his brother says with a smile.

After her split from Burton O’Riordan spent a period living in hotels in New York. In 2014 she had a manic, paranoid episode on a flight from JFK to Shannon and assaulted the cabin crew, reminding them who she was. Shortly afterwards she invited the journalist Barry Egan into her home and told him how much trouble she was in; it was a cry for help from someone who had grown up in the public eye and who possibly struggled in periods of relative obscurity. “My life has no control,” she said. Shortly afterwards she was diagnosed with bipolar disorder. How much did the band know about her problems in her later years?

“It was only the last few years that she started talking about psychological problems, because she didn’t know herself,” Lawler says. “She saw a few different therapists and realised what she had, and she started getting treatment for it.”

“She was a lot more herself,” Noel says. “Especially last year, when we were rehearsing: you wouldn’t even know, because they had found the right cocktail of whatever it was she needed to be on. There wasn’t even a case of having to work around it. The hardest thing was her back, because playing live she could not move as freely as she used to.” The new album gave her something to focus on, he says. “She was really psyched about getting back out and really looking forward to China, because that was a big tour for us.

“Dolores had an awful lot going on, and she was on a roll of being able to write,” he continues. “Lyrically, the new album is very strong. She always said she found it hard to write songs when she was happy. She always said, put a bit of misery in her life and it was easier.

“We will do this album and then that will be it,” he adds. “There is no need to continue.”

The band step out on to the balcony. Noel stood out here with O’Riordan the last time he saw her. This is new for them: no frontwoman, no idea how to stand, to pose, without their focal point.

“With Dolores, doing pictures was so easy, because you knew exactly what to do,” he says. “Just all get behind her.” – Guardian

The box set of Everyone Else Is Doing It, So Why Can’t We? is released on October 19th on UMC. The Cranberries’ final album, In the End, will be released next year