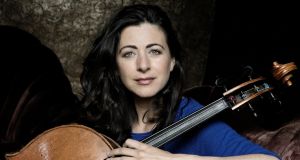 There was serious competition for the Westport Chamber Music Festival last weekend. The muscle cars of Cannonball Ireland were on their way, and as I wound my way up the long drive to Westport House on Friday evening I could hear the noise of their high-revving engines. It was as if a swarm of enraged, supercharged insects was about to descend on the town.

Happily, the sounds of the cars did not impact significantly on the altogether quieter world of the music-making in Westport House. Venezuelan violinist Giovanni Guzzo and Irish pianist Michael McHale opened the festival with a light-touch account of Grieg’s Violin Sonata in C minor, Op 45. The transparency of the playing worked strongly in the music’s favour, and the focus was on lyricism rather than drama.   Irish tenor Robin Tritschler was partnered by Latvian pianist Diane Ketler in two rarely heard 20th-century French song cycles. Milhaud’s Six chants populaires hébraïques, first performed in 1925, includes in its dedicatees fellow composer Arthur Honegger, whose Petit cours de morale of 1941 is one of the shortest song-cycles ever written: five songs, portraits of women, each just a page long and taking less than five minutes to perform.

Tritschler delivered both with an enviable artlessness that allowed him to merge words and vocal line as if they had always been together, intertwined but distinct. The gravity of Milhaud’s exploration of his Jewish heritage and the Poulenc-like wit of the Honegger responded equally well to the sensitivity of his approach, and Ketler at the piano was a model of supportive tact.

The evening ended with a work of an entirely different cast, Mozart’s great String Quintet in G minor performed by the Heath Quartet with Norwegian viola player Eivind Ringstad. The five players worked in a way that highlighted both independence and co-operation. Individuality seemed to win out and, to make an extreme analogy, it was like one of those notorious opera ensembles where cast changes create a line-up in which the singers end up performing in different languages. Everything is together and not together at the same time. This Mozart performance sounded better as an expression of the five individual parts than as a balanced presentation of the whole. Fascinating.

The Heath Quartet gave the festival’s other Westport House concert: a Sunday morning exploration of three chorale preludes by Bach, and Benjamin Britten’s Second String Quartet, written in 1945 to mark the 250th anniversary of the death of Purcell and first performed in London on the actual day of the anniversary.

The Heath’s view of both Bach and Britten was very much a perspective from our own time. The strongly projected chorale melodies you would expect of Bach on the organ was foregone in favour of a more democratically concerned string quartet style. And the binding force of tonality in the Britten was weakened through an approach that seemed little concerned with shaping the music from a harmonic perspective.

The Schumann was riveting from start to finish, Tritschler and McHale drawing the ear in with a performance of revealing intimacy

Killian White (cello) and Gary Beecher (piano) gave Saturday’s Next Generation Artist Concert in the Westport Town Hall Theatre. White is a player with an attractive, natural ease to his delivery. Yes, he sometimes sounds stressed, but that seems more a matter of technique than of musical decision – he’s still in his teens. And Beecher is an adaptable pianist. The programme of sonatas by Debussy and Beethoven and Schumann’s Adagio and Allegro seemed well chosen to show the players’ strengths.

Tritschler was involved in two of Saturday’s concerts at the theatre, firstly in the Yeats settings of American composer Lowell Liebermann’s A poet to his beloved (with flautist William Dowdall, pianist Hugh Tinney and the Heath Quartet) and also in a late-night performance of Schumann’s Dichterliebe (with Michael McHale).

I found myself feeling hot and cold about the finely crafted, beautifully sung Liebermann, admiring its skill but resisting some of its off-the-shelf background patterns. The Schumann was riveting from start to finish, Tritschler and McHale drawing the ear in with a performance of revealing intimacy.

Cellist Natalie Clein took part in a thrusting account of Shostakovich’s Cello Sonata with Ketler, and was joined by Guzzo, Ringstad and McHale for a finely spun, exquisitely balanced account of Fauré’s Piano Quartet in G minor, Op 45. The filigree of McHale’s deft fingerwork provided an ever-adapting backdrop which at times enabled the string players to make their effect without even appearing to have to raise their voices. Magical.

McHale was involved also in the highlight of the final concert in Holy Trinity Church. He partnered Ringstad’s viola in Schubert’s Arpeggione Sonata, named after the now obsolete instrument for which it was written and which blended elements of the guitar and the cello. The nimble character of the playing seemed ideally matched to the music.

The Westport festival uses the same small Steinway grand piano that was to be heard in St John’s Priory during Kilkenny Arts Festival. Different venues and different players produce different results. None of the issues of imbalance and tonal stress that were in evidence in Kilkenny surfaced here. Different repertoire comes into play, too. Unlike Kilkenny, there was no heavy-duty Brahms to be dealt with.