Rachid Taha obituary: A pioneer who shook up the global music scene

Singer will be remembered for fiery fusion of Algerian styles and rock, techno and punk 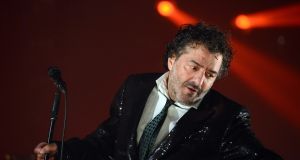 Singer Rachid Taha has died of a heart attack at the age of 59. Photograph: Thomas Bregardis/AFP/Getty Images

Rachid Taha, who has died of a heart attack aged 59, shook up the global music scene with his inventive and fiery fusion of Algerian styles and rock, techno and punk. An engagingly bohemian-looking figure, influenced by the Clash as well as by chaabi and rai music, he became a bestselling artist across the Arab-speaking world and will be remembered for Rock el Casbah, his 2004 treatment of the Clash song Rock the Casbah and for his international dance hit Ya Rayah, as well as for his energy, angry political stance and wit.

He appeared alongside Damon Albarn at many Africa Express events, and Albarn described him as “a beautiful person, very naughty, impish and with bright eyes and generous with his time. I just loved him and always enjoyed performing with him.”

Born in Sig, near Oran, on Algeria’s north-west coast, Taha grew up listening to Algerian music. When he was 10 his father moved to France looking for work and, according to Taha, “ended up in a textile factory, like a modern slave”. The family followed him to France, where at the age of 17 Taha worked in a central heating plant outside Lyon, which he hated. By night he was a club DJ for the local north African community, playing Arabic music along with funk, rap and salsa, and started writing poetry and political songs, also influenced, he said, by the Clash and Linton Kwesi Johnson.

In Lyon he started his first band, Carte de Séjour (Residence Permit), who sang Arabic and punk-influenced songs that commented on “working conditions and the way that immigrants are treated”. They achieved national notoriety with their version of the patriotic Douce France (Sweet France), originally recorded by Charles Trenet in the 1940s. They changed none of the lyrics but it was performed with a bitter irony that infuriated many listeners, and was banned from radio. Carte de Séjour were never a commercial success and Taha was forced to do a series of other jobs, including painting houses, washing up in a restaurant and selling encyclopedias door to door.

In 1989 he moved to Paris to launch a solo career. His 1991 album Barbès was produced by Don Was, who had worked with the Rolling Stones, but it was not a success. He did better when he teamed up once again with the British producer Steve Hillage, who had produced an album for Carte de Séjour, Rhorhomanie (1984), after deciding: “I want to be involved in this. This is the business.” A former member of those psychedelic rockers and hippy heroes Gong, Hillage would go on to produce the majority of Taha’s solo albums, starting with Rachid Taha (1993), which included north African and European influences and included the anti-racism anthem Voilà Voilà, popular with English DJs.

Taha became a star, pioneering a new north African rock fusion style while also reviving and reworking classic Algerian songs. His 1995 album Olé Olé included songs co-written with Hillage, and in 1999 he released Diwan, a selection of cover songs from Algeria, Morocco and Egypt, with backing provided by traditional instruments such as the oud but with Hillage adding guitar and programming. It included his treatment of Ya Rayah, one of the first Arabic songs to become popular with European club DJs, and a top seller from Turkey to Colombia.

In September 1998 he appeared alongside the rai stars Khaled and Faudel for the rai spectacular 1, 2, 3 Soleils, in which they were backed by a full orchestra flown in from Egypt before a capacity audience at the Bercy Stadium in Paris. It was, said Rachid, the first north African concert to be given serious coverage in the French media. The event led to a live double album, again produced by Hillage. But despite the success of the project, Taha insisted that his main influence was not rai but the popular Algerian style chaabi, which he said was closely linked to blues and rock. “This isn’t rai,” he told me. “I’m more of a Rai Cooder – and I mix my influences, like Asian Dub Foundation.”

Taha’s success continued with the 2001 album Made in Medina, a chaabi-punk-pop fusion that included musicians from New Orleans and Egypt, and the classic 2004 set Tékitoi, which included Rock el Casbah, with Arabic influences mixed in with the familiar guitar chords of the Clash classic, and a collaboration with Brian Eno. Some of his later albums received more mixed reviews but he returned to form in 2013 with Zoom. Produced by Justin Adams, it included guitar work from Mick Jones of the Clash and a North African treatment of Elvis Presley’s Now or Never.

Taha was best experienced live. On stage he had the charisma of a classic rock’n’roll rebel, a blend of Gene Vincent and Joe Strummer. He was at his peak at the Royal Festival Hall in 2002, where he came on dressed in black, a thin, scruffy figure with tousled hair who sang hunched over the microphone and then fell to his knees. He performed songs from Diwan, “to pay homage to my culture”, and then discussed David Bowie and T Rex. When he started talking about politics his approach was equally inclusive. “Black and white – the same,” he announced. “Arabs and Jews – the same.”

Taha’s musical approach and views made him a perfect member of Africa Express, the freewheeling project co-founded by Albarn that encourages African and western musicians to collaborate. He was there at the first, now legendary, Africa Express show, an unannounced five-hour spectacular at the Park Stage at the 2007 Glastonbury festival. It was a wet, muddy evening but Taha was in fiery form, joining a cast that included Baaba Maal, K’naan and of course Albarn. He went on to play at many other Africa Express events and Albarn said that Taha “was at the heart of what we did”.

In 2016 Taha received a Victoire de la Musique lifetime achievement award – the French equivalent of a Grammy or Brit award. For several years he had suffered from a rare form of muscular dystrophy but he continued to work. He had finished recording a new album earlier this year, as yet untitled but due for release in 2019.

He is survived by Véronique Pré, his longtime partner, and by their son, Lyes.–Guardian Service

Live Aid: the day Bob Geldof dropped the F-word. But what did he say exactly?