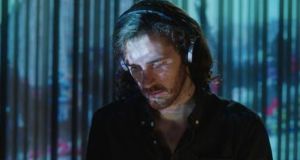 The video for Hozier’s Nina Cried Power features a host of Irish people known for their activism. Photograph: Hozier/Facebook

Several of those featured took part with Hozier in the recent Stand For Truth event, a protest against the visit by Pope Francis to Ireland.

In the video just over 20 people, including pro-choice and end direct provision activists, were filmed wearing headphones while listening to the song for the first time. In an emotional visual sequence, they are seen reacting wordlessly to the powerful anthem.

The video, made in Windmill Lane Studios in Ringsend, Dublin, was released at 6pm on Wednesday, September 12th .

The song is named for civil rights activist and soul singer Nina Simone who recorded a version of Sinnerman, which features the lyric “I cried power”.

Reviewing the song in The Irish Times, Ed Power described it as “a tree-flattening tour de force that explores broad themes of protest and liberation”.

In his own words: Hozier wrote this message to accompany the video

This song was intended as a thank you note to the spirit and legacy of protest; to the artists who imbued their work with the vigour of dissent, and a reflection on the importance of that tradition in the context of the rights, and lives, we enjoy today. My hope for this video is much the same.

Ireland has undergone a socio-cultural sea change, the results of which will benefit generations to come. We are witness to a new Ireland waking to the consciousness of itself; a kinder, more inclusive nation. This video is an attempt to acknowledge just a handful of those who have fought for this new Ireland, and whose work continues to inspire me.

Thank you to Christina Noble, for showing the limitlessness of human kindness, and its ability to achieve the seemingly impossible.

Thank you to Bernadette McAliskey and Eamon McCann, who fought for the bitterly-resisted equal right to vote, and who bore witness to atrocity and would not be silenced.

Thank you to Joe Caslin, who literally coated Dublin city itself with reflections on our capacity for compassion as a people.

Thank you to Saoirse Long, whose honesty revealed not only our own failures as a people, but laid bare the true face of what barred the way of progress for women’s reproductive rights.

Thank you to Panti Bliss, who remains a leading voice advocating for inclusion, and a standard-bearer for the new Ireland we are watching unfold.

Thank you to Victoria Chihumura for fighting tirelessly for equal opportunities in education.

Thank you to Anna Cosgrave, who provided real leadership to my generation, and brought new widespread visibility to the issue of reproductive rights.

Thank you to Simone George for her indelible spirit, and for fighting injustice in its many forms.

Thank you to Grace Dyas whose decisions in work and life give to us an example of bravery and conscience.

Thank you to Sinéad Burke for pushing tirelessly for inclusivity in her industry and beyond.

Thank you to Maria Walsh for using her platform to promote gender equality, and the right for everyone to love who they love.

Thank you to Colm O’Gorman, for his unwavering dedication to human rights and his fearless speaking of truth to power.

Thank you to Ellie Kisyombe for reminding us of the meaning of home.

Thank you to Stephen Rea for the work he does both for UNICEF, and for Ireland itself.

Thank you to Sam Blanckensee for their important work on gender recognition legislation.

Thank you to Florence Adebambo and Aaron Edo for reminding us of the bright future that awaits those who have joined us from afar, and how that future needs to be fought for.

Thank you to Blessings Moyo and Lucky Khambule for reminding us how much further we have to go, and how we must strive to do better.

Thank you to Mavis Staples, for giving to the world a timeless example of how worthwhile the raising of one’s voice is, in song and in protest.

Thank you to you all for your work, for joining us on set and allowing us to play you the song for the first time. You are all truly inspirational figures, and this video is for you.

‘You can’t but conclude, the least safe place for any of us this weather is in our homes’
3