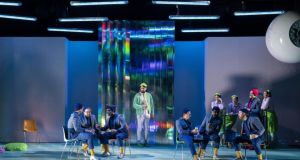 THE TALES OF HOFFMANN

O’Reilly Theatre, Dublin
★ ★ ★ ★
The three tales in Jacques Offenbach’s The Tales of Hoffmann are set up in act I, the prologue. For Irish National Opera’s new production the prologue provides the audience with just about enough time to acclimatise to Katie Davenport’s striking but initially unpromising sets and costumes. Fluorescent strip-lighting fixtures hang from the ceiling above stackable plastic chairs. There is a chrome-effect theme in the sets, but any potential for glamour is neutralised by the dullness within them. Then come the costumes, notably those of Hoffmann’s drinking companions in the bar, full of harsh clashes and uncomfortably short trousers, as though the singers have all grown 6in since the dress rehearsal. And as people they are as hard to warm to as their clothes, being more carnivorous than congenial.

Offenbach doesn’t seem to care much if we warm to his central character, either. Hoffmann is basically a loser. We actually end up siding with the other drinkers, happy to feed off the entertainment of his songs and stories, but always laughing at rather than pitying him in his multiple heartbreaks.

Tom Creed, the director, makes sure that the tenor Julian Hubbard maintains this nonheroic persona via movement, expression and unruly hair, so that he is hapless and a bit annoying. Offenbach appears to prefer that we relate more to two other characters introduced in the prologue. The first is Nicklausse, Hoffmann’s wise, loyal and protective friend, sometimes reckoned a projection of Hoffmann’s own better qualities, a trouser role performed with warmth and understated lyrical ease by the mezzo-soprano Gemma Ní Bhriain.

The second is Lindorf, Hoffmann’s rival for the affections of the singer Stella, and who will morph into each villain in turn in each of Hoffmann’s three tales. The bass John Molloy is a debonair and exquisitely judged ham in all four villainous roles, earning boos during the bows.

Davenport’s visuals, supported by the high-energy lighting design of Sinéad McKenna, suddenly and rather magically kick in with the start of act II, the first of Hoffmann’s tales. The prologue’s dreariness is at once dispelled, replaced by the gleam and flash of Spalanzani’s laboratory, here presented as the venue for a modern-day techno-product launch. The product, of course, is Olympia, the lifelike mechanical doll, updated by Davenport to a humanoid inspired by the iconic female Maschinenmensch in Fritz Lang’s 1927 film Metropolis.

Enter the soprano Claudia Boyle. She fearlessly accepts the challenge of depicting four very different roles – and singing styles – in the one opera and nails all of them. But her performance as Olympia is hard to believe. The part calls for high coloratura acrobatics in which Boyle is not only faultless but to which she also adds a robotic air of disinterest. Her mechanical gestures and reactions are priceless, no less delightful for being stock-in-trade. Then these in turn are surpassed by her modern dance moves, which include the Macarena and what I understand is called flossing.

Those initially unpromising costumes constantly grow and intrigue as the opera unfolds, particularly among the chorus, which sometimes presents a striking but organic gender fluidity. Notable smaller parts include the young Irish mezzo Carolyn Holt as the voice of Antonia’s dead mother, and the impressive baritone Brendan Collins generating some genuine empathy amid all the hilarity as Antonia’s father.

Andrew Synnott directs from the piano his own reduction (to just seven instruments) of Offenbach’s big score, maintaining the energy and shifting moods throughout.

Irish National Opera’s production is engaging throughout and full of energy and surprises, showcasing in particular the deep talents of Claudia Boyle and John Molloy.

The Tales of Hoffmann is at the Pavilion Theatre, Dún Laoghaire, on Tuesday, September 18th, then tours until October 6th, visiting Navan, Limerick, Cork, Tralee, Kilkenny, Galway, Letterkenny and Sligo