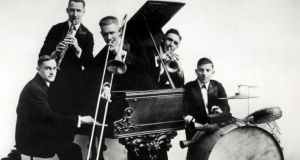 The Original Dixieland Jazz Band: despite their worldwide acclaim from 1917 until 1925 they have largely been ignored or derided in jazz history

This year marks the centenary of the issuing of the first ever jazz record. This was Victor Catalogue Number 18255 released by the Victor Talking Machine Company of New York on March 5th, 1917. It was a black shellac two-sided 78-RPM record, side one being Dixie Jass Band One Step and side two featuring Livery Stable Blues.

The Original Dixieland Jazz Band (ODJB) consisted of five white musicians from New Orleans: Nick LaRocca on cornet; Eddie Edwards on trombone; Larry Shields on clarinet; Henry Ragas on piano and Tony Sbarbaro on drums. They composed, played and recorded all the early Dixieland standards including Tiger Rag, Clarinet Marmalade, Sensation Rag, Bluin’ and the Blues as well as the two tracks on that first record.

The ODJB were the first band in the world to use the word jazz and despite the subsequent claims of Jelly Roll Morton, they were the real “inventors of jazz”. What they embodied was a magical fusion of improvised five-part counterpoint with the manic excitement of a circus band. Despite their worldwide acclaim from 1917 until 1925 they have largely been ignored or derided in jazz history. After all, they were five white men from New Orleans. They became the victims of an inverse racism, and were accused of pirating and vulgarising black music, despite the praise they received from the likes of WC Handy and Louis Armstrong. Black music and rhythm were of course fundamental to the creation of jazz but it was also a hybrid of marching band and Irish music as well as opera.

The Original Dixieland Jazz Band was in Chicago in 1916 where they were spotted by the great Jewish comedian and singer Al Jolson who arranged for them to open Reisenweber’s Cafe, a fashionable nightclub in New York. On that night, the club’s dancers were at first reluctant. But after the first hesitant couple made it to the floor it was soon jammed. An advertisement at the time said their music “Would inject new life into a mummy and keep ordinary dancers on their feet for 24 hours”.

In 1919, the little band sailed for London to bring jazz to the old world. Tragically, pianist Henry Ragas died from flu during the worldwide epidemic before the band made it to the UK. Their trombonist Eddie Edwards was also pressed into the US army, so they were replaced by J Russel Robinson on piano and Emil Christian on trombone.

The band was a sensation in London, opening and becoming the resident band at the New Hammersmith Palais de Danse and appearing at Rector’s Club and the Palladium. The late Marquess of Donegall told me that he and Edward Prince of Wales arranged for them to play at Windsor Castle for George V, who was not amused.

They returned to New York in July 1920 and continued playing and recording until they split up in 1925. They were silent for more than a decade but reformed in 1936. The band re-recorded their old standards both on their own as a band and with a swing orchestra accompaniment. Warring temperaments among the musicians, however, meant that the band broke up once more in 1937. This was their final appearance apart from a recreation in 1943 with only two of the original line up surviving: Eddie Edwards and Tony Sbarbaro.

Despite the crude methods employed, the original 1917-1918 recordings remain electrifying thanks to the technical genius of the recording engineer Charles Sooy. The recordings were acoustic, with the sound captured by a huge horn that transferred the sound waves directly to a revolving wax disc. Sooy ensured that all the instruments would be heard by placing them at different distances from the recording horn. The least easily heard of these instruments was the piano of Henry Ragas, but the plaintive melodic line of his playing can be clearly heard in the piano breaks of his composition Bluin’ the Blues.

As Nick LaRocca put it “I played the melody, Edwards the harmony and Larry Shields put on the lace”. The brilliance of LaRocco’s melodic line, Edwards precise percussive trombone and Shields lightening and fluid clarinet breaks, together with Tony Sbarbaro’s drumming – which ranged from cow bells and Chinese blocks to snare and parade drums – are as exciting today as they were a hundred years ago.

I was classically trained for the piano by the late Lily Huban of the Reade Pianoforte School. But I had a great friend Michael Moran whose father had danced to the ODJB in London in 1920 and had a 10-inch LP of the band. This was a HMV record DLP 1056.

One evening about 15 years ago I challenged a friend John Aboud about the internet. He said you could find anything on it. I challenged him to find the Original Dixieland Jazz Band. In one minute he had done so and I learnt that the band had been reformed in New Orleans under the leadership of Nick LaRocca’s son, Jimmy LaRocca. Thanks to Gerry Godley of the Improvised Music Company and Harry Crosbie we brought them to Dublin to play for my 60th birthday party in the James Joyce Centre on North Great George’s Street. So it is my proud boast that I danced to Tiger Rag played by the Original Dixieland Jazz Band at midnight on my 60th birthday.

It would be wrong to ignore this historic centenary, particularly given the excitement and pleasure the ODJB have given to the public across the world for the last hundred years.