The appeal of Phil Collins? It's his friendly, happy face

Phil Collins, who plays Dublin on Sunday, is hip again – but for Patrick Freyne he always was 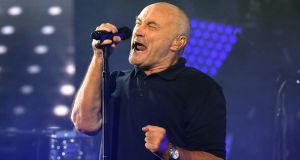 ‘Phil Collins fandom never took off in the way say, being a Curehead or a metalhead did.’ Photograph: Jean Catuffe/GC Images

When I was in my teens I was obsessed with the defeated music of middle-age. Eric Clapton, Chris De Burgh, Dire Straits – these were my jams. By my 15th birthday I had adopted the melodic but disappointed outlook of a middle-aged man on his third marriage. And I loved it.

In particular I loved the smooth tones of Phil Collins and Genesis, best appreciated on the new digital format of the compact disc rather than the third-generation blank tapes I could afford, and best enjoyed in a sophisticated cocktail bar rather than on the side of the street outside Chicken America in Newbridge, which I could also afford.

Phil Collins fandom never took off in the way say, being a Curehead or a metalhead did. There weren’t hordes of young folk donning V-neck sleeveless jumpers and slacks and aping male-pattern baldness in those days, but the soulful Sussudio sticksman touched me nonetheless.

So how can I explain the appeal of Phil Collins? Let’s start with his friendly happy face (editor’s note: seriously?!). Phil Collins is made up of simple geometric shapes. To draw Phil Collins you just need to draw a circle with an upside-down question mark on the forehead (representing his hair) and an upside down M for his dimpled chin. He basically looks like an old baby.

He’s so appealing in an elderly-infant/friendly-uncle kind of way that the video for You Can’t Hurry Love features three versions of that amorous slow-coach, distinguished only by differing attitudes to sunglasses and ties.

The 1980s Phil Collins liked to lark about in his videos. He wasn’t averse to pretending his drum sticks were a microphone in the video for the jaunty but existentially troubling Invisible Touch (“A meditation on intangibility” according to music critic Patrick Bateman) or engaging in some rough housing with his silver-throated namesake Philip Bailey in their ironically titled Easy Lover (she doesn’t sound “easy” at all; even at this stage Phil knew that love was pain).

But the most important thing about Phil Collins was that the man undeniably knew his way around a musical hook – just listen to epic poptacularity of Against All Odds or the delightful, lyrical gibberising of Sussudio (what does ‘Sussudio’ even mean? Phil’s not telling!).

Now, I’m with the aforementioned cultural commentator Patrick Bateman* when he says he found early Genesis a little too complex and intellectual, fronted as it was by that overrated proggy weirdster Peter Gabriel (Phil was but a humble drummer in the early days).

But Phil spent those years studying at the feet of sometime Genesis producer Brian Eno, learning how to achieve a clean, high-tech, pop production. In 1981, In the Air Tonight more or less introduced the world to the much-loved reverby gated drum sound of the era.

Before long he was bi-locating across the Atlantic to appear on two different stages for Live Aid and his music was appearing on Miami Vice (a 1980s version of True Detective, except good).

Phil was, however, a complex man. He appeared on Top of the Pops to perform In the Air Tonight accompanied by a paint pot. At the time it was believed that this was because his wife had left him for a decorator. He has denied this, which is, let’s face it, a terrible thing to have to deny, and if I’m ever on Top of the Pops in the wake of a marriage break-up, I hope there are no such symbolic DIY-related misunderstandings (I thought about such scenarios a lot as a teenager).

He also “acted” in the film Buster as the eponymous great train robber and for the soundtrack he sang the melodic baby-boomer throwback A Groovy Kind of Love. Phil may have a gift for melody but saying words convincingly eluded him.

By the end of the 1980s “Phil” and “Collins” were becoming bywords for 1980s pop excess, and his music seemed to radiate the musk of wine bars and tax-efficiency. Despite operating in a musical genre best known for youthful rebellion, he had somehow managed to make pop stardom look like a midlife crisis, and the zeitgeist left him behind in favour of grittier, grungier fare.

Well, I don’t need to tell you, but the zeitgeist was wrong. As the new millennium dawned, Phil, in seclusion with his synths, paint pots and memories, was rediscovered.

His smooth, synthy wisdom, melodic nous and gated drum-tracks, much maligned by the snooty bohemians of yore, were considered eminently sampleable by a new wave of hip-hop and pop pioneers (Kanye West, Lorde and Pharrell Williams have all said Phil was a big influence).

I like to think that from his secluded eyrie Phil watched his renaissance with his little button eyes (lowercase ‘o’s) widening and that a smile (a sideways bracket symbol like this one:) broke out upon his perfectly circular face.

It’s a generational crisis, of course. I have friends who walk around roaring and kicking things shouting “No! No!” at the news that Phil Collins is cool now (I should probably stop ringing them in the middle of the night to tell them). They can’t let it go. “No!” they scream. “F*ck that. No!”

This is the problem with cool. One minute you think you’ve got it sussed with your mockery of whatever musicians your generation has chosen to hate, then along come younger people, who’ve never fought in a war or wrangled with dial-up internet, and they make you look like a big eejit.

Not me. I knew all along. Phil Collins has been repurposed. He is hip now and so am I. Deal with it.