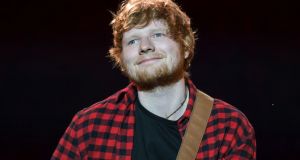 Hotels in Dublin, Cork, Galway and Belfast have increased their prices by up to €300 to coincide with pop star Ed Sheeran’s seven-date Irish tour in 2018.

Looking at price comparison website Hotels.com, hotels in the four cities are showing big price differences when compared with the week before the concerts, which take place between May 4th and 18th, 2018. Tickets are not due to go on sale until Saturday, July 8th.

In Dublin, a room at the Academy Plaza hotel, just off O’Connell Street, jumps from €127 to €424, the largest difference of the hotels surveyed. At the the Maldron Hotel, on Parnell Square, prices are up from €161 to €399, and at Jurys Inn Christchurch, rooms are priced €329, up from €119. Dates for the Dublin concerts are May 16th and 18th in the Phoenix Park.

In Cork, where Sheeran plays Páirc Uí Chaoimh on May 4th and 5th, rooms at the Metropole cost €210, up from €109 the previous week. The Rochestown Park hotel, on the outskirts of the city, rises from €123 to €275 and the biggest jump is at the four-star River Lee Hotel, from €145 to €389. Cork is suffering from a dearth of hotels at the moment, which may be affecting prices.

In Galway, setting for Sheeran’s hit song Galway Girl, there are almost no rooms available around the May 12th and 13th concerts at Pearse Stadium – even the hostels are almost full. The Menlo Park jumps from €107 to €274, the Clayton from €104 to €275, and the four-star Meyrick on Eyre Square from €169 to €319 though Sunday night is available for €209. Dates are May 12th and 13 in Pearse Stadium.

Dermott Jewell of the Consumer Association of Ireland accused hotels of “price-gouging”. “You can’t keep fleecing people. It is entirely wrong and unethical for the hotel industry to think they can keep doing this. The Government helped them out in 2011 by reducing the VAT rate to 9 per cent and it is time for the Minister for Finance to review it,” he said.

The Irish Hotels Federation responded with a statement about prices. “Irish hotel room rates are highly competitive compared to other European city destinations. As always, the Irish Hotels Federation recommends that people book early to get the best value room rates and do not rely on just one source when comparing accommodation prices. It is also advisable for people to check hotels’ own websites, where prices are often better and promotional rates may be available.

“Typically, well over 80 per cent of room bookings for large events and busy weekends are booked well in advance and represent good value. It is generally the final 10 per cent of room stock that would experience noticeable movement towards the registered public rates – which is the rate displayed in bedrooms and in Fáilte Ireland guides.”

Ed Sheeran tickets go on sale on Saturday, July 8th at 9am and, in an effort to avoid the sale of tickets at inflated prices, the maximum number of tickets you can buy is four. Concert-goers are expected to bring tickets, booking confirmation and credit card, plus a valid form of ID. Those who do not have all the requirements risk not being admitted.

Resold tickets will only be valid if sold through the website Twicket, the official resale partner.