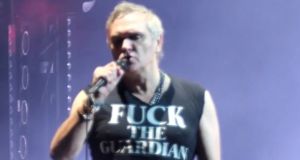 Earlier this month Morrissey ejected an anti-far-right protester from his gig in Portland. Photograph: Youtube

Morrissey has performed in Los Angeles wearing a vest with the slogan “F**k the Guardian”. The former Smiths frontman wore the top during a concert at the Hollywood Bowl on Saturday, weeks after he described the newspaper as “the voice of all that is wrong and sad about modern Britain”.

The 60-year-old singer, who has repeatedly expressed support for the far-right party For Britain, has increasingly been attacking the Guardian in recent months.

Writing on his personal website in May, Morrissey claimed he was the victim of an “inexhaustible hate campaign” by the Guardian, imploring his supporters: “Please do not buy this wretched hate-paper, whose every 2019 utterance echoes the late Mary Whitehouse.”

During a May performance on the Tonight Show Starring Jimmy Fallon, Morrissey wore a For Britain badge. In June, he reaffirmed his support for the party in an interview with his nephew, published again on his own website.

Earlier this month he ejected an anti-far-right protester from his concert in Portland. The protester had been carrying two posters, one which depicted the logo of For Britain struck through by a red line, while the other read: “Bigmouth indeed.”

In July, Billy Bragg condemned Morrissey for sharing a video from a YouTube channel that argued that the British establishment was using Stormzy to promote multiculturalism at the expense of white culture.

The Guardian gave his most recent album, California Son, a one-star review.  – Guardian