Cork Jazz Festival fails to move with the times

This year’s jazz festival has gone back to old habits, with some not-really-jazz headliners 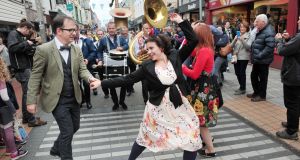 Jazz is improvised music, but looking at the programme for this year’s Guinness Cork Jazz Festival, there may be more improvisation happening off-stage than on. After last year’s promised “renaissance”, which saw a new artistic director installed and an emphasis on more contemporary performers, this year’s somewhat threadbare programme will strike many as a return to business as usual at the Leeside festival. There are headliners in the not-really-jazz category (and some, like Aslan and Martha Reeves, in the not-jazz-at-all category) and the usual parade of novelty and heritage acts filling the side stages.

Commenting on the lack of contemporary jazz in the main programme, one respected member of Cork’s music community told The Irish Times that the festival had “reverted to type”, and that whatever credibility this year’s programme has as a festival of jazz is to be found in the strands that have been programmed independently, such as those at the Triskel Arts Centre, programmed by Triskel director Tony Sheehan, and the Green Room at the Opera House, programmed by Cork trombonist Paul Dunlea.

Speculation continues to surround the departure of Sinéad Dunphy, who was announced with much fanfare last year as the new director of the 40-year-old festival. Dunphy, a former director of the Cork Choral Festival and a respected figure on the city’s music scene, came to the role promising to bring much-needed credibility, with a renewed emphasis on jazz as an evolving contemporary art form and a commitment, after years of neglect, to presenting the extraordinary talent now to be found on the domestic scene. But Dunphy’s abrupt dismissal after a single festival has thrown those plans into disarray.

There is now a growing cohort of Irish musicians producing work that is creative, challenging and plugged into the international creative music scene

The failure of the festival to appoint a successor raises serious questions about the festival’s governance, and calls into question the commitment of its sponsor to anything resembling artistic credibility. Despite repeated requests from The Irish Times about the artistic direction of this year’s event, it has proved impossible to discover how programming decisions have been made, or who is making them.

In a brief statement, Guinness’s parent company, Diageo, would only say that “the artistic direction and programming of the 2019 festival is being managed by a team . . . made up of the Guinness Cork Jazz Festival committee combined with our event partners Verve Marketing and our music booking agents, AMA Music Agency . . . as well as the Diageo sponsorship team, who, together, have devised an exciting programme of activity”. But, as a major international festival of music, Cork surely deserves a director with a background in the music and an understanding of developments in the art form.

The plot thickened over the summer when Dunphy filed an unfair dismissal suit against the festival organisers, claiming that she was summarily fired by Diageo and their agents, the Verve Marketing Agency in Dublin. That case has yet to come before the courts. But it is clear that the big loser is the festival itself, which has become a laughing stock amongst the jazz community in Ireland and further afield, its reputation damaged by cancelled bookings, unfulfilled promises and continuing uncertainty. This year’s thin and confused programme was always going to raise questions about the future of the festival, with some believing now that a change in the funding structure would be in the longterm interests of the festival.

There will always be a question about whether jazz fans have a right to expect jazz at a jazz festival. A trend over the last few decades has seen big international “jazz” festivals like Cork programming non-jazz acts to boost audience and raise profile. This, it has to be presumed, is driven by pressure from sponsors and commercial stakeholders, though no one disputes Diageo’s right to promote its products in whatever way is open to it.

But the Cork Jazz Festival is more than just a promotional opportunity for a drinks manufacturer. Though it may have its roots in commerce – the original festival was conceived by a marketing manager at the Metropole Hotel to fill hotel rooms on the October bank holiday – the festival has become a major event on the cultural calendar in Ireland and, in theory, a platform for the state of the art form in Ireland. The clue is in the name.

Many in the Irish jazz community are now asking whether it is appropriate that the festival should be controlled so completely by its sponsor and apparently programmed without any expert jazz input. Though in theory the voluntary festival committee still has a role, The Irish Times understands that all booking decisions are ultimately signed-off by Diageo’s head of sponsorship, Rory Sheridan, who was unavailable to comment on the issues raised in this article.

What has changed in the 40 odd years since the festival began is the status of the music, and the meaning of the word “jazz” in Ireland and across Europe. When the Cork Jazz Festival began, jazz was seen as a largely American art form, with headline performers almost entirely imported from the US. To be fair, at the time there were only a handful of musicians in Ireland playing jazz at a high level and, many would argue, only one – the late, great Louis Stewart – who could hold his own on an international stage. But the rise of a new generation of Irish and Irish-based jazz musicians, graduating in their hundreds from third-level jazz courses in Dublin, Belfast and Cork, has transformed the scene. There is now a growing cohort of Ireland-based musicians performing at a level that is as high as anywhere in the world, producing work that is creative, challenging and plugged into the international creative music scene.

The city, and the nation, deserves a festival that is artistically credible and fiscally robust

“Jazz” in the 21st century is becoming the new art music of our time, a wide and welcoming community of musicians who are finding their own voices and new audiences. While classic American jazz of the post-bop era remains an inspiration, this new generation are drawing on many strands of global music, from their own folk traditions, from classical music, and from contemporary rock and pop.

Other Irish jazz festivals in Bray, Belfast, Galway and Sligo are putting Cork to shame, drawing ever-growing audiences to credible programmes of high-level creative music. But Cork seems stuck in the 1970s, still peddling an ersatz version of the “jazz” life.

The Cork Jazz Festival remains an important international music event, and the potential for it to move with the times and develop a new audience for the music was demonstrated last year. The city, and the nation, deserves a festival that is artistically credible and fiscally robust – the Cork Jazz Festival is at its best when it celebrates this ever-evolving art form.

10 to watch at the Cork Jazz Festival

Kurt Elling
Cork City Hall
Saturday, October 26th
Until Gregory Porter came along, Elling was the pre-eminent male singer in jazz – his show, ‘A Century of Heroes’ is a celebration of greats like Nat King Cole and Shirely Horn

Fred Hersch Trio
Everyman
Sunday, October 27th
The great New York pianist is in frail health and fans will be hoping he makes it this time after cancelling his appearance at Bray earlier in the year

Paul Dunlea
Green Room at Cork Opera House
Sunday, October 27th
The trombonist has curated the Green Room series of Irish jazz at the Opera House – and he appears himself with Derry-born trumpet star Ryan Quigley