Morrissey kicks out anti-fascist protester from US concert 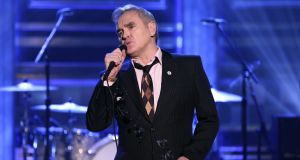 Morrissey: the singer removed an anti-fascist protester from his concert. Photograph: Andrew Lipovsky/Getty

Morrissey has ejected an anti-far-right protester from a show in Portland in the United States. During his performance at the city’s Moda Center on Monday night, a woman held up two signs. One depicted the logo of the anti-Islam party For Britain struck through by a red line. The other read: “Bigmouth indeed.”

In fan footage from the concert, Morrissey can be seen addressing the woman after the second song of the night. “Let’s be quite frank,” he says. “When you with the sign are removed, I will continue.” His fans then join in as he repeatedly shouts “go”, “we don’t need you” and “goodbye”, calling upon his lighting technician to bring up the house lights.

The protester left, and Morrissey performed Hairdresser on Fire from his 1988 single Suedehead. Morrissey’s team has not responded to any request for comment.

In May, Morrissey wore a For Britain badge during a performance on the Tonight Show Starring Jimmy Fallon. In June, he reaffirmed his support for the party in an interview with his nephew, published on his own website.

“The UK is a dangerously hateful place now, and I think we need someone to put a stop to the lunacy and to speak for everyone,” he said. “I see [For Britain leader] Anne Marie Waters as this person. She is extremely intelligent, ferociously dedicated to this country, she is very engaging and also very funny at times.”

His support for the party led Cardiff’s Spillers, the world’s oldest record shop, to ban his records from sale. Mersey Rail also banned Morrissey promotional posters, saying that they did not “meet the organisation’s values”. Morrissey responded: “It’s very Third Reich, isn’t it? And it proves how only the feelings of the most narrow-minded can be considered within the British arts.”

In July, Billy Bragg said it was “beyond doubt” that Morrissey was spreading far-right ideas after the singer shared a YouTube video that argued that the British establishment was using Stormzy to promote multiculturalism at the expense of white culture. Bragg also criticised the Killers frontman Brandon Flowers for describing Morrissey as “still a king”.

Morrissey’s ongoing US tour, featuring support from alt-rock band Interpol, has been plagued by poor ticket sales. Fans reported that two-thirds of the Moda Center was curtained off. A subsequent date in Seattle on Tuesday was cancelled. The promoter’s website said that the cancellation was “due to circumstances beyond our control”.

In a post on Morrissey Central, the 60-year-old singer described the atmosphere on the tour as “fantastic … and full of hope … at an urgent time when most modern music cannot provide one genuine insight.” The tour is due to resume in San Francisco tomorrow, October 3rd. – Guardian