The Veiled Prophet of Khorassan in Wexford; American conductor JoAnn Falletta at NCH 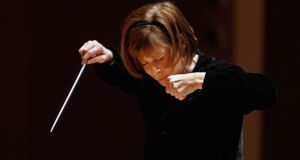 PHILIP GLASS RESIDENCY
National Concert Hall, Dublin (also Sunday 27)
There’s a Philip Glass marathon at the National Concert Hall this weekend. The first full performance of the 200-minutes-plus of his early Music in 12 Parts will, according to the hall, run for “a total of five hours with two short intermissions and an hour-long dinner break”. Or just pack your own sandwiches. The work, which will be performed by the Philip Glass Ensemble, is at quite a remove from the composer’s much more frequently heard later style. As fellow composer Nico Muhly put it, Music in 12 Parts “sets up a million rules about how the music is going to work and then basically breaks them, over the course of its enormous length. It’s both the pinnacle of something and also kind of the escape route from it.” The performance starts at 6pm. Glass’s NCH residency will also include a screening of Godfrey Reggio’s 1982 film Koyaanisqatsi, with a live performance of Glass’s score.

THE VEILED PROPHET OF KHORASSAN
Wexford Festival Opera, National Opera House, Wexford
Charles Villiers Stanford’s first opera, The Veiled Prophet of Khorassan, has a most unusual history. The 27-year-old Dubliner completed the work in Cambridge in 1879 and the opera was premiered in 1881, at Hanover in Germany. It was performed in a German translation of the English-language libretto W Barclay Squire had based on a tale from Thomas Moore’s Lalla Rookh. The opera has been produced only once since then, perversely in an Italian translation, at Covent Garden in 1893, though the RTÉ NSO did record some excerpts – including an aria sung by soprano Virginia Kerr – under Colman Pearce for the Marco Polo label with the RTÉ NSO in the 1990s. Una Hunt’s Heritage Music Productions is teaming up with Wexford Festival Opera for a late afternoon (5pm) concert performance conducted by David Brophy in the National Opera House. The cast for this belated premiere of the original English version includes Thomas D Hopkinson, Simon Mechlinski, Sinéad Campbell-Wallace, Mairéad Buicke, Gavan Ring, John Molloy and Dominick Felix.

RTÉ NSO/JOANN FALLETTA
National Concert Hall, Dublin
There’s a Mediterranean link between the three works in JoAnn Falletta’s programme with the RTÉ NSO. German cellist Alban Gerhardt is the soloist in Richard Strauss’s great musical portrait of Cervantes’s Don Quixote. Also on offer are two of the colourful symphonic poems from Respighi’s Roman trilogy, the Fountains of Rome and the Pines of Rome. The Pines of Rome, composed in 1924, has a special place in musical history, as the first work to specify the inclusion of pre-recorded material: the playback of the song of the nightingale from a 78rpm, acoustically-recorded disc, which was identified in the score by its catalogue number. The concert starts at 7.30pm.