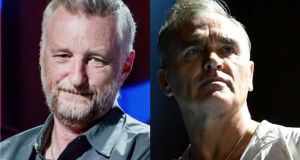 Billy Bragg has condemned Morrissey for sharing what he described as a “white supremacist video” from a YouTube channel that argued that the British establishment is using Stormzy to promote multiculturalism at the expense of white culture.

The video, which has since been removed, contrasted the positive critical response to Stormzy’s headline set at Glastonbury with headlines detailing Morrissey’s support for far-right groups. Morrissey posted it on his de facto website, Morrissey Central, under the title: “Nothing But Blue Skies For Stormzy … the gallows for Morrissey”.

Writing on Faceboo, Bragg said: “My first thought was to wonder what kind of websites Morrissey must be trawling in order to be able to find and repost this clip on the same day that it appeared online?” He questioned why Morrissey’s post had not received more coverage in the media.

Morrissey has not responded to Bragg’s remarks.

Bragg questions remarks made by Killers frontman Brandon Flowers to an NME reporter who asked the noted Smiths fan how he felt about Morrissey in light of his explicit support for the far-right party For Britain. “He’s still a king,” Flowers said. “He’s unparalleled in what he’s achieved and his prowess and his lyrics and his sense of melody. It’s just incredible. I forgot he was in hot water, though, so I shouldn’t have brought him up.”

Bragg wrote: “I have to wonder if Flowers really understands the ramifications of Morrissey’s expressions of support for the far-right For Britain Party?” In May, Morrissey performed on The Tonight Show Starring Jimmy Fallon wearing a badge in support of the party, and affirmed his support in a recent interview with his nephew for Morrissey Central.

Bragg asked of Flowers: “As the writer of the powerful Killers song Land of the Free, does he know that For Britain wants to build the kind of barriers to immigration that Flowers condemns in that lyric?”

Morrissey has claimed that the media who report on his views are pursuing a vendetta against him. In an interview posted on Morrissey Central, he said that “as a so-called entertainer, I have no human rights”.

Bragg described this as a “ridiculous position made all the more troubling by the fact that it is a common trope among rightwing reactionaries. The notion that certain individuals are not allowed to say certain things is spurious, not least because it is most often invoked after they’ve made their offensive comments. Look closely at their claims and you’ll find that what they are actually complaining about is the fact that they have been challenged.”

Bragg drew attention to a new report by the Institute for Strategic Dialogue, a UK-based anti-extremist organisation, that said the nationalist “great replacement” theory that the white Christian European population is being replaced by non-European people is entering mainstream public discourse.

He continued: “Those who claim that this has no relevance to his stature as an artist should ask themselves if, by demanding that we separate the singer from the song, they too are helping to propagate this racist creed.” – Guardian

The Goop Lab: One episode is about the vulva. I’ll probably watch that with my parents
Real news has value SUBSCRIBE