The €6,500 Irish whiskey that sold out before it even went to market 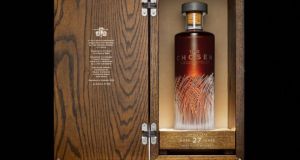 The Chosen is the most expensive bottle of Irish whiskey ever sold. Just 100 bottles have been made.

Would you buy a bottle of Irish whiskey worth €6,500? When whiskey bonder Louise McGuane located a single cask of single malt from 1991, she realised she did not have the money to buy it.

So she went looking for investors to purchase the cask. Once the money was secured, she then set about creating The Chosen, the most expensive bottle of Irish whiskey ever sold. Just 100 bottles, the entire content of the cask, were made.

Scotch and Japanese whiskies are frequently sold for eye-watering sums to individuals who care more about the taste than about the price, but nobody had attempted before to sell this volume of Irish whiskey at this price.

Ms McGuane set up JJ Corry Irish Whiskey on the family farm in Cooraclare, Co Clare along the Wild Atlantic Way in 2015.

As a whiskey bonder, she does not distil the spirit herself but sources it from other distilleries and matures it in a purpose-built rackhouse.

Having worked in high-end alcohol retailing all her career, she knew there might be buyers for it in what is known as the “super-premium market”.

She explained: “I have been working on this plan since the foundation of the business. Irish whiskey is in very significant growth at both ends of the market and also at the super-premium level. I thought if nobody is going to break open this sub-category, I was going to do it.”

Nevertheless, she said the decision to create The Chosen was the “biggest gamble I have ever taken in my life and I have a very high risk tolerance. There was times I wanted to go back in time and kick myself. We put everything on the line and now it has paid off.”

The Chosen was bottled aged 27 years at the “pinnacle of maturation” and at a high alcohol by volume (52 per cent). She describes it as a “superlative example of an Irish single malt”

The tasting notes that accompany the bottle suggest it is “rich and superbly elegant with notes of toffee, rancio, dried mango and chestnut. This palate of intensely ripe fruits is complimented by incense and a luscious oily texture. The finish is long with just a touch of smoke”.

The bottle is intended to be a collector’s item in itself. It is hand cut crystal from J Hill’s Standard in Waterford. The cabinet is made of ash and is also handmade by Glasgow-based cabinet-maker John Galvin.

“They are all completely different, they are all unique,” she said. “It’s a piece people will use in their home once they have drunk the whiskey.”

Ms McGuane started selling the whiskey before it was bottled. She sold 12 bottles in Asia direct to individuals. The rest were sold to whiskey specialist shops. “I’m trying to keep one for archives. Other than that, they are all gone.

“I knew I had to go to them with something that would blow the doors off of anything that Scotch has ever done. The whiskey, the presentation had to stand up and had to go toe-to-toe with £50,000 bottles from Scotland.

“All of the feedback we have received is that it stands up. You cannot put a price on craftsmanship.

“There’s a very big difference between value and price. I don’t like the price conversation. The point is that this is a beautiful whiskey presented in collaboration with artists from Ireland. It is a representation of the best we can be in Irish whiskey.”