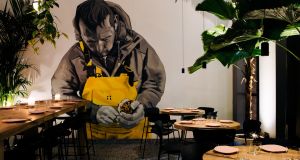 New restaurant openings in Dublin have been coming thick and fast in recent times, but perhaps the most exciting is Allta, something completely different for the city, which opens its doors to the public next Wednesday.

“I want this to be fun and informal, but with super serious food,” chef Niall Davidson says of the 48-seat wine bar he is opening on the corner of Setanta Place and South Frederick Street. “I want it to be the complete opposite of a fine dining, white table cloth venture, but with all the integrity of the best restaurants in the world.”

The space is dominated by a central communal table for 12, a stunning rectangular Irish elm piece that has been gently beeswaxed, with round tables for two and for four on either side. The kitchen is visible from the diningroom, and downstairs there is a private room seating six to 12.

Irish crafts have been used wherever possible, with bespoke sound system and shelving from carpenter and former DJ Toby Hatchett. Paddy T O’Sullivan, whose Cromane oysters feature on the menu, is depicted on the wall in a giant mural by Subset, informed by a photograph by Ed Schofield.

Davidson is adamant that Allta is a wine bar, first and foremost, and there are more than 100 wines on the list, curated by sommelier Ian Fitzpatrick, with 30 of them available by the glass. Beers, cocktails, sake and a daily-changing non-alcoholic option are also available.

But the food will be a major draw here, and it is a fresh and exciting offering. Irish ingredients, including house-made charcuterie, are the cornerstone of the menu, which is a short, one-page selection of snacks, small plates and sharing plates. The food here “will taste delicious” but will be presented a with a minimum of fuss, is how Davidson describes the approach.

In reality, the four snacks, bread course, six/seven small and large plates and one dessert that appear on the menu are complex, highly evolved dishes that Davidson and his partner in the venture, fellow chef Hugh Higgins, have spent the past nine months devising and perfecting from a test kitchen in Terenure.

“It’s the first time in our careers that we’ve had time to stop, and teach ourselves loads of new skills. Every flavour we produce from this little kitchen is made by ourselves; the only things we buy in are olive oil, white chocolate and pasta flour from Italy, because we can’t find anyone to mill it fine enough yet here in Ireland, ” says Davidson.

An array of house-made misos, vinegars and soys, each with a distinct flavour profile, will bring complexity to their dishes. Toasted malt vinegar, an Irish version of the deeply savoury and smoky Chinese black vinegar, for example, gets turned into a gel and served with fresh pasta stuffed with chicken liver mousse.

The charcuterie selection will be a big draw here, with cured salami – currently a fuet and a spicy ventricina – as well as mortadella, salami cotto, pancetta, guanciale and bresaola, on rotation, and served with a generous side of pickled wild mushrooms. “This may be the simplest thing to look at, but it was the hardest to get right,” Davidson says.

The snacks range in price from €4.50 to €8.50, with small and large plates running from €12.50. Barbecued lamb and seaweed pappardelle, with Cáis na Tire cheese and wild marjoram, is the most expensive dish on the list, at €18. The wine by the glass selection starts at €6.50.

Scottish-born and Derry-raised Davidson has cooked at some of London’s best known restaurants including St John and Chiltern Firehouse, and Higgins was at Luna, where he developed his love for making fresh pasta. They are joined in the kitchen by sous chef Christine Walsh, formerly of Loam in Galway.

Front of house is led by Londoner Marni Bennett, along with Grainne Bates, who may be familiar to diners from her previous positions at Forest & Marcy and Piglet wine bar.

The project has been backed by Singaporean investors who have a significant Irish property portfolio that includes the Trinity Lodge hotel adjoining Allta, and Sheen Falls Lodge hotel in Kenmare. Davidson has been working on this project for 18 months, since leaving Nuala, his London restaurant that specialised in cooking over fire. He hopes that Allta will become a sister restaurant to another venture to open in Dublin next year – a 12-seater, no menu, counter-style diningroom.

Allta will be open from Wednesday, November 20th, Tuesday to Saturday, serving the full menu from 5pm-10pm and snacks and drinks until midnight. The private diningroom is available for bookings from December 1st. Lunch service will be added in January. Bookings go live at allta.ie at lunchtime on Friday, and walk-ins will be accommodated, where possible, at the communal table.

Lifting the lockdown: the new way of buying and selling houses
3

Fish sauce: the secret ingredient that makes everything taste better
4

Irishman in Sweden: Covid-19 testing is not widespread here
5

‘I saw young girls get kicked, hit, sprayed and dragged off gasping for air’
10