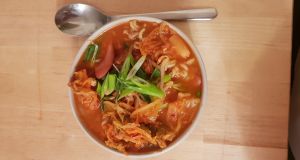 I love making this hot pot in winter. It’s quick and easy, but still comforting and tasty. It’s great for having mates over as well, as it’s easy to make loads of, and easy on the pocket as well.

Budae Jjigae is a soup that appeared around the time of the armistice that ended the Korean war, using ingredients taken from American camps. At the surface level, it looks like straight up Korean goodness, rich in gochujang chilli paste and kimchi, but this “army base stew” traditionally also featured hot dog sausages, Spam, baked beans and whatever other ingredients were easily found at the time.

I’ve kept my version a bit more simple, replacing the hot dogs with smoked Polish sausage, the Spam (no thanks) with ham, and omitted the baked beans and American cheese which can also sometimes feature.

This is quick to make, delicious to eat and a great way to introduce anyone to Korean food. Also, with the whole basis of this soup being kimchi and pork, it’s a little nod to bacon and cabbage.

This is a hugely adaptable soup; you can also add mushrooms, replace the noodles with macaroni or other pastas and generally have a bit of fun with it.

How to make it:

1. Add all soup base ingredients to a pot and stir to combine before adding the stock, half the kimchi, sausage and ham. Cook until combined and fragrant, about five minutes.

2. Add noodles and cook until they are done. Top with scallions and remaining kimchi.

Marcus O’Laoire is a DJ, party thrower and cook instagram.com/marcusthedj