Martin Hayes: ‘I’m a complete guerrilla performer from the side of a mountain’

Experimentation and evolution are essential to music, says Hayes, who doesn’t miss the days of career-long contracts with labels 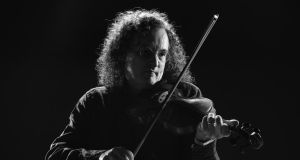 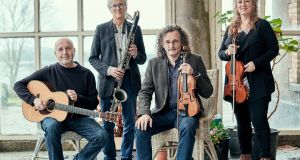 The bare-boned sound of fiddle and guitar is what has defined Martin Hayes and Dennis Cahill since they first encountered one another almost three decades ago. Together, Martin suggests, they’ve tried to “to sculpt a sound that is somewhat minimalist but based on revealing the latent expressive potential of the melody”.

Over that period, and particularly in recent years, the pair have invested heavily in other collaborations too: Hayes with Triúir (a trio featuring Peadar Ó Riada and Caoimhín Ó Raghallaigh), with guitarist John Doyle and Lúnasa’s flute player Kevin Crawford and with The Tulla Céilí Band, with the pair together forming the foundation of the hugely successful five-piece übergroup, The Gloaming.

As the musical landscape has evolved in more recent years, the University of Limerick and the National Concert Hall have offered safe harbours of another kind, sponsoring and curating a number of other collaborative initiatives to fuel the pair’s creative juices even further.

And so The Martin Hayes Quartet has come to be: a highly resonant coming together of Hayes and Cahill with Doug Wieselman on bass clarinet and Liz Knowles on fiddle.

Hayes, ever the mindful musician, let his instincts guide him to this latest adventure, just as he has with previous collaborators.

“I always try to play as though I am freely dancing and singing at the same time,” he explains. “The body holds the rhythm and the heart generates the feeling in response to the beauty of the melodic line. Dennis Cahill’s playing and partnership over the years has been an invaluable support to me in realising all of these musical goals. And this is the starting point from which this quartet emerges.”

“Being in the moment” is a concept to which Hayes continually returns, along with the notion of “getting out of the way” of the music, so that it can find full flight in the spontaneity of the moment. In Wieselman and Knowles, he knew he had found kindred spirits.

During their first encounter at an Other Voices concert in 2011, Wieselman “coloured out the harmonic world around the tune as if he’d known these tunes his whole life”. Knowles and Hayes first met over two decades ago in Nova Scotia at a fiddle camp. She’s a fiddler who is classically trained, with a deep curiosity for and love of Scottish and Irish traditional music.

“Playing music with Liz is a delight,” Hayes says, “because one minute she’s playing a counter melody, the next she’s mirroring my version of the melody, or playing a rhythmic pattern. She manages to deploy all of her diverse musical skill in a way that helps give this ensemble its unique sound. Her playing in the quartet is integral to keeping the traditional melodic line knitted into the arrangements.”

Listening to the four-piece wend their way around The Boy In The Gap and the well-known piping tune associated with Seamus Ennis, Easter Snow, there’s clearly an intimacy and intuitive quality to the way they approach each tune individually and collectively.

“There’s a way of looking at things that has a jazz-like quality,” Hayes suggests. “Being in that moment, being reactive and allowing things to happen. One doesn’t have to play jazz to embrace that concept. There is a freedom, an opportunity to respond and react and for any person to change the conversation ever so slightly, which changes everybody else’s response. That said, Irish melodies are very central and important to what I do musically, and I’m not going to turn into a free jazz musician tomorrow, like!”

Where Hayes differs from some musicians is in his willingness to take creative leaps into the unknown.

“One dangerous thing is that if you have something that’s succeeding, there is a real tendency to grab onto it and hold onto it,” he notes. “What I’ve learned over the years is to not do that. To be willing to do another thing, even when something is successful. And not everything is successful. That doesn’t matter either. It’s just that you’re willing to go somewhere and in some subtle way you will most definitely learn something from every new experience. You should in theory come out the other end a little bit further along.”

“Trust is more important than planning at this stage,” he continues. “Having a clever plan often blocks you from things happening. Trusting the moment, and that you’ll be able to respond is something that I have faith in, so in a sense, that is the parachute.”

These creative adventures yield other fruits too, at a time when the musical landscape is constantly in a state of flux. The University of Limerick’s three-year affiliate relationship with Martin had made possible the quartet from its inception.

“It’s a very practical way of supporting the arts,” Hayes maintains. “Everything is changing: the record business is changing, how we advertise, how we communicate. This is another coming together of institutions who can share some common goals. The National Concert Hall is also a sponsor of this quartet and this album so we all have ways that we can help each other. It’s a kind of an extended collaboration I suppose.”

Hayes has no truck with the sentimentalists who would return to the old days of big record companies and career-long contracts.

“In some ways, having a big record company that ‘did’ something was a disempowering world,” he says. “In this world, it’s a coming together of shared interests, and who knows? The next time we do something it could be another way of doing it, like the creative process itself.”

The world of traditional music has been evolving at a pace. What does Hayes make of the landscape that accommodates not only The Gloaming but Ensemble Eriú, Saileog Ní Cheannabháin, Cormac Begley and The Tulla Céilí Band with such expansive ease?

“Seán Ó Riada and later The Bothy Band, The Chieftains and Planxty set a course in a way,” Hayes says. “There’s been an evolutionary process that stalls at times and then evolves and moves forward again. We’re also in a post-genre world, where Irish music is like a stream feeding into another river of music. So we’re getting all these other sounds that are not strictly traditional music. And at the same time, there are more people playing ‘east Clare music’ now than there ever were. So that side of the music is very strong.”

Experimentation and evolution are essential to the lifeblood of the music, Martin insists.

“I love all the experimentation going on. I don’t want traditional Irish music to forget its roots, but I think that all the experimentation at the edges is also very good, and I try to embody that in my own career as well. I’ll play a few céilís with the Tulla Céilí Band, and I’ll play a few sessions, and then with The Gloaming and with Dennis. You have to welcome it all really.”

Casting one’s gaze outwards as well as inward is important too, Martin believes.

“One of the challenges that Irish music has is making sure that it can connect with the wider musical world, and in some ways these projects are an attempt to communicate with people from different musical backgrounds, while creating an opening into this world of Irish traditional music as well.

“I believe in that notion that there are not that many accidents in life either,” he continues. “People come into your life, and you have to be aware of it when they cross your path.”

And even still, Hayes sees the crack that’s in everything.

“I think it’s important to have a willingness to go on even in the knowledge of your own lack of skill sometimes,” he says. “I’m not a properly trained musician; I’m a complete guerrilla performer from the side of a mountain. I have a lot of limitations which suggest that I should have tried to study music, but I just go ahead anyway, with all my lack of skill in one area. I’m not particularly equipped for a huge amount of collaborations but I just do them anyway.”