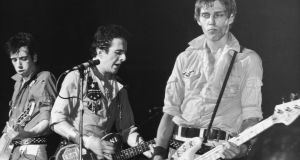 ‘This was a baptism of fire.”

Paul Tipping is remembering his time as the entertainments officer of the students union in Trinity College Dublin in 1977. His team of 20-year-olds had organised their first concert of the year, and their first ever event, in the college’s ornate 18th-century Exam Hall: two sets by The Clash, a band at the vanguard of the UK’s exploding punk scene, fresh from the success of their debut album. Tickets were £1.50.

“It was a really difficult time in Ireland and in Dublin,” says Tipping, now a retired schoolteacher living on the Isle of Man. “Bombs went off in May 1974, there was a war 50 miles up the road, economic recession. Music was in the doldrums. Then in UCD in June 1977, a lad was murdered at a punk gig. All these things came together.

“After the Miami [Showband] murder and bombs all over Dublin, very few international acts or British acts would tour, except through the colleges,” says Ian Wilson, who was then president of the students union. “Very few commercial promoters existed or could handle it: the colleges were deemed to be kind of neutral territory.”

Wilson had connected with Paul Charles, a London booking agent who was trying to get punk bands, many of whom were essentially banned from playing in England, over to Ireland. Through a network of college-based promoters – including Denis Desmond, later of MCD – bands would be able to safely tour here.

“The scale of what we did in that year was unprecedented,” says Wilson. “We were running through bands that were on Top of the Pops and had number one albums in the UK and Ireland. No college had ever done that before.”

Wilson put Charles in touch with Tipping and soon The Clash had two dates booked in Ireland: the Ulster Hall in Belfast on October 20th, 1977, and Trinity the following night. The band arrived in Belfast to find their show had been cancelled, after the insurance company got cold feet. There was a small riot.

There was then intense pressure from the administration in Trinity to stop the show. “We were organised and very determined, we didn’t give in,” says Wilson, regarding the students union’s stance. “They threatened hell and high water on us, because they didn’t know what was going to happen. We kind of had a rough idea what was going to happen; they didn’t have a clue.”

Trinity, at the time, saw what was happening as “a full-frontal assault

Wilson stresses the political aspect of the show. The union had just wrested control of the college bar, and was at the beginning of a boycott of on-campus dining facilities, in protest over price increases. It was selling condoms from the union shop at a time when contraception was illegal, while Wilson remembers some friends running a pirate radio station out of his rooms. These political interventions dovetailed with the raucous anti-authoritarianism of The Clash.

“We came at them [Trinity] from all angles,” says Wilson. “We were going to take the college on to provide better gigs, better services, get better deals for students, improve facilities, everything.”

Trinity, at the time, saw what was happening as “a full-frontal assault . . . We were the centre of this whole punk thing in Dublin; we became the focus because of this, which was a horrific, horrific outburst of the nastiest of youth culture as far as they were concerned.”

The culture-shock was obvious in Trinity’s front square on the evening of the gig. On one side, snotty punks clambered to get into the Exam Hall. On the other, a more refined gathering of luminaries – people such as Conor Cruise O’Brien, Noel Browne and Bernadette McAliskey – queued up in dinner jackets and evening dress for the Historical Society’s annual dinner. As Wilson says, it was into this genteel environment that “1,000 people with safety pins and bin liners on them” came rampaging.

Wilson and Tipping suggest that everyone there understood the music, but few had any real experience of British punk culture. While there were some credible Irish punk bands, their image was typically second-hand, reconstructed from reports in the music press and whatever records they could get their hands on. “The Boomtown Rats were playing, The Radiators from Space,” says Tipping. “Then in came The Clash – it turned everything upside down.”

The Clash played two sets, each clocking in at about 40 minutes. Tipping reckons that frustration from the previous night in Belfast was a bonus. “They’d been pissed about in England, and then they came into Paul Charles and he said, ‘right, we’re going to Ireland and you’re going to play’. They come to Ireland, get to Belfast, and nothing happens. They were very frustrated.”

“It was one of the most full-on things I’d ever been at, it was totally manic,” says Wilson. “They just played these brutal short sets, screaming abuse at the crowd, then bang, they were gone. Wow! Frankly, if it had been the original one-hour set they were supposed to do, it would have been too much.”

The stage in the Exam Hall is about two feet high, so Tipping and Wilson enlisted a bunch of people to protect the band from their fans.

“It was so confusing, and fraught, and adrenaline-driven, that I just remember forming the human wall across the front, a gang of us trying to stop the stage being mobbed, and just being showered in gob,” says Wilson with a less-than-nostalgic sigh. “We were covered in it, and Strummer screaming at them, ‘Stop f**king gobbing! You’re so f**king cool!’ He was ranting at them about it, but it didn’t matter, they continued spitting everywhere.”

“I was a little bit on edge, thinking ‘God, this could go very awry’,” says Tipping. “But then, in the interval between the two shows, I had one of my brainwaves. I played cricket at Trinity and it slowly came into my mind that, down on the cricket pitch, to protect the crease and so on, there were barriers . . . We brought them back and we formed a two-tier barrier, which turned the whole Exam Hall into a kind of war zone.”

After the second set concluded and the crowd emptied out, Wilson and Tipping stayed behind to clean up, and discovered some gruesome artefacts in the process. “Somebody had brought in a load of sheep’s eyeballs and thrown them around the place, so we swept up a dozen sheep’s eyeballs, which was a bit odd,” says Wilson. “Somebody must have thought this was very punk, to bring along animals eyeballs and throw them around.”

Silly with ambition after the gig, Tipping and Wilson set about booking more punk bands. The Stranglers arrived in November, and The Buzzcocks appeared in January. The Sex Pistols were booked, but they fell apart before the gig could take place. Wilson can only laugh at the thoughts of what would have happened if Johnny Rotten and company had shown up.

The college authorities began demanding that gigs be kept below a certain volume in order to protect the Exam Hall’s plasterwork. They tried shutting down The Buzzcocks in mid-flight; Wilson refused to stop the show.

“Next day, we get a phone call and it goes, ‘You know the score, you’ve been warned, you’ve breached the regulations, permission for your next event has been withdrawn’,” says Wilson. “We said ‘fair enough’. This is over the weekend, so we wait until the Monday, and Paul went off to his mates in the papers, the evening papers in Dublin at the time – and remember no internet, no other means of communication at this stage.

“Evening papers in Dublin, front page, and all the national dailies the next day, the Irish Press, The Irish Times, the Examiner, all ran, front page, with pictures: ‘Chieftains concert banned for being too noisy.’ Paddy Malone going ‘I didn’t know I made so much noise’.”

'Punk was very, very fast... Bang bang, and it was gone. It splintered and became the New Wave'

The following year, The Clash returned to play the Top Hat in Dún Laoghaire, but by then something had already shifted in punk. It wasn’t quite the blistering force it had been 12 months previously.

“Punk was very, very fast,” says Wilson. “Bang bang, and it was gone. It splintered and became the New Wave, and elements of it were very quickly absorbed into the music mainstream. It was a very spontaneous movement.”

For Tipping and Wilson, that first flash of punk in the Exam Hall would never be beaten – Bono would later call it the greatest gig of his life.

Tipping is happy to recall the events from the far side of a teaching career. He’s not nostalgic, and he’s no punk now, but he can’t help but get excited as he trawls through his memories.

“Ah, it’s not something you could do forever, but a wee smell of it was amazing.”

Dialogues of the dead: Michel Déon and Ireland
Real news has value SUBSCRIBE