Friends remember the man and his music, as his only album gets a vinyl release 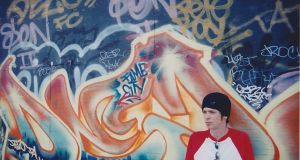 Before turn of the century, years before Glen Hansard and Markéta Irglová were to win their Oscar for Falling Slowly, Hansard’s group, The Frames, and Kíla, with their blend of trad and magic, were burgeoning forces, singer-songwriters Paddy Casey and Mundy were formulating their styles, and when singer Mic Christopher’s whole career lay ahead of him, Dublin’s streets were the epicentre of a burgeoning scene as many of these musicians lined its pavements busking.

“We’d break into ones and pairs from the early morning, make our pocket money for the week,” says Colm Mac Con Iomaire, a member of The Frames and Kíla, who was good friends with Christopher. “At the end of the day, around 30 of us would meet up for a communal busking session. It was quite a spectacle.

“It felt like a high watermark of community among musicians and bands. Or the beginning of a – Dublin-centred, probably, but Irish generally – music scene.”

Mic Christopher was key to that: the flat he shared with Hansard on Harcourt Street became the hang-out for the numerous loose groups they had in common. It was Christopher who introduced Hansard to Kíla.

“It’s hard to sum anyone up in a sentence, but you’d light up if you saw him,” remembers Rónán Ó Snodaigh, Kíla’s lead singer. “I felt thrilled to be his friend. It was nearly like a juvenile feeling, to be delighted to be friends with such a cool fella. Even when we were 18, as soon as he opened his mouth and started singing you felt like you were in the presence of greatness.”

But his light burned out too soon. In 2001, on tour with The Waterboys in Groningen, Netherlands, as the first major step in his solo career, a fall led to a brain swelling that put him in a coma. He never recovered.

“A year earlier he had a motorbike accident and he survived that, so when he was in a coma it was an especially surreal time,” remembers Mac Con Iomaire. “By virtue of him being in a coma, and then it took a while to get him back home, there was an extended wake. For us, his friends, it was a transformative, harrowing time of growing up. And when we looked around, we realised that it was him that brought us all together.”

It was these friends that rallied around to complete the debut album Christopher was so close to finishing: Skylarkin’.

Recorded with his former Mary Janes’ bandmate Karl Odlum producing, the rough tracks had already been laid down, ready to be completed according to some ideas he spoke of, once he returned from The Waterboys’ tour. Ó Snodaigh, Mac Con Iomaire and Hansard contributed, as did singers Lisa Hannigan, Gemma Hayes and musicians Simon Good and Dave Odlum.

“People wanted to be together, to talk about him and make sense of what happened. Finishing the record was a part of that,” says Hannigan. “I recorded some backing vocals and it was a gift to be there again in his flat, listening to those beautiful songs, hearing his voice in my ear. It felt useful, something you could do when there was nothing to be done.”

The result is now something of an acoustic classic, opened by his calling card of Heyday – a song regularly covered by The Coronas, Glen Hansard, and even by Bono, fittingly during a Christmas Eve busking session on Grafton Street – and closing with the equally positive Daydreaming, which bookend an otherwise emotionally complex series of songs, inspired partly by his friendships (I’ve Got Your Back) – but mostly by his relationship with Gemma Hayes, and the unrequited feelings he had for his close friend.

She hadn’t listened to the album since his death, but the evening before speaking to The Irish Times, she returned to it.

“I wondered what I’d feel after all this time,” she says, from her home in London. “Immediately, I felt joyful to hear his voice. And I got a rush of memories of being in his flat, where there were lots of cups of tea, lots of Fox’s Classics (biscuits). He was forever trying to get me to do backing vocals on everything, and I’d have to keep telling him I wasn’t a backing vocalist.

“I hadn’t fully let myself think about him, because it’s so sad. At the time we all felt like we were going to live forever, so to have a friend that was so young and alive die was absolutely devastating.”

Gemma Hayes: He had feelings for me and I didn’t have feelings for him. That unrequited love fuelled some of the songs, but there was a strong friendship there too

Their friendship began when he came to see one of her earlier shows, and then asked her out on an “old-fashioned date” afterwards.

“I saw him has a potential boyfriend for two weeks when we met initially, but I realised quickly he was somebody I wanted as a friend, so never got serious.

“It was then a case of ‘my mate fancies me’ – he had feelings for me and I didn’t have feelings for him. That unrequited love fuelled some of the songs, but there was a strong friendship there too. We’d be fine until drink was taken. We’d go to a session and all of a sudden the fact that he liked me in that way came up, and the fact I didn’t like him in that way came up. But the next day he’d apologise.

“In hindsight, that probably wasn’t the best thing for him. I was around 22 at the time, and now I’m older I probably would have dealt with things differently. I see that it was an imbalanced friendship and I should have walked away. But he was such a lovely guy to be around. I loved him very much, but you can’t force yourself to feel something about somebody.”

Ask Glen Hansard about how he perceived the relationship, and he concurs that Christopher’s longing for Hayes fed into Skylarkin’, but for the most part, he accepted their friendship.

“Gemma was his muse, she inspired a lot of the songs we hear,” he says. “He was lucky in love, let’s put it that way, but in as much as I can speak for Mic, and I don’t think I can, Gemma was the one that he fixated on. That doesn’t mean that she broke his heart, but that she caused the emotions that you can hear in the album.”

Of course, unrequited love is a universal feeling that music can often comfort, which perhaps explains why his music’s endured. On Spotify, Heyday has climbed over the million mark, and Christopher’s sister Maureen still receives messages from far-flung places such as South America and Spain, from new fans who’ve just been introduced to the record.

Some 15 years after its original release, which was exactly a year after his death, Skylarkin’ has been re-released on vinyl as the first release of Born Optimistic, a label founded by former friend and music scene veteran Donal Scannell.

The release came about fortuitously: in seeking Maureen’s approval to release it on vinyl, Scannell discovered she’d had the same idea and had received a delivery of 1,000 copies just four days previously.

“The vinyl itself is a totem to get people to pay attention,” says Scannell. “If people listen to it on Spotify and don’t buy the vinyl, it doesn’t matter. In five, 10 years’ time, we’re still going to have to find new ways to contextualise the record without leaving a bad taste. Motivation is the key: me and all the people on the record were all friends of his.” Indeed, the sole album is all we’re likely to hear; a few more songs lie in the vaults, such as Sally-Anne with lyrics as Gaeilge, but his family are careful about what’s released.

“To be respectful of his work, I always think of Mic and what he would have wanted.” says Maureen. “If he wasn’t willing to put something out, then I’m not doing it.

“After his death, people suggested making Skylarkin’ a double album, where his friends recorded certain songs he liked, but I said absolutely not, because he was working towards releasing this album, and that was what we should be putting out.”

Fortunately for his legacy, the strength and timelessness of the songs on Skylarkin’ means that it continues to be relevant – Ó Snodaigh describes it as a “laying a marker” for the Irish music scene; Mac Con Iomaire feels similar: “I’m delighted that it’s still being listened to and cited as an influence, but it’s not that surprising given he’s a beautiful songwriter and had a beautiful voice,” he says. “It’s so nice when you’re driving along and you suddenly hear Heyday on the radio. Long may it continue.”

Weathering With You: Thrills and humiliations of teenage romance
6