‘Medea’ misses the mark while ‘Risurrezione’ goes down a storm 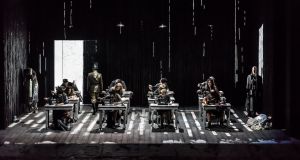 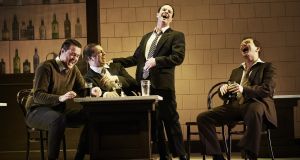 The cast of Counterparts in Dubliners. Photograph: Ros Kavanagh 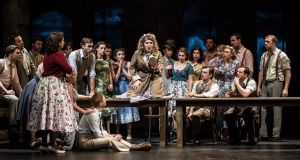 Some things are more meaningfully understood for what they are not rather than what they are. Brexit is about a Britain that’s not in the EU. That’s why the severance terms are so hard to pin down. Fianna Fáil is not Fine Gael. That’s how the Soldiers of Destiny can disassociate themselves from budget provisions they actually voted for. US President Donald Trump, one of the world’s most prolific liars, and certainly the most publicised, is not Barack Obama. You get it.

Cherubini’s Medea as directed by Fiona Shaw for Wexford Festival Opera is not any Medea that Shaw has engaged with in the past. It’s a clean slate exercise. And, as an explanatory feature in the festival’s programme book also makes clear, it’s also not quite the familiar, Italian version of the opera that Wexford seems to have expected Shaw to produce.

The transformation from the composer’s original Medée to today’s Medea saw the work change from a French-language piece with spoken dialogue into an Italian-language opera with recitatives by a minor, 19th-century German composer. It was this Medea that became a celebrated vehicle for the great Maria Callas in the mid 20th century.

Wexford’s Medea is also not the Cherubini original, though the production does highlight a few select moments by abandoning music for the spoken word, and conductor Stephen Barlow has sought to reach back to what he calls “Cherubini’s lean, sharp and elegantly classical articulations”.

What exactly the new Wexford Medea is is less clear. On the one hand it’s an updating – in a direction led, according to Shaw, by designer Annemarie Woods – that almost places the piece in the hair-trigger aggressive and troubled world of guests from the Jeremy Kyle show. We see them in the gym, toing and froing about love and a wedding that goes wrong, wrangling about the children, venting with a cleaning spray.

Neither the sounds of the orchestra from the pit, nor Cherubini’s vocal writing, often powerfully delivered by the committed cast, connect with the staging in any consistently cogent way. There is a profound, granitic power in Lisa Davidsen’s Medea. She has the vocal reach and the overdrive to do justice to a very demanding role. The effect is grippingly statuesque, conveying more an acceptance of the working out of destiny than any personal dilemma over the murder of family members past and present.

Adam Lau’s Creon, Ruth Iniesta’s Glauce, and Raffaella Lupinacci’s Neris function as satellites to Davidsen’s towering presence. Only Sergey Romanovsky’s Jason manages to cut through the chilling facade to make the most personalised connection, both as a character and with the audience, in an evening where little else really did.

Jacopo Foroni (1824-58) has been good to Wexford Festival Opera. The festival’s 2013 revival of his Cristina, Regina di Svezia, the first modern staging of the work, won plaudits including the prize for rediscovered work at the 2014 International Opera Awards.

Wexford is now paying back by staging a second Foroni opera. Margherita (1848) brought the composer to the attention of the operatic world in Milan when he was just 23.

Foroni’s first opera is a lighter affair than Cristina. The heroine finds her true love, Ernesto, on the wrong side of the law through a case of mistaken identity, and as a way of rescuing him signs a marriage contract to another man.

The story embraces corrupt officialdom, a feisty chorus, a noble intervention and much frustration when Ernesto hears of the contract without knowing the true background. All ends well except for the villain, who gets his just deserts.

Director Michael Sturm and designer Stefan Rieckhoff update the setting to the mid 20th-century, with bright 1950s dresses contrasted against a dark-grey background of what look like war-ravaged buildings.

The production’s handling of the work’s comic elements – the chorus running this way, then that, the self-indulgence of the lazy mayor – are rather cliched. And the singers do not really handle the music’s moments of patter with real precision.

The relationship which comes across most strongly is that of two women, Margherita and Giustina, sister of Ernesto. Mezzo soprano Alessandra Volpe’s Margherita has a lower register that’s somewhere between smoky and fruity, and a free and open upper register through which she delivers some of the opera’s most expressive singing.

Soprano Giuliana Gianfaldoni’s Giustina is steelier in tone, limited in heft in her lower range, but searing on high, and she tops out the climaxes in ensembles with diamond-like clarity.

Baritone Yuriy Yurchuk’s Count Rodolfo, the man whose testimony helps unwrangle the wrongs of the story, is appropriately full and authoritative, while baritone Filippo Fontana is sometimes almost appropriately off-colour as the villainous Roberto. Tenor Andrew Stenson as the love interest Ernesto gives a hot and cold performance that limits his persuasiveness.

The festival chorus is in fine voice although the conductor Timothy Myers’s approach doesn’t always manage to unlock the score’s full charm or impact.

Wexford Festival Opera has been having an annus horribilis. Dress rehearsals were disrupted by Hurricane Ophelia. The opening fireworks display had to be postponed due to the weather. Power cuts caused by post-storm restoration work were an ongoing threat even after the festival opened. And Fiona Shaw’s Dr Tom Walsh Lecture had to be cancelled.

So it’s perhaps not surprising that it was only on the final first night that things got fully into gear. The composer was Franco Alfano, now remembered as the man who created the best-known version of Puccini’s Turandot, completing the work after the composer’s death in 1924.

Wexford has featured Alfano before. His most highly-regard work, La leggenda di Sakùntala, was the opera which opened Elaine Padmore’s term as artistic director in 1982. Today’s artistic director David Agler chose the early, Tolstoy-based Risurrezione, which was first heard in Turin in 1904, the year before the composer’s 30th birthday.

It would be easy to chide Alfano for the many – or, rather, far too many – ways in which his score echoes the work of Puccini. But that would be to miss the point. What it most importantly shares with Puccini is its moment by moment effectiveness on stage.

Singers get to sing in that outpouring manner that audiences love. The orchestral writing is rich and colourful. The chorus is atmospherically handled. And true love wins out in spite of dastardly male behaviour, the heroine somehow holding on to her values even in the face of a spell as a prostitute, wrongful imprisonment and exile in Siberia.

Soprano Anne Sophie Duprels’s Katiusha holds the stage and emotes with ease through all her transformations, from youthful innocence to degradation and final acceptance of her fate. Tenor Gerard Schneider’s Prince Dimitri, the agent of both her downfall and resurrection, is equally ardent, though his voice does show hints of uncertainty not unlike the momentary slipping of a clutch.

The smaller roles in a large cast are all well taken, with soprano Louise Innes’s Sofia Ivanovna and baritone Charles Rice’s Simonson standing out.

Director Rosetta Cucchi keeps the drama well focused, and that focus is keenly supported by Tiziano Santi’s sets (including a coup de théâtre at the close) and Claudia Pernigotti’s costumes. Conductor Francesco Cilluffo handles the orchestral surges with aplomb. On the opening night the audience made no secret of the fact that of 2017’s three Wexford operas this was the one they liked best, and by some margin.

Wexford Festival Opera’s engagement with Irish composers has been very slender indeed. The last time a native composer featured in one of the festival’s three main productions was in 1964, when Charles Villiers Stanford’s Much Ado About Nothing Stanford’s Much Ado About Nothing was presented. And although under current artistic director David Agler the festival has broadened its reach to include contemporary repertoire, no living Irish composer has yet featured on the festival’s main stage.

This year’s premiere of Andrew Synnott’s Dubliners in the festival’s ShortWorks series is another initiative of Opera Theatre Company.

Synnott’s career embraces the roles of conductor, arranger and accompanist as well as composer. The breadth of his reach can be gauged by the fact that he was a co-founder of Crash Ensemble back in 1997.

My image of him as a composer is of someone who is more of a follower than an individualist, but also someone who has the conviction to remain independent of the latest fashionable trends. His taste appears to be for some of the tangier but not particularly dissonant chordal developments of the earlier 20th century.

Synnott’s new Dubliners, for a cast of six with a piano quintet directed by the composer from the keyboard, is based on two stories from James Joyce’s eponymous collection, Counterparts and The Boarding House, with the texts adapted by Arthur Riordan.

Like Synnott’s first opera, Breakdown, which was heard in a concert performance by DIT students two years ago, the new work shows the sensitivity of a musician who has enriched himself through his work in the theatre.

The standout performances in Counterparts are bass-baritone Cormac Lawlor’s put-upon legal drone, Farrington, mezzo soprano Anna Jeffers’s cocky strongman Weathers and soprano Emma Nash’s colourful Mrs Delacour in the dark unwinding of man who deals with his misfortune by beating his son. And in The Boarding House there is tenor Andrew Gavin’s hapless Bob, whose fate is to be trapped into marriage by the pincer movement of a mother and daughter in the boarding house where he lodges.