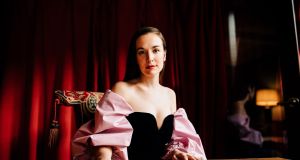 Margaret Glaspy on making Devotion: ‘I learned that I’m stronger than I think I am, sometimes.’

Margaret Glaspy is no stranger to flipping the script. Growing up in California, she was a fiddle-playing virtuoso who also played trombone; she switched to guitar in her teens and became a purveyor of both tender folk songs and thumping indie-rock tunes, as heard on her sublime 2016 debut Emotions and Math. Now? Well, her second solo album, Devotion, changes tack once again as she dabbles in electronics and quirky pop.

The 31-year-old thinks back to those early school years when she envisaged herself as a fiddle-toting virtuoso. The instrument lost its appeal when she began writing her own songs as a young teenager. “Now that I’m an adult, I see how weird it is for there to be a fiddle programme at an elementary school,” she admits, laughing. “[But] I remember very distinctly one day saying, ‘I don’t want to play the fiddle anymore’ because it didn’t really seem like a good application, once I started to come up with songs and singing; it kind of went out of style for me very quickly.”

With guitar as her chosen instrument, she moved to Boston to attend the prestigious Berklee College of Music. There, she played in a band called The Fundies with members of Lake Street Dive and bluegrass band Crooked Still. It wasn’t until she moved to New York and struck out as a solo artist proper that she truly found her own sound, however. Emotions and Math encompassed both jauntily devastating kiss-offs like You and I, and wistful ballads such as Somebody to Anybody and set Glaspy apart from her peers with her striking voice and her way with melody. She also proved her worth as a seriously talented guitarist, wielding both electric and acoustic; Wilco hotshot Nels Cline loaned her one of his after she toured with the band.

Even so, she says that it didn’t feel like a risk to make Devotion less guitar-based than its predecessor. Songs like Without Him, the sultry electro-pop of You’ve Got My Number and lead single Killing What Keeps Us Alive are all a revelation. She drew inspiration from some unlikely sources, including the outlandish work of late fashion designer Alexander McQueen.

I’ve written a lot of break-up songs, and I’ve been happily coupled all the while

“I think I was just really ready to experiment a little bit more,” she says. “I was ready to make music in a different way. While I was taking some time off from the road, life evolved in lots of different ways – and one big thing was that I just wanted to try new things, try different ways of making music. After I got off tour, I felt exhausted and a little bit done for a minute. And in that time, I suddenly asked myself ‘What’s next?’ And the thought of making something very, very different at that time was like ‘Huh. I wonder if that’s risky’. But then once I dove in, none of it felt risky at all – it was all just music.”

“I think that there’s just a different sentiment at the bottom of my lyrics now,” she agrees. “I think my music expresses a different kind of vulnerability that I didn’t really express before, so lyrically that feels like a theme for me throughout this record; it’s less about proving myself on a lyrical level, maybe. On my last record, there was kind of a sense of ‘I don’t need any help with anything, and I’ll do whatever I want’,” she recalls, laughing. “Now, I think on this record I recognise that I need help sometimes, and I don’t know everything – and there’s a certain vulnerability in that. And I think a big theme on the record lyrically, too, is to let love in, even if you don’t know what will happen. I suppose the message is kind of, face love and your fears with grace and fragility, and it’s going to be okay.”

She won’t be drawn on the particular details of the songs, or whether they’re even all about her partner, jazz musician Julian Lage. Still, lyrics such as those on Young Love (“All I wanna do is fall in love with you over and over again”) suggest that she is in a good place on that front.

“I write about a lot of different things and I generally don’t talk about my personal life. I’ve written a lot of break-up songs, and I’ve been happily coupled all the while,” she notes, laughing. “And I’ve written a lot of songs about a lot of different characters and feelings and sentiments and emotions, and I think that’s the biggest part of being a writer: you find these concepts and these hubs of humanity, then you dive in and try to portray these different situations and different feelings.”

The biggest lyrical focus on Devotion, she says, was to explore the emotional grey area of peoples’ lives. “Not grey meaning ‘boring’, but the in-between; the more dualistic times in life,” she explains. “Because I think that is what makes up the biggest part of our lives; it’s not when we’re the happiest, it’s not when we’re at the saddest, but it’s all about the in-between, when lots of different things are going on. So I’m excited to make some mythologies and stories that one can actually recognise a little bit more than just ‘I’m so in love and everything’s amazing’ or ‘I’m so sad and blue’. There’s a lot more complexity in-between. So I think that’s what the record is about, really: it’s just being earnest and sharing the genuine aspects of what life is. Just trying to traverse what life is on a real level, and not going for the low-hanging fruit of ‘sad’ or ‘happy’ and ‘love’ or ‘not in love’, etc.”

Although she has opened herself up emotionally on Devotion, Glaspy did not change her regimented writing style this time around – even though she has simultaneously been juggling a degree at Harvard University via distance learning over the past few years.

“You always have impulsive ideas; ideas hit you in lots of different ways at lots of different times,” she agrees. “You always try and document those on some level – but the ‘work’ you do is a daily thing. So this time, I think I went even a little more in the direction of being regimented. I think that that’s the best way to work. So, especially toward the end of my writing process and close to the time we were going to make the record, I wanted to get all the good that I could from it. So I wrote for about two months, and wrote from 10am-2pm, four hours a day, five days a week. And it was kind of the most magical time because you start to see through walls, and you really get focused in a different way when you’re doing it every day. So that was definitely the process for this record; just showing up, and ‘rinse and repeat to find the gems’ kind of vibe.”

As much as it may be about untangling emotions and learning to lay yourself bare, the whole process of Devotion has taught Glaspy something about herself, too. “I learned that I’m stronger than I think I am, sometimes,” she says. “I think that sense of perseverance and work ethic really brought me into this record, in a weird way. There’s lots of music in the world, y’know? And we need more but also, we have enough music to last us forever and ever already. So it puts you in an interesting place as a musician, because you have to kind of ask yourself ‘Why? Why am I making it, in that case? There’s already millions and billions of songs in the world – why do you need 12 more?’.”

She may laugh, but that sense of self-awareness is something you don’t hear from many musicians. Two albums in, and she’s got it sussed. “It also challenges you to say ‘Is it good enough? Do you like it enough? Is it enthralling enough? Do you want to live this lifestyle and have this job?’,” she adds. “You have to kind of position yourself, in a way, to say ‘This is why we need 12 more songs. It does need to be heard’.”

Devotion is released on March 27th.