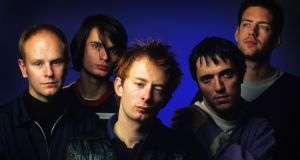 The first time Thom Yorke, Radiohead’s frontman, heard Coldplay’s song Yellow he put his head in his hands, sighed and whispered: “What have I done?” Or so goes the apocryphal story.

But what is indisputable is that Coldplay took the soggiest bits of Radiohead and parlayed them into a global stardom. It is also true that Yorke has made a face whenever invited to comment publicly on Coldplay’s debt to Radiohead. When asked by Mojo magazine in 2006 if he had “any time” for Coldplay and their kindred simperers Travis, for instance, he shot back that it’s “the choice between, you know, machine gun or pistol by, you know, execution, isn’t it?”

March 13th marks the 25th anniversary of what some – though surely not all – Radiohead fans regard as the band’s crowning moment, The Bends, an album that still stands up today. It would take a stony heart not to be swayed by My Iron Lung’s plummeting guitar hook, the crestfallen Jeff Buckley-isms of High and Dry, the forlorn expression Yorke maintains as he is pushed around a dystopian supermarket in the Fake Plastic Trees video. You’d have to be off your trolley not to like it.

Has a record ever inspired a more insipid generation of imitators? Travis, Muse, Athlete, Snow Patrol, Kodaline, Turin Brakes… We could go on. The music industry certainly did

But there is also a case that The Bends is the worst great album of all time. Has a record ever inspired a more insipid generation of imitators? Travis, Muse, Athlete, Elbow (who, okay, got better), Snow Patrol, Kodaline, Turin Brakes… We could go on. The music industry certainly did.

Yorke appeared to sense early on that his strain of high-pitched angst had the potential to go very wrong. He hadn’t even wanted to put High and Dry – which essentially invented Coldplay when Chris Martin was still studying Greek and Latin at University College London – on the album and was soon publicly distancing himself from it.

A few years later he and Radiohead’s long-standing producer Nigel Godrich had a proper falling out when the latter agreed to produce The Man Who, by Travis.

“Something would come on the radio and he’d look at me funny and I’d be like, ‘What are you so upset about?’ He’d be huffing and puffing like someone copied him,” Godrich would say of Yorke’s feelings about post-Bends “anthemic” rock. “I’d say, ‘You’re just imagining it. Look, it’s a guitar with some drums behind it. You didn’t invent that… It’s a guy singing in falsetto with an acoustic guitar.’”

All of that lay in the far future, however, when, in early 1994, Radiohead fetched up at RAK Studios, near Regent’s Park in London, where they had arranged to work John Leckie, the Stone Roses’ producer. Also present was a young engineer named Nigel who had started out at the facility helping with the tea and would eventually become Radiohead’s unofficial sixth member.

Thom Yorke and his bandmates were coming off a huge global hit with their grunge-goes-to-art-college stomper Creep. Naturally, he had never been more miserable

This has led to sold-out shows and a huge profile in the United States. Yorke had even been able to buy a house in the Oxfordshire countrywide. Naturally, he had never been more miserable.

The angst, though, unlocked something in him. Radiohead’s 1993 debut, Pablo Honey, was fine as first albums went but clogged with filler. Now songs were “pouring” out of the frontman, according to Leckie.

The issue was none of these had the potential to be a Creep 2.0. That was fine with Radiohead, less so with EMI Records.

“They were under intense pressure,” Godrich would recall. “That they had a lot of material, a lot of good songs, and they were being pushed in a certain direction. I think that maybe they didn’t want to become this sort of pop band that the label would have them be. People from the label would visit, and it got very uncomfortable.”

With the record company breathing down their necks and the young musicians in the fraught situation of having to follow a big hit, Radiohead descended into what Yorke would describe as “a total f***king meltdown” for two months. They had plenty of tunes. The difficulty was doing them justice on record.

“After those first nine weeks, every song was on the line,” Leckie would tell NME. “Creep was getting less radio play, and they didn’t have a follow-up.”

And then, late in 1994, the sainted Jeff Buckley flew into London to play at the tiny Garage venue in Islington. Yorke went along. He was blown away by Buckley’s intensity and honesty. Buckley left it all out there: he wasn’t posing or performing.

That night Yorke returned to RAK and crooned through Fake Plastic Trees twice and broke down crying. “Jeff Buckley gave me the confidence to sing falsetto,” Yorke would say in 1998.

From there it all fell into place. Or at least largely into place. Leckie was later surprised to discover Radiohead and EMI had sent several tracks to be mixed in the US by the Pablo Honey team of Sean Slade and Paul Kolderie. There were echoes of Nirvana, who similarly bemoaned the cheapening effect of success but nonetheless brought in Andy Wallace, the Slayer producer, to give Nevermind a radio-friendly polish.

“Oh, the final mixes are a bit brash,” Leckie would tell NME. “They’re kind of, ‘Zing! Look at me!’ Which I didn’t think the band wanted.” Radiohead may have been studiedly miserable. They weren’t necessarily opposed to flogging millions of albums.

The Bends, when it was released on March 13th, 1995, was hailed as an instant classic. It reached number four in the UK charts and has since then sold two million copies. Typically, though, Radiohead were already moving on. With The Bends they had made a concession to their label by putting the arguably mawkish High and Dry on the album. The next time around, recording OK Computer, they would hold firm and insist that the two most chart-friendly songs from the sessions, I Promise and Lift, were nowhere near the finished album.

“The moment you try to second guess where you’re going, you’re finished,” the band’s drummer, Phil Selway, told me a few years ago when asked to sum up this period in the group’s evolution. “With everything we’ve done with Radiohead the sense is the music has to come first. It has to be a genuine representation of where you are at that time. You build everything else on top.”