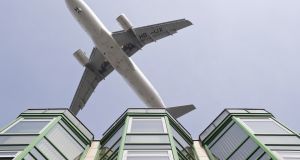 Boeing, whose 707 helped define the jet age in the 1950s, claims that today’s planes have ‘a 90 per cent smaller noise footprint area’ compared to the earlier jets. Photograph: John MacDougall/AFP/Getty Images

The statistics about noise are pretty bad. A just released European Environment Agency (EEA) report on Environmental noise in Europe suggests that long-term exposure to environmental noise “is estimated to cause 12,000 premature deaths and contribute to 48,000 new cases of ischaemic heart disease per year” in the EU.

On top of that 22 million people suffer “chronic high annoyance,” 6.5 million experience “chronic high sleep disturbance,” and 12,500 children “suffer learning impairment in school” due to aircraft noise. One in five of us lives “in areas where traffic noise levels are harmful to health”. The health impacts, says the EEA, are likely to be underestimates, because the European Noise Directive (END) does not comprehensively cover all urban areas, roads, railways and airports and because the World Health Organisation has evidence demonstrating negative health impacts at levels bellow END reporting thresholds.

I’ve never lived close to an airport, but I did live under a flight path at a time when planes made far more noise than they do now. The effect was sometimes horrendous and even the FM radio reception was affected. I later lived next door to a well-known media personality who bought his son a drum kit for Christmas. The first I knew about it was when 2FM came blasting at me through the walls, quickly followed by the teenager’s own efforts as he drummed along at a level that was even louder than the radio. Fortunately, after an initial burst it was restricted to Saturday afternoons, so I knew when not to be in the house.

Some of the worst noise-makers have actually being getting quieter over the years. In the world of trains, electric is quieter than diesel, and diesel was quieter than steam. Steam, through choo-choo, is the only one ever to have been named after its sound. The introduction of welded track also greatly reduced the noise levels, but it also removed a rhythmic pattern that composers and poets took inspiration from. Arthur Honegger’s study in momentum and tempo, Pacific 231 (the name taken from a locomotive), and the end of the 1936 GPO documentary Night Mail (words by WH Auden, music by Benjamin Britten), are unimaginable without those long-gone noise-polluting effects of steam transport. Curiously, the Argo label, which launched the recording careers of Neville Marriner and David Willcocks, was also an important maker of steam locomotive recordings.

Road traffic was once a matter of metal on stone, with horseshoes and carriage wheels with iron tyres impacting on cobbles or setts. Incredible as it may seem, part of Germany’s original autobahn network was built in the same way, and survived in use in East Germany until the 1970s. The sounds of car engines have quietened over the years, though boy racers like to turn the clock back in this regard. The differences between the engine sounds of various manufacturers have diminished, too, and the same can be said in the world of commercial aviation, though maybe there are nerds out there who can tell the difference between Boeing and Airbus, the way people could easily distinguish between Aer Lingus’s Viscounts and Friendlys in the 1960s.

Boeing, whose 707 helped define the jet age in the 1950s, claims that today’s planes have “a 90 per cent smaller noise footprint area” compared to the earlier jets. A short Boeing video comparing the take-off noise of a 707 and 737 Dreamliner can be found on YouTube. The 707, of course, is too noisy to be allowed fly today.

Today, noise cancelling headphones and earphones go a long way towards mitigating the worst of cabin noise for air travellers. And, before the development of sound cancelling technology, there were sound isolating earphones. Simply put, these are an earphone designed into an earplug. The plug keeps the noise out, and the opening in the plug where the sound transducer is fitted allows the desired sound to be heard.

The sound isolating technique was developed as ear protection from the sound levels experienced on stage by musicians at events like rock concerts. The ear plug function provides the protection, the earphone lets them gauge relative sound levels and balances as they perform. It’s probably not that widely known, but high sound levels are a health risk in classical music, too. That’s why you see perspex panels to protect players from some of the loudest instruments around them. Two years ago a orchestral viola player won a case against the Royal Opera House, Covent Garden, for “acoustic shock,” which irreparably damaged his hearing during a rehearsal of Wagner’s Die Walküre.

I know of numerous composers who suffer from tinnitus — that ringing or other sound in the ears which never shuts off. And even violinists tend to end up with hearing damage in the left ear, since that is the one closest to the sound of the instrument. It is, of course, the sounds we don’t make ourselves that we are most disturbed by. Noise from neighbours can be fatal. It is not unknown for disputes to end in murder or suicide.

When Franz Joseph Haydn visited London he found the noise so intrusive he was unable to work. He wrote to Maria Anna von Genzinger in January 1791 that in spite of being showered with honours, “I wished I could fly for a time to Vienna, to have more quiet in which to work, for the noise that the common people make as they sell their wares in the street is intolerable.” He solved the problem by moving. Yet at least three composers — Orlando Gibbons and Thomas Weelkes in the 17th century and Luciano Berio in the 20th — took musical inspiration from street noises and wrote pieces titled The Cries of London. Haydn would be less happy in today’s Austria, where urban noise exposure is greater than the UK, nearly twice as much for road noise and three times for rail. He would be better off in Ireland, which is quieter than both.