Conserving legacy of Liam O’Flynn: ‘He was like our State piper’ 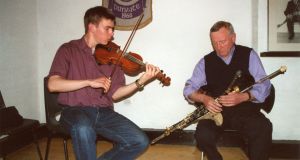 In the past, archives were seen as dusty caverns where some aspect of our past was catalogued and sat awaiting the forensic attentions of a researcher. These days, archives live and breathe in a spirit which is all about open access and dissemination: a treasure trove to be mined by anyone with a penchant for discovery.

Our Irish Traditional Music Archive (ITMA) holds and preserves the largest multimedia collection in existence dedicated to the historical and contemporary materials of Irish traditional song, music and dance.

Already bursting its seams in its home on Merrion Square, the archive has made its name as a centre for meticulous scholarship, precise cataloguing and an enviable online presence that renders it as easy to find a tune for musicians in Kyoto or Ulan Bator as it would be for those in Killeshandra or Urlingford.

The passing of the piper Liam O’Flynn two years ago left a gaping hole in the tradition, such was the man’s enormous influence. His work as a solo piper along with his membership of Planxty, his ground breaking collaboration with Shaun Davey on The Brendan Voyage and his deep friendship with the late Seamus Ennis all added up to a musician whose appetite for adventure was equalled only by his penchant for precision.

Liam O’Flynn’s legacy lives on in his many recordings and in the memories of those lucky enough to have played with him. But it flourishes too in the playing of those musicians who inherited his pipes and in the magnificent legacy he has left to the Irish Traditional Music Archives: a multimedia collection of published books and periodicals, commercial and non-commercial sound and video recordings, photographs, original music scores, correspondence, newspaper clippings, reviews, business related papers (contracts etc) and research notes.

The collection was kindly donated to the archive by Jane O’Flynn, Liam’s widow. Chief among its many treasures are two tunes composed by Liam, which nobody has previously heard.

Maeve Gebruers is the archivist lucky enough to be overseeing the cataloguing of O’Flynn’s priceless bequest. To see a handwritten score for The Brendan Voyage in all its well-thumbed glory is to feel like you’ve taken a step closer to the man as well as the musician.

“We’re still working through this collection”, Maeve admits, gesturing to the 18 boxes that contain O’Flynn’s bequest. “This is his working copy of The Brendan Voyage. You can see how well used it is, and you can see a lot of marginalia where Liam has written notes for himself. I’m guessing that this [handwritten score] must be Shaun Davey’s hand.”

In the midst of this collection lie countless programmes for state events.

“Liam was like our State piper”, Maeve muses with a smile. “He’s played at all kinds of wonderful places on behalf of the government down through the years, and there are lovely personal messages from both Martin and Mary McAleese about his beautiful playing at various State functions. And of course he composed a piece, An Droichead/The Bridge, for President McAleese for her inauguration.”

The meticulousness with which Liam O’Flynn curated his bequest to ITMA means that their archivists were able to hit the ground running. In so many ways, artists’ catalogues closely reflect their personalities.

Liam O’Connor, director of the Irish Traditional Music Archive, and himself a fiddle player of much renown had the privilege of playing with O’Flynn on a number of occasions. He marvels at the diversity of bequests ITMA is lucky enough to welcome into its gargantuan fold.

“Think Francis Bacon’s studio!’, he quips, when comparing O’Flynn’s catalogue to those of some musicians whose collection they’ve catalogued.

“Everything is in crisp manila folders, with titles on them”, she notes. “I think it’s a mark of the man. He was very meticulous.”

The collection includes two tunes known to have been composed by Liam: An Droichead and Sunset, but the discovery of two further original compositions, The Return of the Pedalboard and The Piper’s Stone, will intrigue many.

Both would have been likely to be played at some or all of the three concerts titled the Liam O’Flynn Series which ITMA had planned in collaboration with The Arts Council and the National Concert Hall. Unfortunately, due to the coronavirus shutdown, they will not now take place.

“His compositions indicate that humble side of him: he didn’t announce them to the world”, Liam O’Connor notes. “The Return of the Pedal Board is about Arty McGlynn’s missing musical instrument that’s quite humorous. I’m not even sure whether Arty himself was aware of this tune either before he passed away. And for us, we would love to hear them played.”

Reviewing some of Liam’s own musings about music and his scrupulous notes for impending concerts, there’s further evidence of a musician whose attention to detail was forensic. Here is what Liam wrote about The return of the pedalboard:

“This tune concerns a cantankerous and unpredictable piece of electronic equipment which belongs to that great musician and friend, Arty McGlynn. On more than one occasion on stage it has caused its owner great distress and the rest of us great amusement. So when it went missing after a trip abroad all seemed safe and well. But, unbelievably, it appeared soon after – delivered safely home by a returning musician. A new tune seemed the only response!”

“It’s more evidence of the same artist I knew”, Liam O’Connor says. “He was thoroughly prepared and thoroughly professional. His set lists are there, along with the prompts for what he would say. He was very humble, and had great respect for tradition. He wrote a lovely tribute to Leo Rowsome, who taught him the pipes, and made his pipes. If there was no Leo Rowsome, we mightn’t have had any Liam O’Flynn or Paddy Moloney or The Pipers Club.”

Liam’s writings tell us so much about the man, as O’Connor attests.

“Liam was very sparse with his words”, O’Connor recalls, “and sometimes he wrote a number of times about the same topic, but with similar language each time: the same precise variations, which is what he was like when he was playing music as well. That’s how I remember playing with him too: there was always a plan. Whatever experiment had happened, it would have happened well in advance of the performance.”

And there’s the detective work that’s so central to the archiving process too, as Alan Woods, sound archivist explains, smiling wryly.

“For example, there might be a recording with no names”, Alan explains, “and all of a sudden in the middle of a set someone will shout ‘Good man Mick!’ and you’re trying to figure out: right, it’s in Clare in the early 60s, were there any flute players called Mick? Then you’re ringing around anyone in the know, to try to narrow it down.”

“Philosophically, we want to make it as public as possible”, Liam O’Connor insists. “Liam’s tunes have been given to the musicians, and that’s the rarest of the material. It’s a continuation of his legacy. Where we can, we want to make them available to the public. They won’t be under lock and key.”

“We want to celebrate the collection itself, and Liam, and everything he stood for”, O’Connor declares. “This is really something special. It’s rare that you get such an insight into an artist where he’s reflecting on his own influences, and in such an organised and thorough way. Liam was such a central figure in the tradition. Ultimately it’s about connecting with the living tradition. Connecting artists with inspiring material.”

And the last word can only be left to Liam O’Flynn, whose written musings on music will resonate deeply for anyone with an ear for a tune.

“Hearing Willie Clancy for the first time gave me feelings I’d never experienced before. I think I then realised that music is something you listen to, but something you experience: feelings that stir the soul. Music making that reflects the soul.”