Organiser Melvin Benn ‘not worried’ about coronavirus ‘at all. I’m full steam ahead’ 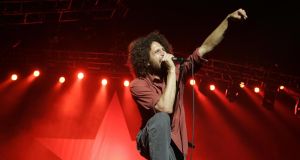 Electric Picnic 2020: Zack de la Rocha of Rage Against the Machine, who are to headline the festival. Photograph: Dara Mac Dónaill

Rage Against the Machine, Snow Patrol and The Chemical Brothers have been announced as the headliners for Electric Picnic 2020.

The Irish band Picture This and the Scottish singer Lewis Capaldi have also been confirmed for the music festival, which takes place between September 4th and 6th in Stradbally, Co Laois.

The Irish DJ Annie Mac, the Belfast electronic duo Bicep, the Oxford band Foals, the Stone Roses lead singer Ian Brown and the Irish singer-songwriter James Vincent McMorrow have also been confirmed for the sold-out festival, along with the 1980s soul singer Rick Astley, the English singer-songwriter Mabel, the American hip-hop supergroup Run the Jewels and the British rapper Skepta.

Melvin Benn of Festival Republic, which runs Electric Picnic, describes the line-up as “incredible, with five headliners” over three nights. “If you start looking through the body of the bill and the up-and-coming acts such as Lyra, beabadoobee and Saint Sister, I think it’s brilliant,” he says.

Benn acknowledges that the headline acts are all male but says no female headliner is touring this summer. “We are completely committed to bringing women through all of the line-ups, but there is not a gender-balance ability across the headliners generally at the moment.”

He also says he does not expect to have to postpone or cancel Electric Picnic because of coronavirus. “I’m not worried about it at all. I’m full steam ahead unless the governments here and in the UK say we can’t go ahead... I’m 100 per cent of the belief that by June we will all be over the hump and we will all have forgotten about it, quite frankly, and all you buggers” – the media – “will find something else to write about it.

“At this point in time I have got nothing in my head other than planning for this festival to take place at the time it will take place. When you put it in perspective about the number of people that could be seriously hurt, I think it has been whipped up a little bit, but it’s a great news story.

“The reality is that, for me, I’m about providing entertainment outdoors until somebody forces me to stop.”

ILFDublin 2020: one for the books
Real news has value SUBSCRIBE