Lewis Capaldi in Dublin: ‘My music attracts a lot of lonely b*st*rds’

One minute it’s a comedy gig, the next he’s singing pained songs with eyes closed. And it works 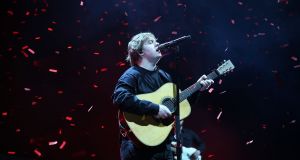 Lewis Capaldi in concert at the 3Arena in Dublin on Sunday night. Photograph: Nick Bradshaw for The Irish Times

Fame moves fast. In the space of three years, Lewis Capaldi has gone from zero to zeitgeist with barely enough time for music fans to catch up. With a slew of chart-dominating singles, one hit debut album with multiple extended releases and viral tweets a-plenty, the pace may seem unmanageable but in Dublin tonight, the Glaswegian is taking it in his stride.

Pummelling his heartache for every last drop on 2019’s Divinely Uninspired to a Hellish Extent, the 23-year-old has earned a fair few shillings from his tears, and while the songs are undeniably downbeat, Capaldi’s demeanour is forever chipper. Not just laughing his way to the bank, he’s laughing to play off the sadness of his songs.

If he’s not swinging bottles of Buckfast onstage as he picks up the Brit Award for Best Song, he’s impersonating Noel Gallagher at Glastonbury while wearing a T-shirt with Gallagher’s face in a love heart as retaliation to the Oasis frontman describing his music as “f**king wank”.

He strikes the balance between sadness and entertainment while his peers act like misery merchants between every brokenhearted ballad.

It’s this balance that makes him a bit of an anomaly. If his music bores you, at least he brings you value in other ways.

The concert begins with a video clip of Capaldi losing out to Billie Eilish’s Bad Guy for Best Pop Song at this year’s Grammy Awards. Words like loser and virgin and failure are written across his face in comic sans before he cracks into Grace. That’s how he makes his way through this new level of fame: he makes jokes at his own and the music industry’s expense.

He’s the ordinary guy living the dream and he makes this madness as relatable as possible. It feels like you could have a drink with him or befriend him at a festival.

The first of two sold out nights in the 3Arena, he reminds the crowd that that’s 13,000 people a night. “I’m f**king rich,” he chirps in his thick Glasgow brogue, referring to himself as a cash cow .

It’s part concert, part stand up comedy show. He informs us that he has “the sh*ts” and if anyone goes home with that tonight, it’s better than the coronavirus. “Just wash your f**king hands,” he advises, “and don’t put your fingers in anyone’s mouth”.

But back to the sadness. It is this that unites him with his audience, an audience of every age, gender and relationship status that has simultaneously kept at least three of his singles in the Irish charts over the course of the last 18 months.

He sings pained lyrics like “I let my guard down and then you pulled the rug, I was getting kinda used to being someone you loved” with closed eyes and clenched fists. The audience’s phones record every potentially viral moment. Some people need music like this to guide them through life.

“I’ve learned that my music attracts a lot of lonely b*st*rds,” he says before introducing One, a ballad that thanks ex-boyfriends for making the mistakes that led the girl to him. He then requests that all the lonely b*st*rds boo the many loved-up couples in the crowd.

Despite his troubling bowel movements, his voice is rich, soulful and strong. Having previously supported Sam Smith, Niall Horan and Bastille, Capaldi is on his first headlining tour and is already outrunning each of those acts in star power and seemingly unstoppable success.

Between performing the closing stadium level ballads Before You Go and Someone You Loved, he reflects on the whirlwind that his life has become. Despite the Grammys he has won, the Gallagher feuds and all the money ... something is keeping Lewis Capaldi grounded during all of this. And that’s possibly the most fascinating thing about him.

This apparently ordinary guy is proving to be anything but.