The show must go online: How venues are keeping the music alive

Covid-19 has shut concert halls and productions, but you can watch safely on the web 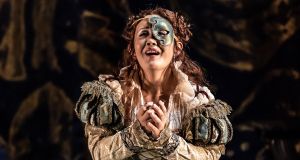 Yasko Sato as Teodora in Il Bravo by Mercadante, at Wexford Festival Opera in 2018, can be viewed on YouTube. Photograph: Clive Barda/ArenaPAL

Never waste a good crisis, the saying goes. And, in the self-isolating conditions of the Covid-19 pandemic, it’s a message that the world of music and opera is taking to heart.

There is, of course, a lot of bad news. The shutdown of concert halls, opera houses and theatres is already well under way. And it’s only likely to escalate as countries try to cope with this new (to humans) and deadly disease.

The musical losses in Ireland are already substantial. The National Concert Hall is dark. Irish National Opera’s production of Carmen has been cancelled, as has the Feis Ceoil, due to start on Monday 23rd. And the Irish Chamber Orchestra’s 50th birthday celebrations have been disrupted.

And if the less-optimistic projections about the duration of the pandemic turn out to be correct, the precautions against the spread of the virus could still be in place after the summer or even beyond. A lot of people of all generations, whether working or not, are going to be spending enforced time at home.

Major international performing institutions have already taken up the immediate challenge by freeing up access to their online output.

Both halls of the Philharmonie in Berlin, home of the Berlin Philharmonic, have had to close until April 19th. But the orchestra is setting out to increase its online reach. The home page of digitalconcerthall.com, its platform for streamed concerts, sets the tone. “The Digital Concert Hall, now free for everyone,” it declares. “The Philharmonie is now closed – so we will come to you!” There’s a voucher code offering free access to all of the site’s concerts and films until March 31st.

Not every institution is offering unfettered access. New York’s Metropolitan Opera, whose live performances are on hold until March 31st, is presenting free, nightly streams, each of which will be available for 20 hours on metopera.org. Wednesday night’s Il Trovatore from October 2015 features Anna Netrebko and the late Dmitri Hvorostvsky; tomorrow’s La Traviata from December 2018 stars Diana Damrau and Juan Diego Flórez.

One of the casualties of the cancellations has been the Met’s production of Rossini’s La Cenerentola, with Tara Erraught in the title role. The opening night was to have been last Thursday, with the last performance on Friday April 3rd.

The Staatsoper in Vienna (wiener-staatsoper.at), where everything has been cancelled up to Thursday April 2nd, is using its previously recorded material to stay as close as possible to the current season’s advertised repertoire. This means there will be a complete Wagner Ring cycle on offer, with Ádám Fischer and Simon Rattle (Wednesday afternoon’s Die Walküre) among the conductors. The Vienna streams will be available for 24 hours.

Irish National Opera (INO) may have lost Carmen, but the company’s home page, irishnationalopera.ie, has links to two productions that can be viewed online for free: Rossini’s La Cenerentola with Tara Erraught (shortlisted for Best Production in the Irish Times Irish Theatre Awards) and Puccini’s Madama Butterfly, with Celine Byrne. The Big Bang!, the gala concert for the company’s launch in 2018, with its all-Irish lineup of singers, is available on YouTube, as are performances by the two companies that merged to create INO – Rossini’s The Barber of Seville (from Wide Open Opera, with Tara Erraught and Gavan Ring), and Robert O’Dwyer’s Eithne (Opera Theatre Company’s concert performance reviving a landmark early 20th-century opera in the Irish language).

YouTube also has a range of performances by the RTÉ orchestras, including a number featuring principal conductor Jaime Martín, and the orchestra has created a a selection of 20 tracks from the orchestra’s commercial recordings on Spotify.

The long-term damage to musical life from the Covid-19 pandemic is hard to predict. The permanent, salaried staff of the great institutions are the best protected, and freelance performers among the most vulnerable. There are musicians who have already seen their diaries empty of a couple of months’ work. And bear a special thought for opera singers, whose contracts are structured so that they are not paid for rehearsals, only for performances. When first nights are cancelled, opera companies are not obliged to fork out for any of the work already done.

One bright spot has been the response of the Arts Council. The message, as relayed by Minister for Culture Josepha Madigan, is sympathetic and pretty comprehensive. “Organisations and individuals currently funded under the Arts Council Strategic Funding, Arts Centre Funding, Arts Grant Funding and Festival Investment Scheme Round 1 have been advised that the Arts Council will honour all funding commitments that have been made to them and that there will be no financial penalties for organisations/individuals that are unable to deliver key activities/key services arising from the impact of the Covid-19 virus.

“Organisations that may face cash-flow challenges during this time will be able to draw down up to 90 per cent of their Arts Council funding commitment, with immediate effect. This should, in turn, assist them in honouring immediate financial commitments. Organisations are asked to prioritise commitments to artists – as this is at particularly challenging time for them.”