I’m in the mood for oud: this week’s best jazz gigs 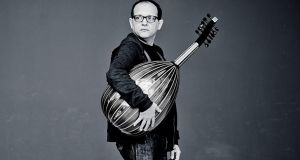 Tunisian oud master Anouar Brahem weaves different threads of Arabic and Mediterranean music into a new and lustrous material that moves far beyond the tired old “world music” trope. His instrument, an ancestor of the lute and the guitar, has been the central instrument of Arabic music since the middle ages, and Brahem is rightly regarded as an innovator in what is an ancient and often change-resistant tradition. But, for all Brahem’s talent and reputation (he has been recording with the prestigious ECM label since the early 1990s), attention here will also focus on the oudist’s heavyweight companions, three major figures of the contemporary international jazz scene: free-spirited UK pianist Django Bates, innovative New York drummer Nasheet Waits and, above all, the revered English bassist and bandleader Dave Holland.

Vocalist Honor Heffernan’s gloriously arch celebration of the wit and wisdom of Dorothy Parker played to adoring audiences in New York a couple of years ago, and the album of the same name, released in 2017, was another triumph in the talented singer’s varied career. With original music by ex-Auto Da Fé keyboardist Trevor Knight, Whistling Girl blends Roxy Music and Rocky Horror with Weimar cabaret and 80s synthpop without ever sounding derivative or dated. The best way to experience this darkly witty show is live, and here is that rarest of musical occurrences – a five-show run (with even a Saturday matinee thrown in) – whereat to do just that.

Guitarist Chris Guilfoyle’s Umbra quintet is one of the more coherent and consistent jazz groups on the contemporary Irish scene, a long-standing alliance of new-generation players galvanised by a leader with energy and vision. Over the last couple of years, the group has released an excellent debut album, West, and collaborated with major international names like singer Theo Bleckmann and trombonist Nils Wogram. Guilfoyle’s math-rock-meets-downtown compositions have a strong flavour of their own, but they leave plenty of room too for his talented companions – saxophonists Chris Engel and Sam Comerford, bassist Barry Donohue and drummer Matthew Jacobson – to stretch out into that magical space where the lines between the written and the spontaneous are blurred and no one cares what the resulting new music is called.

Though originally from Dublin, singer Christine Tobin has been based abroad for so long now – initially in London and latterly in New York – that she’s not as well known on this island as she should be. Feted by international critics for her highly original songwriting as well as her singing (the Guardian says she deserves a place alongside “fellow troubadours Cave, Mitchell and Cohen”), Tobin has recently been taking the New York scene by storm. Her partner – in life and on stage – is the much-respected London guitarist Phil Robson of The Partisans, and this impromptu duo appearance at the Sofa Sessions in Billy Byrne’s, Kilkenny is a rare chance these days to hear the pair outside the island of Manhattan.