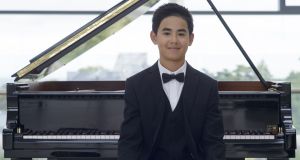 Joe O’Grady will play at the Emily Anderson Memorial Concerts

Music for Galway holds an annual concert in memory of Galway woman Emily Anderson. In the 1930s she made what has become the standard translation of the letters of Mozart, and her translation of the letters of Beethoven was published in 1961, the year before her death at the age of 71. This year’s concert gives a platform to young Irish pianist Joe O’Grady, in Beethoven’s Pathétique Sonata. And the experienced violin and piano duo of New Zealander Benjamin Baker and Hungarian Daniel Lebhardt complete the programme with sonatas by Mozart (K304 and K380) and Beethoven (the stormy Sonata in C minor, Op. 30 No 2).

The golden era for French orchestral music in Ireland was the late 1940s when Jean Martinon was the conductor of what was then the Radio Éireann Symphony Orchestra. All-French programmes have long since faded from prominence in Dublin, but the RTÉ NSO’s principal guest conductor, Nathalie Stutzmann, currently the most popular musician working regularly with the orchestra, is offering one that’s about as sure-fire as you could get. She’s coupling the suites from Bizet’s L’Arlésienne and Carmen with Ravel’s Bolero.

The Ulster Orchestra’s outgoing principal conductor, Rafael Payare, is going through some large-scale repertoire during his final season, repertoire that requires a strength of numbers that is well beyond the orchestra’s norm. The last of three concerts pairing Richard Strauss and Dmitri Shostakovich offer the former’s Also sprach Zarathustra and the latter’s war-time Leningrad Symphony.

Mary Trump: How my family created the world’s most dangerous man
6

Michaela Coel on sexual assault: My friends’ stories made me realise I was far from alone
7

Tom Hanks on Covid-19: ‘I had crippling body aches, was fatigued all the time and couldn’t concentrate’
9 Welcome to the child sex capital of Europe
10