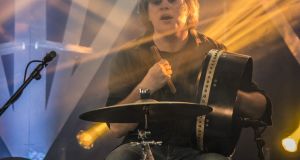 We are our stories. To be human is to have a story to tell. This year’s St Patrick’s Festival takes our indigenous love of and facility for storytelling and pokes it, prods it, and turns it inside out. Across a diverse programme of events, our ongoing affair with the fine art of telling a story will be celebrated and explored by street artists, poets, actors and singers alike.

Karen Walshe, the festival’s artistic director, is adamant that her chosen theme of storytelling will resonate among locals and visitors alike.

“I want visitors to get a true idea of who we are,” she enthuses at the end of another busy day spent refining the festival programme in advance of the event’s curtain opener: a tour of Marsh’s Library on March 14th. “I feel they’ll get that through the Irish cultural programme, and I feel that the local audience will be able to see the wealth of deep knowledge and connection with our traditions and how they’re being kept alive by artists like Cormac Begley, Lisa O’Neill and Radie Peat. There’s been a huge surge over the last few years from younger musicians coming up through the ranks and I feel it’s very powerful, and it’s really exciting.”

Macdara Yeates is a man with a particular fascination with our storytelling tradition, and its close ties to our singing tradition. He’s consequently bringing together storytellers, singers, and actors for this year’s festival under the umbrella of a diverse programme he’s called Abair. In the Irish language, abair means both “to say” and “to sing”. It’s a fitting title that encapsulates the spirit of what he’s trying to do. As a member of contemporary traditional band Skipper’s Alley, he’s had the chance to view our traditions from near and afar, as the band toured extensively.

“Through my years of travelling different parts of the world I found the oral traditions in their raw form pretty underrepresented in the festival circuit,” he remarks, “so I took this opportunity to right that wrong in some small way.”

Yeates sounds like he’s on a mission to bridge the gap that currently exists between storytellers and singers. For him, this is a false sundering of what in the past was a very natural connection between our songs and our stories.

“If you go back far enough you realise that there really isn’t much of a difference between a singer and a storyteller,” he suggests. “The great singers were also great storytellers, even though they wouldn’t have considered themselves storytellers in the formal sense. Many of their songs, in the singing of them, involved a great amount of storytelling, so I think that the two are basically one and the same.”

“I think it’s only a recent development that they’ve occupied such different spaces,” Yeates continues. “There’s a monthly storytelling gathering in the Teachers Club which is completely separate to An Góilín [a traditional singing club at the same venue], and, to my mind, they would be better put together. I think that particularly as they relate to the folk tradition, they’re birds of a feather.”

Yeates’s Abair programme will seek out punters who have an ear for a good story and a taste for a great song, with both of these elements celebrated in tandem at events in the unlikeliest of venues, from a tenement dwelling on Henrietta Street to Glasnevin Cemetery, the Dublin Writers’ Museum and The Cobblestone pub.

“Abair is an exploration of our oral traditions in a bunch of different forms,” Yeates explains, and his programme is as broad as it is long. “So we have curated concerts, a song, poetry and storytelling tour, a bunch of ballad tours by an amazing bard by the name of Seán Fitzgerald who’s a storyteller, a mummer, actor and a singer, and there’s also a bunch of pub sessions. Seán’s got this interactive, funny, surreal tour of Dublin that’ll take you up to Handel’s music hall and St Werburgh’s Church. It’s really a very different view of Dublin.”

Emigration, both past and present, is another focus of the Abair programme. On Saturday Yeates will be performing at the EPIC Emigration Museum at CHQ, in an event titled Gnás – Thousands Are Sailing.

“In Ireland over recent years, emigration has had such a massive impact,” Yeates notes. “And it’s been a big fascination of mine, as it appears in the song tradition. It’s something I’ve always been drawn to. So I’ll be looking at different chapters of Irish life: looking at youth and adolescence, and progressing to entering the workforce and then an eventual chapter on emigration. So the idea is that through the whole programme, you’ll get a chapter on every aspect of the Irish experience as it appears in those songs.”

Our fascination with songs and storytelling is manifested in the recent successes of bands such as Lankum, Landless and Ye Vagabonds, all of whom have been mining our oral traditions and interpreting them anew for a whole new generation. Yeates has noticed this with no small amount of delight.

“Bizarrely, singing and storytelling, traditionally, tend to appeal to people in the age bracket of 60-plus,” he remarks, “but over the last five years, what was this very niche thing has found a mainstream audience abroad and in Ireland.”

Cormac Begley is another musician who’s fired up at the prospect of collaborating with fellow musicians, singers and poets, all of whom bring something different to the mix. On Thursday he’ll be performing with Liam Ó Maonlaí, Lisa O’Neill, Stephen James Smith and Libby McCrohan, and in conversation with Donal Dineen, at the Pepper Canister Church.

“I think it’s a very rare thing to find musicians who you can communicate with on a certain level,” Begley offers, reflecting on the magic that can happen when the sparks ignite in a live setting. “It’s like any relationship. So when you know you know, and when it works, it really works. Sometimes you can fully respect someone’s music but when you play together, it just doesn’t work on some level. But I love that communication when it does happen.”

Begley is a musician who’s reframed our perception of what the concertina is capable of, playing, as he does, the baritone, bass, treble and piccolo concertinas. Remarkably, his explorations of this seemingly modest instrument have given him access to the entire seven octaves, something more usually associated with the piano. This spirit of adventure is clearly evident in his collaborations too.

“Sometimes you might just get tired of your own playing, you know,” he offers. “I’ve been very lucky in playing with the people I’ve played with because it makes you step up. It’s like setting a bar for yourself: you’re always learning. I’ve learned so much from so many different people, and that goes way beyond the music. Getting to know people, and getting to hear about their outlook on life. What they experience in their playing, what they think about, where they go when they play. They’re very open to having those conversations and they’re very thoughtful and have a purpose.”

Karen Walshe is optimistic that the artistic programme of this year’s festival will leave a tangible legacy.

“It’s connecting the old with the new through this overarching theme of storytelling,” she says, “and keeping those stories alive. By placing the events in venues that resonate with the songs, we’re helping to keep an old tradition fresh: passing on the skills through the generations. That’s what will keep the audiences coming.”

History buffs, contemporary music fans, poetry aficionados, and those who get their kicks from songs and storytelling will all find something worthwhile in Dublin city centre during the St Patrick’s Festival.

On Thursday morning, Pat Liddy’s St Patrick-themed walking tour will mine Dublin’s pre-Viking history, while photographer Eamonn Doyle has an expansive exhibition at the Royal Hibernian Academy. On Saturday, Sing Out Loud: A Choral Trail of the City will see intergenerational choral groups performing at Dublin’s most celebrated landmarks.

Tonie Walsh will lead a Lavender Walk tour through historic gay Dublin on Saturday at lunchtime, and of course there’s the Céilí Mór on Merrion Square at 1pm, also on Saturday.

The St Patrick’s Festival parade departs Parnell Square on St Patrick’s Day at high noon, and then there’s the City at Play funfair on Custom House Quay throughout the weekend . . .

Don McCullin: Photographs you can’t look away from