Nuxsense: An immigrant hip-hop dream is coming true in Dublin

The members of the hip-hop collective cover Africa, Asia, South America and Europe 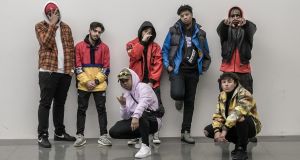 Nuxsense: ‘I don’t think we’ll ever break whether the music continues or not. Us as brothers, we are solidified’

In Yamamori Tengu – a small venue above the striking sushi restaurant on Ormand Quay in Dublin – Nuxsense attack their performance like a lumbering colossus. Here is a collective smothered in their own original myth: a local rap group who define a new strand of the capital’s youth culture. There are two sides to this behemoth. Nuxsense – rappers Luthorist, Jehnova, Al-I, Prophet Goon, Rem$, Bogzy, plus beatmaker Sivv – will scorch a stage like it is doused in kerosene one night and create a gorgeous brand of soul-noir hip-hop you can vibe out to the next.

The crew has assembled tonight to launch Luthorist’s solo album, Hueco Mundo, a glorious set of muted beats and tranquil rhymes that conjures foggy images of rain-streaked streets in neon-lit cities. The backdrop is a room decorated with a patchwork of iconography. There are Buddhist statues and glittering disco balls; Japanese lanterns and a curious sign that reads “No Dancing”. This mesh of different cultural symbols almost serves as a microcosm for the group itself. The backgrounds of the various members of Nuxsense cover Africa, Asia, South America and Europe, alchemising in Dublin. They started out as school kids united by a passion for music and their shared immigrant experience. Now they encapsulate the multicultural make-up of the city’s youth and how that pluralism can be funnelled into phenomenal art.

We’re still growing, we’re learning as we go, just trying to do everything ourselves

“In school it was always like the foreign corner and the Irish corner,” the affable Bogzy, who is of Romanian heritage, says as various accomplices help prepare Yamamori Tengu for the show. “So people were making their own connections in school.”

“We were good with everyone,” adds the Brazil-born Luthorist. “We didn’t separate or segregate. But you have more of a connection with someone who is from outside, because they know what you’ve been through. They know you’ve come from another country and they know how it is, you know what I mean? So I feel like you instantly connect more. But we have loads of Irish friends.”

Luthorist and Al-I both went to St Joseph’s College in Fairview and started rapping together from an early age. “I’ve never been in the same school for more than two years,” says Al-I, the only member of the collective born in Ireland. A roving childhood saw him grew up in places as diverse as Egypt, Qatar and Mullingar. “When I was in Joey’s, it just kind of clicked.”

Luthorist and Al-I already knew Prophet Goon and Bogzy from school. Destiny brought them together with Jehnova and Rem$ (formerly known as Yung Pe$o) when the two factions met on a multi-school trip to Cavan organised for students from foreign backgrounds. The excursion was ostensibly arranged to bring together kids with similar stories to tell.

“That’s not what we talked about when we linked up, though,” says Jehnova. “The first time we linked up, all we did was talk about rap music, [girls], stupid shit. We just liked the same shit; that’s why we linked up.”

The clique spent time hanging around Herbert Park and Central Bank – haunts that are great for doing nothing when you’re young. Cousins Jehnova and Sivv, who both come from a South African background, dabbled in skateboarding. Rap music, though, was the group’s passion, and so Nuxsense was born. Sivv wasn’t officially added to the crew until later, with Bogzy the last to officially join.

As recording artists Nuxsense have been content to drop loose tracks here and there. It’s a challenge for a seven-man collective to find the time to create art when there’s work and education to balance. And so Luthorist decided not to wait around. Recording without any grand plan, he produced a collection of tracks that now form the album Hueco Mundo.

“I never really wanted to stop making music,” says Luthorist. “The first half of the album is just a collection of tracks I’d already recorded and wanted to do something with it. The second half are new tracks that I was like, ‘Okay, this is a project, now I’m going to make things properly’.”

Creating Nuxsense’s sonic template is Sivv, who produced every track on Hueco Mundo. His style is singular: crisp drum snares, heavily manipulated samples, trancey synth-whooshes and the occasional familiar mobile phone bleep – one of his odd signatures. Listening to his spaced-out orchestration is like trying to remember a dream.

“He knows exactly what I’m looking for in terms of mixing,” says Luthorist of Sivv. “Obviously, we’re in the same group so he definitely knows how to do it. It would be different for me going to someone else and doing it with them because it wouldn’t sound the way I’d want it to sound. We’re still growing, we’re learning as we go, just trying to do everything ourselves.”

I don’t think we’ll ever break whether the music continues or not. Us as brothers, we are solidified

Behind the music is a close fellowship. Nuxsense are seven young souls spiritually connected to half the planet, all bonded together by common denominators in their individual stories. These are immigrant tales as old as human history. In this case, they’re set to a booming beat.

“It’s us first,” says Bogzy, a young man with an infectious appetite for life. He’ll later tell me of the pain of being separated from his grandparents in Romania – the torment of the expat – but the joy of building his life in Ireland. So central to this zeal is his relationship with a clique of like-minded friends he calls his “brothers”.

“Nuxsense, I don’t think we’ll ever break whether the music continues or not. Us as brothers, we are solidified. We’ve been growing together. We’ve been growing mentally. Every challenge we face I feel like we can come across it together. It’s good to see that you have support from your brothers. You learn different things when you’re in a group like this because it’s based on trust.”