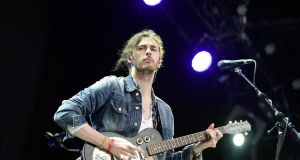 Hozier: new single ‘Movement’ is out now with an album to follow in 2019. Photograph: Bertrand Guay/AFP/Getty Images

A bearded figure, glum and voguishly dishevelled, alights from a van and slouches towards a warehouse. He is tall, tortured and his long hair unquestionably has the makings of a rudimentary man-bun. Welcome back Hozier!

But wait – is that really Hozier? As the video to his just-released new single Movement begins, fans of the Co Wicklow bluesman could be forgiven for thinking their hero, whose previous promos have starred Natalie Dormer and Saoirse Ronan, was for once hogging the spotlight.

As it turns out, however, the tousled moocher is actually badboy ballet dancer Sergei Polunin, who ascended to overnight infamy in 2012 by quitting London’s Royal Ballet a week before he was due to appear on stage.

This is confusing. Does the pirouetting Polunin just happen to look a bit like Hozier? Are we supposed to think he is Hozier? Is it possible nobody involved in the film, directed by Ikea commercial regulars Chris Barrett and Luke Taylor, was struck by the resemblance?

Still, judged as a pop video rather than an uncanny game of double-identity, the work is both gritty and powerful. Hozier said he wanted to collaborate with the Ukrainian dancer since seeing him perform to his music in a piece choreographed by David LaChapelle.

The same cannot said of the accompanying song, which Hozier fans might judge a slightly retrograde step after the by turns epic and raw comeback EP Nina Cried Power (already streamed 25 million times on Spotify and handing a first US number one to Mavis Staples, with whom Hozier duets).

Hoizer’s difficulty, it’s becoming clear, is that while he is adroit at writing anthems that address grand themes – the loss of faith in Take Me To Church, the struggle for equality and empowerment in Nina Cried Power – when it comes to going gooey and personal, he doesn’t commit with the same ferocity.

Movement belongs to this second category – the problematic Hozier love ballad. “So move me baby,” he sings. “Shake like the bough of the willow tree/ You do it naturally/ Move me baby.” He’s tripped up previously with the unintentionally chilling 2014 album low-point Someone New which – and this is not the first time the point has been made – essentially sounds like James Blunt’s Your Beautiful in dire need of a haircut.

The new track isn’t nearly so terrible, but nor is it Hozier at his finest. The sentiments are sappy and the lyrical evocation of Jonah, Atlas and erm… Fred Astaire carries the whiff of overreach.

As everyone from Abba to the Beatles will attest, love songs work best when abiding to that philosophy that less is more or when mixing the bitter and the sweet. Movement leans instead into bombast and though the chorus is ground-quaking – your heart genuinely does swell as it swoops in that final time – it does rather sound like Hozier unleashing the Celine Dion within.

The good news is that his just announced second album – untitled and due at an unspecified date in 2019 – is likely to blend both his more agreeably strident music and the ickier love dirges.

That will hopefully be enough to spare Hozier a backlash. There are already indications that second time around he may not bask in quite as much love as that showered upon in on first arrival. One of the few UK press reviews of his comeback gig at Koko in London in September provided glimpses of the cattiness that might be coming his way.

“There’s a hokeyness, an on-rails tameness to his band’s rocking out that fails to convince,” wrote the Guardian, lamenting the “whiff of dad jeans to the workmanlike blues rock platitudes”. The review went on to compare Hozier to Wet Wet Wet which, aside from the fact both he and Marti Pellow have lovely curls, seemed cruel.

Hozier agnostics are unlikely to be made see the errors of the ways by Movement. Where Nina Cried Power was soulful and urgent, the follow-up is exactly how you imagine a Hozier comeback single to sound.

Second albums are rarely easy but one of the worst offences the returning artist can commit is to be predictable. Hozier, who plays across Ireland in December following an American tour, no doubt has another trick in store – or so devotees will hope. Movement, alas, is somewhat of a plodder.

‘Hey, faggot!’: Gavin McCrea on a lifetime of homophobic abuse and violence
10