Hozier EP review: After four years, he needed to blow us away. He does 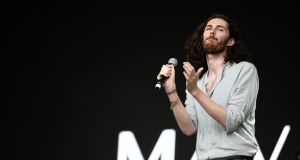 Andrew Hozier-Byrne is at his best when dealing in supersized emotions, belting his heart out in that earnest, ever-so-slightly overwrought voice while his music promises to move mountains.

Such was the formula that made Take Me to Church, an uplifting dirge about losing your religion and finding yourself, the most streamed song of 2014 and the one that puts the wind beneath the title track from his new EP, Nina Cried Power (which is released by Island and produced by his long-time collaborator Rob Kirwan).

It’s coming up to four years since the release of Hozier’s debut album, and though his fan base remains committed the rest of humanity has not been hanging about to discover what he’s been getting up to. There has been some hype around his comeback, but nothing to disturb the livestock.

So his first new music – excluding a forgettable contribution to the Legend of Tarzan score, in 2016 – needed to knock the shutters off and give the masses a reason to be interested again, which Nina Cried Power surely does.

Described by the Wicklow artist as his tribute to the protest music of the American civil-rights era, the title track is a tree-flattening tour de force that explores broad themes of protest and liberation. (John Lennon, James Brown, Joni Mitchell and, as per the title, Nina Simone are among those shamelessly namechecked.)

Yet it backs up its implicit conceit of being a potential anthem for the Black Lives Matter age with chandelier-shaking arrangements and lifetime supply of gospel choirs. In the epoch of Trump and a resurgent right wing, here is the call to arms somebody needed to write. (Cynics might point out that, as with U2, Hozier has precision-tooled his angst for American audiences.)

It’s not quite Take Me to Church Pt II. If anything Nina Cried Power is even more gargantuan than that smash, with at least two separate choruses and endless stirring crescendos. There is also a tingling cameo towards the end from the soul maven Mavis Staples, with whom Hozier sang at Electric Picnic, before the full details of the new EP had been made public.

Hozier has confessed to feeling the pressure as he sat down to write a follow-up to his first record. It’s probably as well he took his time, because, if the first Hozier album contains instances of transcendence – Take Me to Church is basically Coldplay if they’d read the Old Testament and weren’t rubbish – there were also a few glib moments in that album that hinted at a last-minute rush.

Most egregious of all was Someone New, essentially James Blunt’s You’re Beautiful performed by a whiskery busker who wouldn’t mind sleeping in your shed, were that an option.

Happily, there are no such missteps here. (Whether he steers as careful a path on the follow-up album that he has hinted will see daylight in 2019 is harder to say.) After the bombast of Nina Cried Power Hozier gets something approximating his funk on, with the smokey NFWMB featuring an ominous acoustic guitar and a multitracked falsetto (and mildly rude lyrics: the title is an acronym of “Nobody f***s with my baby).

Finger clicks and a Keith Richards-type riff meanwhile usher in Moment’s Silence (Common Tongue). This is a vintage blues piece that aims high but features a rather generic vocal from Hozier. (For the only time on the EP he could be one of any number of striving troubadours who’ve been advised by their managers to listen to Sticky Fingers.)

Still, there’s a winning finish as he takes it down many, many notches with the gorgeous Shrike, a tender slow burner worked around an intricate guitar melody. It’s soft-focused and not too fussed about causing a splash.

From a rafter-bothering opening to a flickering-candle fade-out, the EP is discernibly the work of a songwriter who’s reflected on his triumphs, and his mistakes, and has returned determined to be a better artist. Fans will adore it. Those tempted to write Hozier off as an overhyped bleater might consider giving him another try.

All that remains is for him to lose the man bun.