Hozier at the Academy: ‘Gasps ripple across the darkened crowd’

Four years after his first album, the singer plays new songs in an intimate setting 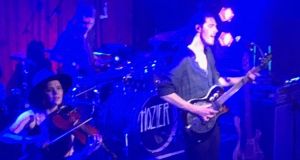 Hozier tells the crowd in the Academy: ‘It’s good to know you’re here’

Hozier’s six-foot-plus frame emerges on to the stage of the Academy in Dublin. Gasps ripple across the darkened crowd. When Hozier opens with the thundering chords of To Be Alone, you just might have been alone with the Bray-born musician and his band.

Playing his second sold-out night at the venue, Hozier welds together the familiar and the yet-to-be-heard. In a soft-spoken contrast to his powerful vocals, he informs the audience that he’ll be playing new material from the Nina Cried Power EP, which is set to be released on Thursday. Another wave of exaltation. We’ve missed him.

After the acclaim for his 2014 self-titled album, his most recent offering was 2016’s Better Love, a track for the Legend of Tarzan film. His set of intimate charity rehearsal gigs at the Academy this week – all proceeds from the gigs are going to Safe Ireland, One In Four, and the Peter McVerry Trust – brings forth the highly anticipated follow-up.

Another song prefaced with being 'a fun one. It’s a love song for the end of the world'

In old and new tracks, you hear the echoes of Hozier’s soul-and-blues-playing upbringing. It’s in Jackie and Wilson, a homage to the American soul singer Jackie Wilson. It’s in the debuted material against the backdrop of gold light. And it’s in his presence, both in vocal belts and spoken words.

To our delight, in his polite request that we refrain from filming new songs, he refers to us as “a bunch of sounders”. He explains the origins and inspirations of tracks set to appear on Nina Cried Power. One song captures a peculiarity of the natural world, while another is prefaced with being “a fun one. It’s a love song for the end of the world.”

With every opening intro of his well-known tracks, the room gasps. A single spotlight hits him as he readies himself to play Cherry Wine. Hozier, in his modest fashion, reassures us. “It’s okay”, he coos. “It’s good to know you’re here.”

After introducing and thanking his band, Hozier readies us for his farewell. A soulful hum leads us into Work Song, a track from 2014 which he once described as, “a little story song”. A story of reckoning and unconditional love told through a rich vocal, it is anything but little.

The crowd joins in with the final rounds of the chorus, and the final reverberating line hangs in the air: “No grave can hold my body down. I’ll crawl home to her.”

Hozier joins his band for a single bow, and they dart backstage. The four-year wait was well worth it.