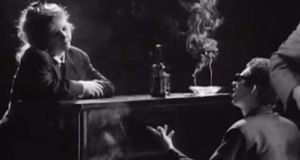 A screen shot from the official video of Fairytale of New York.

Shane MacGowan has pointed out that the characters which appear in songs or stories are not always “angels” and sometimes it is necessary to make them “evil or nasty” so a story can be told effectively.

The former lead singer with The Pogues felt compelled to issue a statement to Virgin Media TV last night in which he explained his use of the word “faggot” in the Christmas song Fairytale of New York after objections were raised in some quarters earlier this week.

“The word was used by the character because it fitted with the way she would speak and with her character,” he said. “She is not supposed to be a nice person, or even a wholesome person. She is a woman of a certain generation at a certain time in history and she is down on her luck and desperate.”

The singer added that he did not want to get into an argument about the song and said he would have no problem with that word being bleeped out during radio airplay.

“If people don’t understand that I was trying to accurately portray the character as authentically as possible then I am absolutely fine with them bleeping the word but I don’t want to get into an argument,” he said.

Earlier this week 2FM DJ Eoghan McDermott posted a sequence of tweets highlighting some discomfort with the song.

“I asked the two gay members of my team how they feel, since faggot is their N word. If people want to slur the gay community, this is their most powerful weapon,” he said. “One favours censoring, the other outright not playing it. Neither like it. Simples.

“Phrases that have zero social utility should fall away,” the series of tweets continued. “Enough vitriol out there without gay people having to feel uncomfortable so people that aren’t affected by an insult can tap their toe. Black Eyed Peas “Let’s Get Retarded” changed to “Let’s Get It Started” - rightly so.

Nobody complained. The fact this song is a classic isn’t a strong enough defence to not at least censor it. We censor shit, fuck, ass, weed and loads of other comparatively benign words in songs. It’s not a big ask.”

In response to the statement by MacGowan the radio presenter returned to Twitter to make clear that nobody on his team had asked anyone at RTÉ for the song to be banned or censored.

He said his initial point was “we beep out relatively harmless swear words all the time on radio to appease literally everyone.”

He added that the “idea of beeping one word on daytime radio didn’t seem so radical given this particular word packs quite a lot of punch from many people and is used as a powerful slower outside of this song I’m not ashamed to point that out even if it is unpopular”.

He finished by reiterating that he didn’t campaign for anything in RTÉ and said “they’ll play it like they always have, so let’s all breathe. The world will keep turning and I hope we’ll all be sound to each other. The world needs more of that.”

And as far back as 2007, the BBC decided the duet was overly offensive - after 20 years of playing it as it was written - and a decision was taken to fade out the words “faggot” and “slut” in order not to offend listeners.

That moved prompted a flood of complaints and the radio controllers backed down and allowed the song to be played uncut.