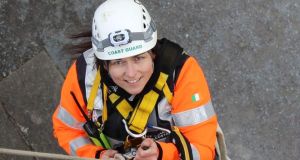 Caitriona Lucas, the Coast Guard volunteer who died when a rigid inflatable boat flipped during a search operation at Kilkee, Co Clare

The final report into the death of Irish Coast Guard volunteer Caitriona Lucas off the Clare coast over two years ago is highly critical of safety management within the State’s rescue service and calls for a review of criteria for launching rescue craft.

The Marine Casualty Investigation Board (MCIB) recommends that the Minister for Transport ensure these criteria define “appropriate responses” when the mission involves recovery – as in of a missing person at sea – rather than search and rescue.

The report, due to be published today, finds no evidence of any “effective management system” or establishment of criteria for oversight of Kilkee station, of which Ms Lucas was not a member but had agreed to assist on the day she died.

The report is also critical of failure to adequately consider new technology or alternative means of search and recovery, and says the Delta rigid inflatable unit (RIB) that Ms Lucas was crewing on was used “outside” the Irish Coast Guard’s own defined operational limits.

Ms Lucas (41), who was one of the most highly experienced members of the Irish Coast Guard’s Doolin unit, had agreed to help out the Kilkee unit in its search for a missing man.

The mother of two and librarian from Liscannor, Co Clare, died when the RIB was hit by a wave in a surf zone and all three crew on board were thrown overboard. The three lost their helmets, lifejackets were not inflated and the Mayday was issued through the only working radio – a personal VHF radio owned by the deputy coxswain.

Transmission difficulties impeded the Mayday broadcast, and the alarm was raised by an eyewitness. The shore response was “immediate”, according to the MCIB inquiry.

Ms Lucas followed training procedures in remaining with the RIB but was repeatedly washed off by waves, and lost her grip. A postmortem identified that she had sustained a head injury. The two Kilkee volunteers were rescued.

The MCIB report’s criticism of management at Kilkee extends to “critical deficiencies” with the boat’s communication and navigation equipment.

It also notes that there was a similar incident – albeit with no loss of life – off Dingle, Co Kerry, in 2014 and notes that subsequent safety recommendations for the Irish Coast Guard arising from this were not “fully implemented” in the intervening two years.

The report finds the Kilkee Delta RIB was not licensed or certified as per statutory requirements for passenger boats, did not have a ship’s radio station licence, and its coxswain did not hold the required statutory operator’s licence.

Responses to the MCIB’s initial draft are published with the final report, and include a submission by Ms Lucas’s next-of-kin–her husband, Bernard.

Mr Lucas questions why the report does not comment on why the crew’s helmets and lifejackets did not operate properly, and says he believes that a contributory factor to the accident was “bullying and harassment” in the Kilkee unit in the preceding couple of years from when a new officer in charge took over.

“The Kilkee unit had lost an awful lot of experience, and morale within the team was very bad,” Mr Lucas says.

A separate response by Kilkee deputy officer in charge Orla Hassett also expresses concern about various safety and management factors, an inaccurate location given for the incident, and says she was instructed on “numerous occasions” not to inflate the bladder of her helmet, which is fitted to ensure a helmet stays on during impact.

Martony Vaughan, the officer in charge of Kilkee at the time of the incident, told The Irish Times he would not respond at present to the claims made in the report.

In a lengthy and detailed response, the Irish Coast Guard called on the MCIB to conduct a “thorough reappraisal” of the draft report.

The Irish Coast Guard expressed concern about “confusing or misleading presentation of evidence” in relation to information on weather forecasting and sea conditions, some of which was amended in the final report.

The Irish Coast Guard pointed out its rescue craft are not passenger boats and not bound by this legislation. It also defended its safety management system and said it was a “significant leap” to suggest “one tragic accident” in one unit was representative of a whole organisation.

The Irish Coast Guard said that risk is “inherent” in everything it does, and it has been working “diligently” to further enhance “robust practices”.

The Health and Safety Authority has been conducting a separate investigation into Ms Lucas’s death.