Death and the salesman: running a record shop with cancer 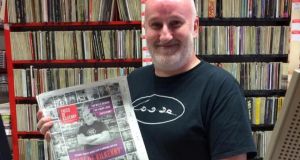 The late Willie Meighan of Rollercoaster Records in Kilkenny

Speaking to people about their passion and their time spent working in music is a pleasure, but all the talk of work evaporates in the face of life-changing news, which Willie Meighan, the proprietor of Rollercoaster Records in Kilkenny, shares in the first few minutes of our chat. Meighan has cancer and recently found out it’s terminal.

“I got diagnosed nearly a year ago but they only told us last week that it was incurable,” he says. “How long I have left I don’t know. It could be weeks, months but very unlikely years. I’m just taking the time as it comes, you know?”

Meighan is pragmatic about his prognosis and has continued to do bits and pieces for the shop that he so clearly enjoys running. He does orders from home, and his staff look after the day-to-day running. He was also booking gigs in Kilkenny but he has had to let others look after that end of things.

Meighan started working in the shop in 1990 when it was a Top Twenty. He was managing it within a few months and, in 2003, he took it over with Darragh Butler (formerly of Kerbdog) and rebranded it Rollercoaster. He has clocked up 27 years working in the shop.

“I used to say to people, you’d get less time for murder but I could have murdered a few people at this stage and got away with it,” he says, laughing.

“We haven’t really discussed where we go from here,” he says of the future of the shop. “Not to be flippant about it, but it won’t matter to me. I won’t be around. It’s up to the boys whether they want to keep it going.”

Despite his prospects, Meighan is clearly as passionate about the shop and the community he’s helped build there. The active Facebook group for the shop subtitled “The happiest little record shop in the world” has just shy of 4,000 members. It hasn’t gone unnoticed. Meighan has been asked in the past to discuss his social media success with others.

“I had a guy from Diageo ask me would I go down and talk about my social-media strategy to a conference for off-licences. I had to say to him, ‘Do you actually think there is a strategy involved?’ It just took on a life of its own when we set up the Facebook page.”

The humble record shop has seen a lot of changes in the past 27 years, formats being the obvious one. “I see quite a few people who got rid of their vinyl collection back in the day to change to CDs. And, they’re now getting rid of their CDs to rebuy the vinyl they got rid of. I suppose people are probably fed up of reading about the vinyl revival at this stage, but it’s certainly still growing and growing year by year. But there are still a lot of people out there buying CDs – you’d be surprised.”

Meighan says the core role of a record shop hasn’t changed. It’s still about trust, recommendations and community in the shop, as well as online.

“We might be selling less overall, but it’s still about building up trust between you and the customer. Even in this day and age, with the Spotify playlists and whatever else it is, I still think that personal contact, whether that’s coming from me or whether it’s the customers chatting in the shop and recommending each other things, is important. That hasn’t changed in 20 or 30 years.

“There’s also still that sense of the community, that hub in the town, for a certain type of character: whether it’s bands getting together or even through the social media page, lads connecting and recommending each other music when they’d never seen each other before.”

What has changed and affected recent closures of bricks-and-mortar shops in Ireland over the past 10 years has been increased competition for customers’ disposable income. Music isn’t the dominant culture any more, and Meighan sees it in the lack of bands coming through in Kilkenny.

“I don’t know what to put that down to. I think the fact that there’s so much competition these days – whether it’s video games or Spotify or Netflix, there’s stuff coming at people from a hundred different angles.”

There is still a younger audience coming into the shop. Teenagers and people in their 20s are buying vinyl, and Meighan reckons they are clued-in customers.

“They might buy the Velvet Underground and The Smiths or whatever as well as Grizzly Bear and Arcade Fire. They’re not beholden to any particular sound or genre. A record shop isn’t as intimidating as it used to be for them to go into because they have all the info already.”

Meighan has been working in music for 27 years. He’s well-loved and respected in the Irish music industry. But with his cancer, he doesn’t know how much time he has left. I ask him what music means to him now.

“In a way it means more than ever. I’m listening to as much as I ever did. The one sad part of it, you’re not going to hear everything before you go. That’s the same for all of us. It’s more of an immediate worry for me now at the minute. I’m still going to keep tapping away with the shop and the gigs. I have no idea how long I’m going to be here and I’m just going to make the most of it while I can.”

Don DeLillo: ‘Conspiracies have always been on my mind’
Real news has value SUBSCRIBE